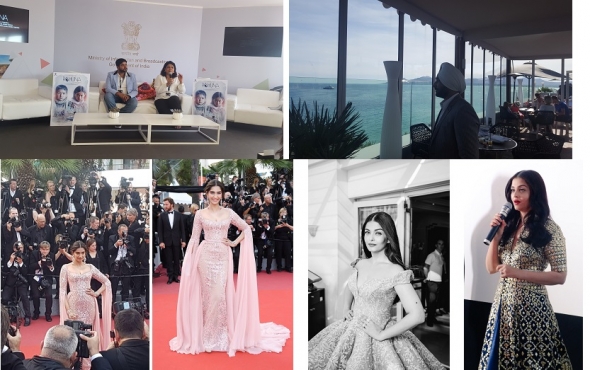 IF THERE IS one Indian film star walking not walking the Red Carpet here but still smashing it is Priyanka Chopra.

The eponymous Bollywood babe is not in Cannes but her mother, Dr Madhu Chopra and brother, Siddharth are at the film festival and used the Indian pavilion here to announce that they continue to look for films to produce and will focus on Indian regional language films.

“It’s a difficult process,” conceded medical doctor Madhu. “Priyanka has to okay the scripts and only gets Saturday and Sunday and she is based in New York.”

The pair spoke for around 30 minutes and took a few questions about their production house, Purple Pebble Pictures, which PeeCee, as she is known popularly, heads up.

Most of the production team are based in her home city of Mumbai and PPP has already produced one regional language film that has been greeted with both great critical and popular success – winning a number of awards and enjoying healthy box office returns – ‘Ventilator’ in Marathi and starring among others ‘Lagaan’ director, Ashutosh Gowariker.

It’s a story about an extended family’s tribulations as the head of the family lies in a hospital on yes, you guessed it, on a ventilator.

Later Siddharth told www.asianculturevulture.com the company was consciously keeping away from what might be described as ‘Bollywood’ films.

“We do have two films in Hindi,” he told us. “But we have not decided whether to put music into them (for them to be like a Bollywood film).

Both talked at some length about their next film, ‘Pahuna’ – a film made about Sikkim and refugees who flee there. Situated between India and Nepal, the film centres around three children and most of the crew but for the director are from the tiny Himalayan Kingdom.

A short trailer of the film was shown to the gathered audience and it appeared to embody high production values and strong cinematography.

‘Pahuna’ is expected to go out to film festivals first before a more general global release. The company has its eyes on global distribution.

Dr Chopra also said that her daughter is very particular about the kind of films she wants to produce.

“We don’t want any films with bad language or that diss women,” she said.

*Also in Cannes is Satinder Saartaj, the Sufi-singer, composer and songwriter, who has a debut film out later this summer.

He walked the Red Carpet at Cannes and talked to Sailesh Ram, editor of www.asianculturevulture.com about being in Cannes and what it was like to play the last Sikh King, Maharajah Duleep Singh.

This story should be dear to any keen student of Indian history – Prince Duleep (as he was also known) was spirited away to England as a boy and was brought up in the Christian faith and practically converted to being a pukka English gent. He became a friend of Queen Victoria and lived much of his early life at Buckingham Place. However, as he got older he realised that he had been disposed of by the British and that India was now in their firm grip- but along with his mother Rani Jindan, played by Shabana Azmi, the pair began to plot resistance. However it ultimately came to end in France.

Watch out for video interview with Sartaaj explaining this and more.

*Without any Indian or South Asian films in the official competitive sections, the other main interest here has been the L’Oreal Paris India ambassadors.

Sonam Kapoor walked the Red Carpet here just a little while ago and Aishwarya (Ash) introduced her film ‘Devdas’ to a selected audience at L’Oreal beach cinema. The cosmetics giant is celebrating 20 year of Cannes and the film starring Ash and now Bollywood megastar, Shah Rukh Khan, was the first to be shown in an official capacity after a long gap.

Director Sanjay Leela Bhansali, one of Bollywood’s true auteurs is man much admired in these parts and Ash said the experience of it screening here in 2002, and arriving in horse-drawn carriage and experiencing a long standing ovation remains of one of her most cherished and potent memories. She was practically mobbed after she introduced the film.

Both Ash and Sonam did some press yesterday at the L’Oreal Paris beach facility next to The Martinez Hotel, where they stay.

Privacy & Cookies: This site uses cookies. By continuing to use this website, you agree to their use.
To find out more, including how to control cookies, see here: Cookie Policy
← UK Asian Film Festival 2018: It’s a wrap as stars turn out for feel-good closing film ‘Boogie Man’ and festival awards presented…
Diversity in the Arts debate – Cambridge Union panel including Sailesh Ram, acv editor, want those in power to help spearhead change… →