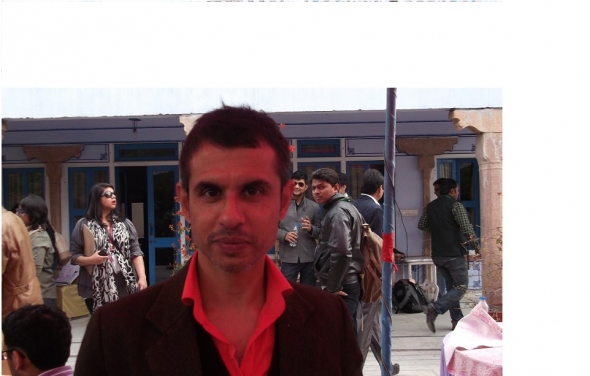 IT WAS LOVE that first drew unpublished writer Rana Dasgupta to Delhi and away from his British Asian roots.

Now 14 years later with a Commonwealth Writers Prize for his first traditional novel, “Solo” (2010), and a John Llewellyn Rhys prize nominated collection of connected stories in “Tokyo Cancelled” (2005), he has just published his first non-fiction work in the UK to great acclaim.

“Capital”, about Delhi, the place he now calls home, was declared by well-known South Asian specialist William Dalrymple at the Jaipur Literature Festival (JLF) in January, “as one of the books about India to come out this year”.

At a drinks party in London on Thursday (March 13) to celebrate the UK publication Jamie Byng, publisher and managing director of Canongate, responsible for the UK publication of “Capital”, said: “It has relevance and resonances for the whole world.”

Dasgupta said the title of the book was inspired by what he saw as the “onslaught of capital”.

“It’s about Indian capitalism which is not much written about,” he explained.

But “Capital” is not just about Indian capitalism, but a new and different form of capitalism, which is not like anything seen in much of the West.

In some ways, it’s a more hungry and voracious form of acquisition which can seem both more shocking and brutal to those from outside or different cultures.

Das Gupta, 42, had originally gone to Delhi to be with the Indian woman, who later became mother of his daughter and that – and the city’s charms have almost literally grounded him into the soil of India’s capital.

“I did have expectations (of the city),” he told www.asianculturevulture.com in Jaipur earlier this year. “I moved to Delhi to be with someone I was in love with, and I was coming to be with her. I didn’t know long that was going to be – even in the best case scenario, she and I would leave – staying in Delhi wasn’t really on the map.”

And yet 14 years later, he has just published “Capital”, though he is no longer with the mother.

The book has been warmly received in India, though some have made something of Dasgupta’s British credentials (born and raised here as he was) and his non-Punjabi roots – much of his analysis examines the impact of successful Punjabis in Delhi.

But Dasgupta is not one to get too overly excited either way – by praise or criticism.

He possesses a cool detachment – something which must have stood him in good stead as he trundled around India’s capital interviewing some of its wealthiest citizens.

For him, Delhi represents India’s 21st century, just as Kolkata did in the 19th and Mumbai in the 20th.

At the JLF, he described the book as a response to an “intense time”, not just for him, but for many inhabitants of the city and it was spurred on by a trend that, he felt, had an essentially global character.

Dalrymple and Dasgupta in Jaipur had discussed whether Delhi could be considered a global city, much in the same way people talk about London, New York, or even Mumbai.

Dasgupta believes it can.

“That’s not based on how much fun it is,” theorised Dasgupta to www.asianculturevulture.com in Jaipur. “Its commercial rise is at the heart of it. It’s similar to Moscow’s and Beijing’s, and in that sense, Delhi is a global city and represents a certain kind of global energy to do with money.

“It’s not a fun place (in contrast to Mumbai or London),” continued Dasgupta warming to the theme, “because you don’t have necessarily fun people (in it) – they are actually very harsh people.

“In Delhi, it’s a kind of monopoly mentality, it’s just like the Russian thing, getting your monopoly on that resource, whether it’s land or telecoms, and all about keeping people out,” he added in Jaipur.

And yet he chose to make the place home?

In the talk, he said that he found a like-minded community of artists, writers and other creative people who felt excited and enthused about their future.

“Delhi in 2000 was a very exciting place and there were lots of reasons to think this was a good place to be.

“For someone who wanted to write books, there were a very exciting group of people (here) and they were just starting to do things – Arundhati Roy had won the Booker (for “The God of Small Things” in 1997).”

He was 29-years-old and had dreams of writing books, having graduated from Oxford and doing stints of studying and working in marketing in France, Malaysia and the US.

“I began writing in Delhi essentially. There was an exciting arts scene and people were setting up exciting institutions, such as Sarai (a collective of journalists, writers, filmmakers and artists determined to engage with a wider public than simply other intellectuals) and my partner was involved in that and her friends were filmmakers and artists and these people in Delhi had an immense sense of their own possibilities – much greater than the people I had been hanging out with in New York – for whom the world of publishing and everything was quite closed.”

After New York, where he had been living, Delhi was affordable and artistically encouraging.

At the Jaipur talk, he told the audience there was space for workshops and it was a cheap city for accommodation. He got a job in marketing before landing his first book contract from Delhi.

He said the fact that the Indian capital is his home now hasn’t still quite sunk in – “The moment you described still hasn’t happened to me – I am a permanent wanderer,” he reflected in Jaipur, when asked about Delhi being his home.

We’ve come full circle and so he has too, in some ways. After all, his father left India to make a new life for himself in England, marrying a local and raising a family and here was his son charting a reverse journey.

“When I came to India and the months drew on, my father asked: ‘What is your plan?’. When I got my (first) publishing contract he realised, ‘he does have some sort of plan’. My returning to India was laced with a lot of anxiety (for him).”

It seems to have worked out – his parents were obviously proud of their son’s considerable achievements at the drinks do.

And so what next for this “permanent wanderer”?

“My daughter is only seven and so I’ll be in in Delhi for another decade, which will pretty much make 25 years” Dasgupta answered.

“I am writing a few things, a movie set between Bombay and New York, and a novel set in China.”