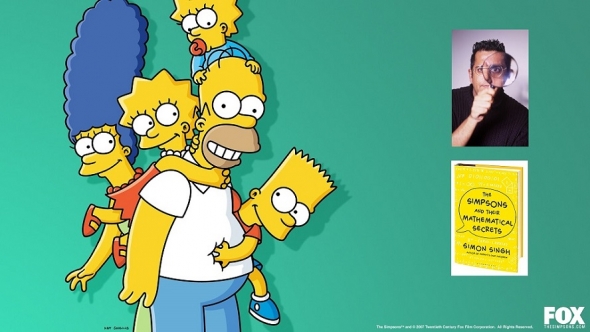 SIMON SINGH – the writer behind the marvellously innovative and hugely entertaining book, “The Simpsons and their Mathematical Secrets”, has devised a special ‘Christmas’ quiz exclusively for www.asianculturevulture.com.

You can win a signed copy of his latest book by entering the competition and answering three questions, Simon has himself set, correctly.

Wining entries will go into a draw for the prize. What are you waiting for? See below for competition details.

In “The Simpsons and Their Mathematical Secrets” Singh delves deep into one of the most successful TV series ever produced.

The popular prime-time US cartoon sitcom, now in its 25th year, has won 27 Emmy Awards – but what people didn’t know or realised – until now, is that the comic capers of the Simpson family are shot through with mathematical problems and issues.

Singh uncovers the many subtle, and not so subtle, allusions and mathematical references that litter the long-running TV comedy cartoon centred around hapless Homer and his off-beat family in Springfield, US.

From the origins of numbers, the notorious P √ NP problem, Homer’s Last Theorem (as opposed to Fermat’s Last Theorem, which Singh covered in his last book) to an easily understood concept of π, Singh unravels the mystery and magic of arithmetic.

It’s a virtuoso book, informative as it is entertaining and fun, and no self-respecting Simpson fan or maths geek, could fail to be charmed by it.

Along the way, Singh looks at narcissistic numbers, prime numbers, taxi cab numbers, infinity and the topology of doughnuts (for which Homer has an unusual passion).

Through the figure of Apu, an Indian origin scientist character, viewers are introduced to some of the most perplexing themes and idiosyncrasies of the subject.

Singh uncovers the rich vein of mathematical queries and questions as posed by the writing team behind “The Simpsons”.

David X Cohen, Al Jean, Jeff Westbrook, and Mike Reiss are mathematicians in their own right and have years of experience in the subject of maths with Singh drawing the parallels between maths, comedy and fun contained within the team’s lovable cartoon creations.

And Singh echoed Simpsons’ writer Matt Selman when he said: “The more you think about logic, the more fun you have twisting it and morphing it.”

Some of the ongoing dilemmas of maths have also found their way into “The Simpsons” sister cartoon series, “Futurama”.

Singh is a celebrated science writer and his last book, “Fermat’s Last Theorem”, was both a best-seller and made into BAFTA-award winning TV documentary, directed by Singh himself.  A former CERN-physicist, he has a PhD in particle physics from Cambridge University and is a former BBC producer and comments widely in the media on science matters.

So don’t hold back  – get that brain into gear and apply your genius to Simon’s Simpsons  festive little teasers…you might need the help of Google, he suggests…

1. Springfield’s most famous resident of Indian descent, Apu Nahasapeemapetilon, is actually a keen mathematician and fan of science. In the episode, “Much Apu About Nothing” (1996), he reveals some of his backstory: “I came here shortly after my graduation from Caltech.” What is Caltech short for?

2. Apu has a PhD in computer science. Who was his supervisor?

3. Apu can recite pi to 40,000 decimal places, but this number actually has an infinite number of decimal places. What is the name for this sort of number?

Answer: Pi is an irrational number