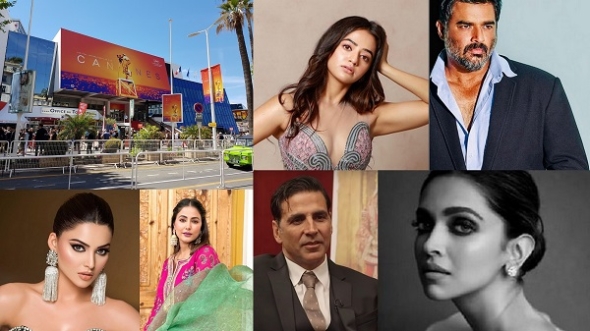 The Indian presence will be strong this year…

IT’S going to be a very busy Cannes with lots of Indian stars heading for the famed Cannes Croisette this year.

The Cannes Film Festival or Festival De Cannes, gets under way on Tuesday, May 17 and finishes on Sunday, May 29.

First up and going in an official capacity is Bollywood icon Deepika Padukone. She has been selected to be on the main competition jury and joins a very select band of Indians who have been on previous juries: Sharmila Tagore, Vidya Balan and Nandita Das are just some of the others who participated. This year the jury president is French actor Vicent Lindon and the other members of the main competition jury are British director-writer Rebecca Hall, Swedish actor Noomi Rapace, Italian actor-director Jasmine Trinca, and Iranian director, producer and screenwriter Asghar Farhadi and Ladj Ly, the French director, screenwriter, actor and producer, American director-writer Jeff Nichols Norwegian director-writer Joachim Trier. Lindon is well known in France and was one of the stars in ‘Titane’, director Julia Ducournau’s searing identity tale which won the Palme d’Or – the top prize at Cannes in 2021.

Also part of the official selection and enjoying a special screening at the Cannes Film Festival is the Indian, ‘All that breathes’ – those of you who follow our international film festival coverage will recognise this film from Sundance early this year (see link below). It won an award at the festival and is very likely to be well received in Cannes – a year after Rahul Jain’s ‘Invisible Demons‘ (see link below) appeared in the Climate Strand is also about pollution in Delhi.

We have previewed the Pakistani film, ‘Joyland‘ which has been selected to appear in the Un Certain Regard (for new and upcoming directors) section and will screen on Monday, May 23. (See article link here). It will make history as the first film ever from Pakistan to show in an official selection category at Cannes. It is writer-director Saim Sadiq’s feature debut.

Among those others reported to be heading for the Cote D’Azur this year is South Indian favourite, R Madhavan (more on this below); Pooja Hegde, who was opposite the iconic ‘Baahubali’ star Prabhas in ‘Radhe Shyam’; Akshay Kumar* (See below for update please), who is understood to be spearheading the market presentation of ‘Prithviraj’ – a spectacular Bollywood epic set to release next month and who also marks 30 years of being in cinema; popular South Indian star, known mostly as, Tamannaah; ‘Elizabeth’ director Shekhar Kapur and music maestro AR Rahman who we interviewed in Cannes in 2017 (see link below) and attended also in 2019.

Veteran director Shyam Benegal is also set to be in Cannes with his film ‘Mujib’ (‘Bangabandhu’), a biopic about Bangladesh’s liberation leader, Mujibur Rahman. The film is believed to be supported by India’s National Film Development Corporation (NFDC) and the Bangladesh government.

Popular actor Hina Khan returns to Cannes after her debut appearance in 2019 and one of the newcomers to the Croisette will be Helly Shah. The TV star has just made a new feature, ‘Kaya Palat’ which is directed by Shoaib Nikash and is helmed by Rahat Kazmi, who is the writer and acts in the film. Kazmi is known to UK audiences and brought his feature ‘Mantostaan’ to the UK Asian Film Festival in 2017. ‘Kaya Palat’ is a thriller and set in Jammu and about rival mafia gangs that operate in the region. Shah is best known for her role in ‘Alaxmi: Hamari Super Bahu’.

It is understood six Indian films will premiere in the market section – among them Madhavan’s much anticipated, directorial debut, ‘Rocketry: The Nambi Effect’. Starring Madhavan and featuring Shah Rukh Khan, it is biopic about Nambi Narayanan, an aerospace scientist falsely accused of spying.

The other films are ‘Godavari’, ‘Dhuin’, ‘Alpha Beta Gamma’, ‘Boomba Ride’, and ‘Tree Full of Parrots’.

India will be the official country of focus for the market section of the Cannes Film Festival. This is the first time a country has been chosen like this – and occurs as both the film festival and India celebrate 75 years. It also appears to have all come together following the recent meeting between India’s Prime Minister Narendra Modi and President Emmanuel Macron recently, following the latter’s very recent election victory.

There will be a number of screenings and panel discussions and many leading figures from the Indian film industry are expected to be in Cannes along with India’s minister of information and broadcasting, Anurag Singh Thakur.

There will be a special screening of one of Satyajit Ray’s films as part of Cannes Classic (a strand showing old movies that have premiered at Cannes originally).

A party at the Majestic beach on Wednesday (May 18) will officially open the market section of the festival with Executive Directors Marché du Film, Jérôme Paillard & Guillaume Esmiol welcoming delegates.

There will be an India Forum, opening the conference section of the market on Thursday (May 19) and will feature a discussion on India: The Content Hub of the World’ – among those participating will be Apurva Chandra, India’s secretary of the ministry of information and broadcasting, Prasoon Joshi, chairperson of India’s Central Board of Film Certification and director Kapur.

Palliard & Esmiol said: “We are delighted to have India as our Country of Honour this year at the Marché du Film; and even happier to be able to share the celebration of our anniversary that we have in common – 75 years of Indian independence coinciding with the 75th Festival de Cannes!”

Chandra commented: “We are extremely proud to be the Country of Honour at the upcoming edition of the Marché du Film, in the 75th year of our independence.

“We are taking giant strides in making India the content hub of the world, and this collaboration will be crucial in making the world better acquainted with what India has to offer.”

The Boulevard de la Croisette or Promenade de la Croisette is the main throughfare in Cannes that runs by the sea and at one end is the Palais De Festivals building which houses the Grand Lumiere Theatre – which hosts all the red carpet gala premieres and at the other end is Palm Beach.

*Update 15.05.22 Just a little after this story was published, Bollywood star Akshay Kumar revealed that he had tested Positive for covid and was no longer travelling to Cannes. He tweeted his disappointment.

**News has reached us of another star heading to Cannes this year – Nawazuddin Siddiqui, who has been several times before and made his debut there with the film, ‘Miss Lovely‘ (2012), is set to receive an award at the French Riviera Film Festival (May 20-21). He is set to be awarded a Special Industry Excellence Award at the the VIP opening reception on Friday (May 20) at the Bel-Air Fine Art Gallery in Cannes. The French Riviera Film Festival (FRFF) was launched in 2019 and celebrates short form content created for film TV, web and all digital platforms. Free to attend screenings take place at Eden Hotel & Spa in Cannes, between 10am-3pm on the two days. For more information/itckets, please see https://frff.sparqfest.live/en/index.html