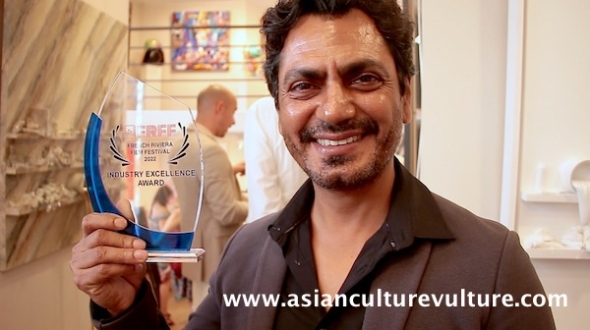 INDIAN star Nawazuddin Siddiqui was presented with a special industry award by a local short film festival recognising his unique contribution to Indian cinema yesterday (May 20).

Siddiqui looks set to follow now in the footsteps of his mentor, Irrfan Khan – as it has just been announced that he is set to play the lead role in a new US film, ‘Laxman Lopez’ which is set to be shot wholly in the US. Khan and Siddiqui appeared together in a number of films – but for many Cannes watchers, their respective roles in ‘The Lunchbox’ which enjoyed its world premiere in 2012 really stands out.

Siddiqui spoke to acv on the sidelines after the awards presentation – about his long association with Khan and honing his craft. (See our interview when it comes out later).

The star told www.asianculturevulture.com he will be going to New York to film later this year.
It is directed by Mexican Roberto Girault, who felt Siddiqui was the best man for the role – which is believed to be about a character who undergoes a transformation at Christmas time.

Siddiqui first appeared in Cannes with ‘Miss Lovely’ and returned for ‘Raman Raghav 2.0’ and was here for the world premiere of Nandita Das’s ‘Manto’. (See our interview then and previously).

Siddiqui is currently with the Indian official delegation here as part of the country of honour in the Marche du Film section; he remained at the event for a sometime talking to filmlovers, just after receiving the Industry Excellence Award from the two-day French Riviera Film Festival (FRFF), which concludes later today. It mostly celebrates short form content for all forms of platforms. The festival has its own award ceremony following its global entertainment showcase earlier this morning and VIP reception, marking the fest’s opening. Siddiqui accepted the award at Bel-Air Fine Art Galley in Cannes.

To come from us soon on YouTube (and here)

Interview with R Madhavan about his international film, ‘Rocketry: The Nambi Effect’

India Pavilion opening and party to herald India as the Country of Honour here at the Marche du Film.

Keep following us on social media and subscribe to Youtube to watch all these videos when they hit our YouTube Channel and hit the notification button to be the first to know – see you on the other side!