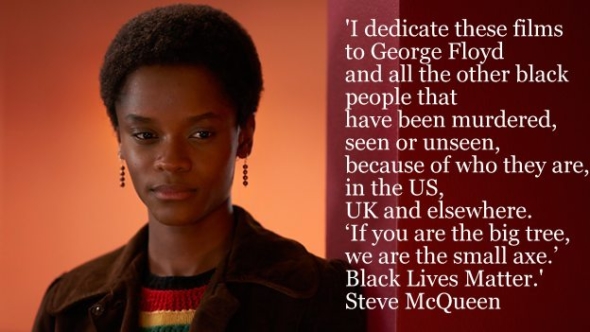 Just over an hour ago it was announced…

BRITISH black director Steve McQueen has dedicated two of his films given the Cannes garland this year to the Black Lives Matter movement, George Floyd and others who have been murdered in the US, UK and other parts of the world (see his statement in the picture above).

The two films, ‘Mangrove’ and ‘Lover’s Rock’ are part of a series of five commissioned by the BBC and are set to be broadcast on the channel later in the UK – to have two films selected for Cannes is unusual and certainly in recent years, unprecedented.

Earlier this evening, Thierry Frémaux, Cannes Film Festival general delegate and the festival’s president, Pierre Lescure announced and discussed briefly what films would have screened at this year’s festival.

Among the other films Frémaux and Lescure mentioned in Paris were ‘Summer of 85’ by Francis Ozon, ‘Ammonite’ by Britain’s Francis Lee, and following on from the success of his ‘God’s own Country’, ‘Falling’ by well-known actor Vigo Mortensen, ‘True Mothers’ by Naomi Kawse and Wes Anderson’s ‘The French Dispatch’ – these films and others were all set to screen at the Cannes Film Festival’s 73rd edition, until the intervention of the global pandemic and the cancellation of the original festival scheduled for May 12-23. More about this process in Previously (below)…

The murder of George Floyd has ignited a wave of protest and fury around the world and has given poignancy and power to the Black Lives Matter organisation, fighting racism and discrimination and supporting those seeking justice.

We will have more detail in a story (June 4) for tomorrow about the Cannes selections.