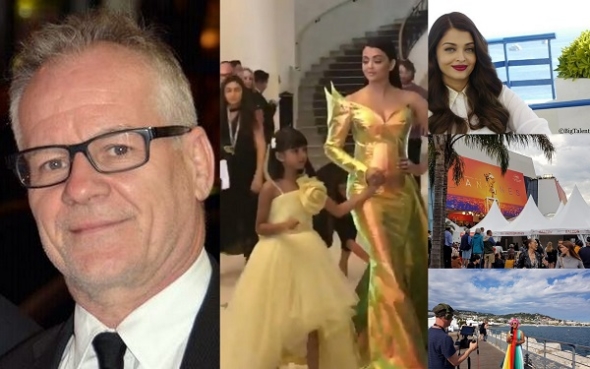 🎥 Cannes indicated it will partner with other festivals, and most substantially with Venice (September 2-12). Its precise fate is likely to be announced shortly.

🎥 Festival director (Delegate General) Thierry Frémaux announces two films would definitely have been unveiled in Cannes – ‘The French Dispatch’ (Wes Anderson); ‘Three Stories’ (Nanni Moretti) and hints that ‘Soul’ (Peter Docter) too would have featured too…

🎥 www.asianculturevulture.com would have been in Cannes today preparing for the 73rd festival which would have opened tomorrow (May 12-23). We look back at five years of covering the festival on video 2015-19 and editor Sailesh Ram reflects on not being at his 12th consecutive Cannes Film Festival…(coming)

THIERRY FRÉMAUX, the public face of the Cannes Film Festival, and involved in organising it for 35 years, has defended the primacy of films releasing in theatres and conceded to Screen Daily that a “physical edition of Cannes hard to envisage”.

The General Delegate outlined what the festival’s programme and outlook will be in the wake of the festival being cancelled from both from its original dates of May 12-23 and then the abadonment of the idea of hosting the festival at end of June to the beginning of July.

He told Screen Daily the festival will announce a programme in June for the Autumn. It is likely to involve events in cinemas – but he said the festival would be guided by the general public health situation in France – and said filmmakers were supportive of the idea.

He broadly dismissed the idea of a digital festival – while not seeking to criticise films that release online through streaming platforms. He indicated that Netflix’s ‘Da 5 Bloods’ by Spike Lee would have headed for the red carpet, but out of competition, of course this year.

In the wide-ranging Screen Daily interview about the festival and the film industry at large, he welcomed the support streaming services gave to filmmakers but was very firm about the primacy of the theatrical releases and Cannes’ focus on that.

He said all the films in this year’s selection were set to release by early 2021. He also explained that the films were unlikely to be categorised into sections as they usually are ie – Competition, Un Certain Regard, Directors and Critics and Out of Competition.

Some films not earmarked for a release this year, but selected by the festival could appear in a 2021 line-up. However, he said that the festival would start selecting films for the 74th edition in the Autumn as per the normal schedule of viewing and selecting films for next year. He said he had not noticed any drop-off in the number of films submitted for this year. He and he and his team, who worked from home, saw 1,500 films.

He also spoke of the huge impact of the crisis on the practical business of making films – and sympathised with actors and others – noting how important it was to regional and local economies and cited as India as a country which would be feeling such an impact.

The market section of the festival will be a digital version between June 22-26.

In March, the festival announced officially that it was scrapping hosting the festival on its original intended dates of May 12-23.

On April 14 – in the week when it would have normally announced its official selection, it dispatched a notice to the media, saying that the idea of hosting it in June-July was also not going to be possible, but it refused to cancel the festival outright.

Yesterday, Frémaux outlined that a festival in name will occur (- it remains vague -) in the Autumn and said details would be announced in June.

🎥 Sailesh Ram, editor of www.asianculturevulture.com looks back on 11 years (six with acv and three with Eastern Eye as editor of the newspaper)

🎥 See his interview with Shay Grewal of Sunny & Shay discussing 10 years of covering the festival. Look out also for more video content from previous festivals 2015-19, celebrating five years of covering the Cannes Film Festival with video – some of the best and funniest moments with acv presenters…

🎥 See new video content related to film (and the lockdown) coming to our YT channel soon – subscribe and don’t miss any of this! Click on the picture!

Privacy & Cookies: This site uses cookies. By continuing to use this website, you agree to their use.
To find out more, including how to control cookies, see here: Cookie Policy
← ‘When the crows visit’ – playwright talks misogyny, power relations and morality as premiere hits London
Hanif Kureishi: ‘I want to write for the stage’ again says writer whose adaptation of ‘My Beautiful Laundrette’ continues to make impact with audiences coming to it again and afresh… →