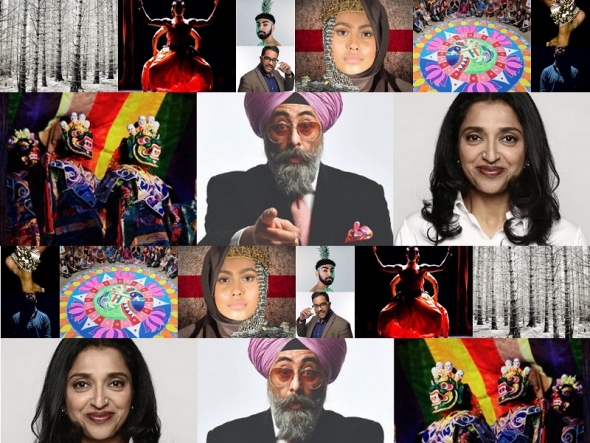 There are more than 2,000 acts about to be unleashed in the beautiful city of Edinburgh from today till August 27…

THE WORLD’S biggest multi-arts festival gets underway officially today (August 3) and as asianculturevultures (#asianculturevultures) we thought we would provide you with a very quick(ish – there’s quite a lot going on…) guide to the Edinburgh Fringe Festival.

Hardeep Singh Kohli – You-topia
One of Britain’s best known Asian comics is on home turf and has a new show and is promising “worldly wit and fabulous punchlines”. Be there or weep is the insinuation.
Details here: https://tickets.edfringe.com/whats-on/hardeep-singh-kohli-you-topia

Sindhu Vee – Sandhog
Everyone’s favourite aunty who is always ready to share a home truth or two, whether you’re ready or not (and on everything from her sex life to childcare arrangements). She’s been burning up the dowagers and the not so gentlemen who listen to Radio 4 with her patter. Most of us know it will be fun and funny… but don’t ask us about the title, we haven’t got a clue either.
Details: https://tickets.edfringe.com/whats-on/sindhu-vee-sandhog

Anuvab Pal – Empire
One of India’s best known comics comes to Edinburgh to talk about the original Brexit – confused? Don’t be, Britain’s get up and leave (the mess to others…) has happened before – 1947 to be precise, and hence why this show is called what it is. Don’t say you haven’t been warned…
Details: https://tickets.edfringe.com/whats-on/anuvab-pal-empire

Eshaan Akbar – Prophet Like It’s hot
He’s carrying a Qur’an and is going to point out the funny bits, apparently. Sounds intriguing and with temperatures rising and a favourable portrait in the Evening Standard, this could be a very hot ticket. Time to stand up and deliver, Mr Akbar. We are sure you will. Sort of. Maybe. Fingers crossed.
Details: https://tickets.edfringe.com/whats-on/eshaan-akbar-prophet-like-it-s-hot

Mawaan Rizwan – Juice
Actor, DJ, celebrated cross-dresser… he’s a force of nature (or should that be freak?) Never mind, take it in your stride…and we always look on the sunny and funny side, Mawaan. Take it away…
Details: https://tickets.edfringe.com/whats-on/mawaan-rizwan-juice

Akademi – The Troth
It premiered earlier this year at the Jaipur Literature Festival and we were there to witness. Spectacular, brilliant and touching, the setting of Hawa Mahal (known popularly as the Palace of Winds and has an inverted pyramidic structure), only accentuated the breath-taking narrative. A young man leaves the Punjab for King and Country…the rest really is history as brought to life by Britain’s longest-running classical Indian dance outfit, Akademi. More from us previously on The Troth and Akademi
Note – from August 10 only
Details https://tickets.edfringe.com/whats-on/troth

Lok Chhanda – Dashanan/Kabeera
A mix of disciplines from martial arts to acrobatics, and folk dance to more recognisably classical Indian dance manoeuvres, this narrates the tale of good and evil as represented by Ravabna, the evil demon and Kabeera, an implacable foe.
Note – from August 13-25 only
https://tickets.edfringe.com/whats-on/dashanan-kabeera

Alba Flamenca – India Flamenco
A perennial fave at the fest and once these two dance forms had a similar source it is believed. Mixing the strict disciplines of a classical form with the fiery Gypsy traditions and vocals for make a grand spectacle.
https://tickets.edfringe.com/whats-on/india-flamenco

Akram Khan
Not on the fringe as you might expect but the prestigious Edinburgh International Festival (August 3-27). Khan has a varied and eclectic programme – there will be a special page on www.asianculturevulture.com, including an interview with the star dancer published shortly. Find more detail there.
Among the shows: Slyvie Guillem – A Life in Progress (August 8-10); Chotto Desh (August 13-14); Xenos (August 16-18) and Kadamati (August 22).
More detail here: https://www.eif.co.uk/

Tibetan Monks from Tashi Lhunpo Monastery – Tibetan Monks Sacred Dance
Grand, mystical and Buddhist in both spirit and nature, practitioners of this unique art form come to Edinburgh to dance, chant, mesmerise to music rarely performed in the UK.
https://tickets.edfringe.com/whats-on/tibetan-monks-sacred-dance

Ravi Agarwal – Nadar/Prakiti
A unique project, Ravi Agarwal is a multi-disciplinary artist who has explored the issue of sustainability both in the Indian and Scottish contexts, spending recent time in the wilds of the country and examining how communities might ‘re-wild’ or ‘take back’ certain areas and regions and looks at similarities and differences in the two countries. The exhibition runs until October 20.
https://tickets.edfringe.com/whats-on/nadar-prakriti
https://www.edinburghprintmakers.co.uk/exhibition/nadar-prakriti

Winding Snake Productions – Rangoli:The Art that Binds
Anyone who has been to India during festival time will see many homes adorned with special and striking flower arrangements on the ground. Rangoli is a popular art form in India and you can try it for yourself as well as see and talk to Rangoli artists.
Details: https://tickets.edfringe.com/whats-on/rangoli-art-that-binds

Islam Festival Edinburgh
An opportunity to see and engage with one of the world’s great faiths and as practised in Scotland through the open door of the Central Mosque in the city. There are interactive displays and there is a chance to learn and explore.
Details: https://tickets.edfringe.com/whats-on/islam-festival-edinburgh-2018

ArtSquat (charity) – Spirit of Kathmandu
Photographers Carl Whetham and Kishor Dangol present a series of pictures taken before and after the Nepal Earthquake of 2015 with the help Artsquat, a Scottish charity which assists low income artists to display their work.
Note August 17-19
https://tickets.edfringe.com/whats-on/spirit-of-kathmandu

Paines Plough and Clwyd Theatre
BAFTA breakthrough writer Vinay Patel (http://asianculturevulture.com/portfolios/bafta-breakthrough-brit-vinay-patel-writing-future/) heads to Edinburgh with ‘Sticks and Stones’, a play which is something of moral parable about friends and what they say to each or don’t and the repercussions in this time of heightened social contact, via digital media…
It’s a busy time for Patel as his epic and personal, ‘An Adventure’ play comes to The Bush Theatre in London next month. He spoke to to us about it briefly in our 2016 Bafta interview.
Details: https://tickets.edfringe.com/whats-on/sticks-and-stones

A Lung and West Yorkshire playhouse co-production – Trojan Horse
Remember the brouhaha in Birmingham schools about a potential takeover from supposedly ‘hardline’ radical Muslims? It turned out to be false – now theatre company Lung which specialises in ‘real-life drama’ take verbatim accounts from teachers and governors caught up in the furore and asks searing questions about racism, identity and a culture of suspicion.
Details: https://tickets.edfringe.com/whats-on/trojan-horse

Mulberry Theatre Company – Cry God for Harry, England and St George
Fringe First Winners and a theatre company from a now famous all girls school in East London turn their hands to Shakespeare and ‘Henry V’, but what does such a play mean to a group of girls whose lives are quite removed from Shakespeare’s traditional heroes and what does English nationalism mean to a nation as diverse and varied as our own…? A world premiere no less.
Note: August 3-4 and 6-11 only
https://tickets.edfringe.com/whats-on/cry-god-for-harry-england-and-st-george

This isn’t a comprehensive list but just a selection of what caught our eye and should interest any asianculturevulture (white,brown, black – our universe is beautiful, share and enjoy!)

If you want to tell us about anything at #Edfringe, drop us a line editor@asianculturevulture.com – thanks!

Privacy & Cookies: This site uses cookies. By continuing to use this website, you agree to their use.
To find out more, including how to control cookies, see here: Cookie Policy
← Darbar Festival 2017: Nishat Khan and the soul of Khayal – Class acts, joyous and magical…
Akram Khan curtain-raiser for Darbar Festival was mesmerising and musical evening continued to stimulate the soul… →