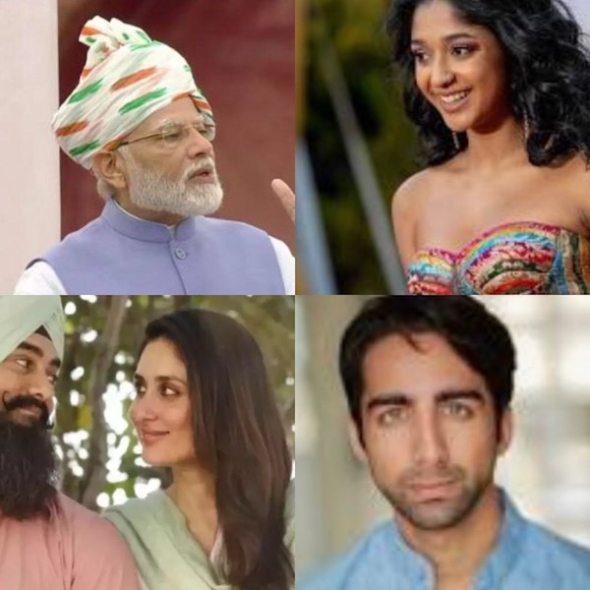 RESPECT for women was a vital part of Indian Prime Minister Modi’s speech to celebrate 75 years of Indian Independence today (August 15), saying that it was an important pillar for India’s growth. The Prime Minister spoke of his efforts to make India a developed country in the next 25 years, admitting: “It’s a big resolution, and we should work towards it with all our might”. India’s tricolour flag was hoisted by Chief Justice of India NV Ramana in the Supreme Court, and Modi offered tributes to freedom fighters including Mahatma Gandhi and Jawaharlal Nehru. He also called for an end to corruption and nepotism in an address from the Red Fort in Delhi. He later acknowledged the warm statements from around the world, saluting India on its 75 years.
Among these was outgoing British Prime Minister Boris Johnson tweeting: “Congratulations to the people of India on 75 years of independence. During my recent visit to Gujarat and New Delhi I saw for myself the thriving Living Bridge between our countries. I look forward to seeing these bonds go from strength to strength in the next 75 years.” The Living Bridge refers to Brits who trace their heritage back to India and continue to visit and spend time in the country with extended family and friends and the UK continues to welcome highly skilled Indians to work and study in the country.
US President Joe Biden issued a statement, saluting India, Indians, and Indian Americans, saying: “As people around the world, including nearly four million proud Indian-Americans, celebrate the 75th anniversary of India’s independence on August 15, the United States joins the people of India to honour its democratic journey, guided by Mahatma Gandhi’s enduring message of truth and non-violence.”
French President Emmanuel Macron of France also paid tribute: “Dear friend @NarendraModi, dear people of India, congratulations on your Independence Day! As you proudly celebrate India’s stunning achievements in the past 75 years, you can count on France to always stand by your side.” He also posted to Facebook in both Hindi and French: “Together, we have forged a strategic partnership that makes both our countries stronger. Together, we are capable of finding solutions to global challenges, making the world safer, and bringing prosperity and progress to our peoples.”
Also congratulating India was Australian Prime Minister, Anthony Albanese, who said: “All Australians applaud India’s successes and the many achievements that define this great country and its people. We also give thanks for the contribution of our Indian-Australian community to our society, to our culture, to our country, and to the links between our nations.” Russian President Vladimir Putin also praised the country: “Please, accept warmest congratulations on the occasion of the 75th anniversary of India’s independence. Over the decades of independent development, your country has achieved universally recognised success in economic, social, scientific, technical and other fields. India rightfully enjoys considerable prestige on the world stage and plays an important constructive role in resolving pressing issues on the international agenda.”

MINDY KALING’s Netflix series ‘Never Have I Ever’ is back for a third series and had its premiere in Los Angeles on Thursday (August 11).
The show explores high school, love and life lessons but this series focuses on adult struggles as well. Throughout the series’, Canadian actor Maitreyi Ramakrishnan has played Devi, a drama queen who goes between boyfriends, best friends and family dramas, but this season will see her character develop into who she wants to be, not who she thinks she should be.
Thursday’s premiere comes days after the fourth and final series of the show finished filming, with Ramakrishnan saying that although she could talk about Devi, she was sad she wouldn’t ‘be’ her again. “It’s wild because I know we have this (season) of course to enjoy, more interviews to come, we have season four premiere to enjoy, but for me honestly I get to keep talking about Devi but I never get to be Devi again.”
The new season is on Netflix now.

BOX OFFICE figures were not looking promising over the weekend for both ‘Laal Singh Chaddha’ and ‘Raksha Bandhan’, two Indian films released on Thursday (August 11), but with the former now making some headway.
Aamir Khan and Kareena Kapoor Khan star in ‘Laal Singh Chaddha’ (‘LSC‘), a remake of iconic film ‘Forrest Gump’ starring Tom Hanks. Current trends of the film suggest it may not hit its targets after making Rs.10.25 Crore (£1m approx) at the weekend, making its total only Rs 37.75Cr (£4m).
Akshay Kumar’s family drama ‘Raksha Bandhan’ only made Rs 28Cr (£2.8m) over the four of the five day extended weekend, and follows the story of Lala Kedarnath (Kumar) as he tries to get his four younger sisters married. There has been controversy around a boycott of LSC -prompted by comments made by both Khans some years ago about how India’s minorities were feeling. Traditional Bollywood films have struggled in recent times as our correspondent in Mumbai has charted.

ACTOR Shubham Saraf is starring in the upcoming film adaptation of Gregory David Roberts’ bestselling book ‘Shantaram’, which tells the story of a heroin addict and convicted bank robber who flees Australia to India in the 1980s.
www.asianculturevulture.com interviewed him back in June about his role as Gandhi’s murderer Nathuram Godse in ‘The Father and the Assassin’ at the National Theatre, where he spoke about what it was like to play such a controversial character. (See link below)

Privacy & Cookies: This site uses cookies. By continuing to use this website, you agree to their use.
To find out more, including how to control cookies, see here: Cookie Policy
← Tara Arts – new head Abdul Shayek outlines vision for more diverse, inclusive, and imaginative theatre in the UK…
Bollywood asianculturevulture vibes: Stepping out, calling out, when it rains, it pours – Sushant Singh Rajput, Akshay Kumar, AR Rahman, Salman Khan… →