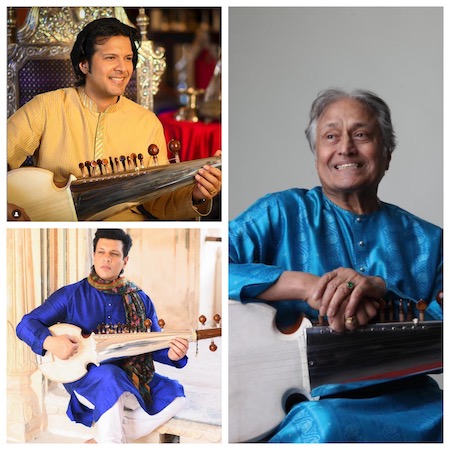 THEY are far from newcomers to the UK but their ‘family’ concert on Sunday morning (August 21) will be a bit special.

Amjad Ali Khan is widely regarded as one of the foremost sarod players of his generation – for some, the sarod player par excellence.

Their father has played all around the world in a six decade career and is seen as redoubtable ambassador for Indian classical music.

The two brothers also learnt to play the sarod with their father and now have different profiles within Indian classical music – they play duets and collaborate with other musicians as well.

While their father has played at the Proms before, it will be a first for his sons who spoke to www.asianculturevulture.com about their excitement about being part of the Proms this year and playing at a rare time of day – usually when they perform in the UK, it is in the evenings.

Amaan told acv: “My brother and I were meant to play in the UK in 2020, we were really looking forward to it, for any musician, a concert at the Royal Albert Hall (RAH) is like a pilgrimage, we feel so blessed that God gave us the opportunity, we are really excited and looking forward to it.”

Ayaan too saw the delay as something of a blessing.

“It’s quite the tease,” he joked. “We were all set for 2020 but the Almighty had other plans with a little thing called coronavirus – we feel blessed to be part of these Proms.”

Amaan explained that two brothers will open the concert with a duet and then be followed by their illustrious father. He will play solo and then the three will play together and there is also tabla and mridangam accompaniment.

Ayaan told acv: “When we finish the duet, as I often say, let’s skip to the good part… (ie their father).”

He said that all three have different personas on stage and present different sides of their personality through their music.

In 2019, just before the pandemic, Amjad Ali Khan recorded an album, ‘Strings of Peace’ with western classical guitarist, the many Grammy-award winning, Sharon Isbin – showing that stringed instruments from two very different traditions could work in harmony – it was also a metaphor and a call for people to work across traditions and cultures to combat the same foes. Amaan and Ayaan also play in the raga themed album. A raga is a traditional Indian classical musical composition.

All four played in a concert at the Aspen Music Festival in the US on August 6.

The brothers have also just released an album – ‘Sand and Foam’ with US author and musician, Kabir Seghal. The title is the same as a work by celebrated Lebanese-American writer, Khalil Gibran. The two are inspired by Gibran’s philosophy of music – which soothes and calms and aims to heal division and reduce tension.

Both projects have acquired greater meaning in a post-pandemic world and artists used to performing all over the world had to retreat to private spaces and play online for those who wanted to listen.

Amaan revealed that lockdown affected them in three different ways.

“Firstly, there was a psychological assessment – what is going on here? Who needs us? Secondly, there was financial hit, albeit we were not affected to the same extent as some others – instead of earning a 100 bucks, we earned 20. And thirdly, we all put on weight.”

The last point is obviously made partly in jest – Amaan sometimes posts pictures of himself pumping iron – keeping in physical shape isn’t always high on a classical musician’s agenda.

“I am the only weightlifting classical musician,” he chuckled. “It’s about discipline and it’s the same sort of work that goes into our music – we are trying to push ourselves into achieving things.”

The two are very clear that their father inculcated certain values that they too continue to hold dear about their art form.

“It’s not about musical fireworks,” explained Ayaan. “If we are in front of a senior musician, we have to seek their blessings – the blessing part is very important to us.”

Amaan chimed: “We were taught to absorb and observe the right attitude.”

You can be confident that the future of the sarod and its place within the traditions of Indian classical music are assured with these three practitioners – and the next generation – Ayaan’s 10-year-old twins, Zohaan and Abeer, have already played the sarod with their father.

Ayaan has a final message for anyone still wondering whether they should attend Prom 45.

“We look forward to performing for all the classical music lovers in the UK, please come to this rare morning recital with all your family and then you can all go out to lunch after.”