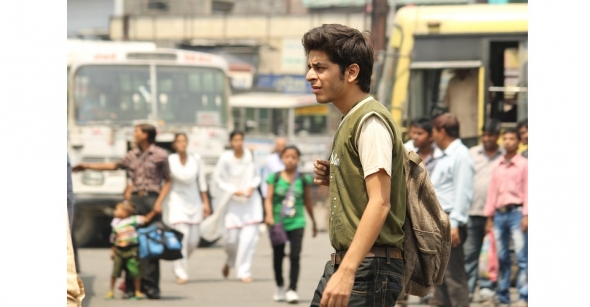 Sailesh Ram, editor of www.asianculturevulture.com, reviews the films from the Un Certain Regard section, in the order that they were seen with the most recent from the top…

“INCOMPRESA” (‘Misunderstood’) – Asia Argento is something of a name in her native Italy and beyond as a presence in front of the camera as an actor. Here she turns to directing. What to say about this? It is both charming and disturbing at the same time and you do wonder as to how autobiographical it might all be.
Aria is nine, impulsive, arty and caught between her warring parents (including a suitably mad and infuriating Charlotte Gainsbourg playing Aria’s quite deranged mother). Her dad is no better, a considerable movie star he has fallen well out of love with Aria’s mum and just wants out. Aria and her two siblings, another sister and half sister are very much caught in the middle. It is a violent household, physically and emotionally. Aria finds respite in her best friend and longs for the attentions of young boy with floppy, blond hair. There is much swearing and bad language (The Daily Mail would have a fit if this was an English film aimed at girls of that age), but this in Italian and maybe kids there are a lot tougher. Indeed, the way the boys in Aria’s class talk about the girls is both shocking and sad and they have not even reached puberty. Of course the film is childhood in extremis – everything is in this film. It has a certain charm but is unlikely to see the light of day in the UK because no one would dare to take it on and try to sell it. Or would they? Good for them…
ACV rating: 2/5

– This is immense and important and should travel around the festival circuit collecting awards. For all that though, it is a bit too long and is in some senses too parochial (paradoxically) to hit further than it really should. It is about Charlie, a decent Aboriginal getting on and trying to preserve and live out the culture of his ancestors. Modern white Australia is an unforgiving place for Charlie. He can’t hunt and live the way he wants and initially, his relationship with the police and authorities is benign and there is mutual tolerance.
During the course of the film, we see how it breaks down. Aussie director Ralf de Heer does a good job and Charlie himself gives a superb account of himself and as at point, he says, “being Aboriginal is outlawed in Australia”. It is powerful and should be a timely reminder that some white migration has had disastrous consequences for indigenous groups and that still needs to be addressed.
ACV rating: 3.25

“SNOW IN PARADISE” – The only British entry in this part of the festival has much to recommend it but we’re not going to say too much here as we want to when there is a release date for it in the UK.
It is in the British gangster genre but definitely brings something new to the form – because for the first time we get some recognition that London is multi-cultural and there are Muslims who are not terrorists…if you want to see more of these types of films (as we do), we have to support them…and there’s a real story behind the story and Martin Askew who wrote the film is in a spiritual sense, a Muslim. We’ve got an interview with him about all this and lead actor Frederic Schmidt, who wasn’t even training to be an actor when he was put up for this part. He was actually a fine art painter.
ACV rating: 3.4

“LOST RIVER” – We might start laughing. Sorry. Ryan Gosling’s first outing as a director is a mess. Perhaps a beautiful mess. But that might be overstating it – there are some great images, really arresting visuals and the characters are interesting in a kind of David Lynch way. In fact, it could all be very derivative as one person suggested. Christina Hendricks is marvellous and a little wasted. She deserves something for which her talent and beauty matter. About a dying community next to a river, there are the bones of a decent tale. But Gosling plays little heed to narrative and focuses far too much on style and mood. If it was more original visually that might be permissible but not here. But for his undoubted celebrity and sex appeal as an actor (ask a random hetero female and see the hoopla around him when he presented it here), this would sink without a hope.
ACV rating: 1

“TITLI” – Again, we have more on this and will publish at a more relevant date. Suffice to say, it’s a pretty decent film and representative of something broad and rather tragic. Politicians in India do not talk much about social mobility, but perhaps now Narendra Modi is the prime minister they might – the son of a chai wallah (tea seller) he is at the very highest table in that land. While this family of carjackers might seem a world away, Titli, the youngest in some ways represents the present generation under 30. He may be more violent and unpredictable than most (thankfully) but he finds himself a long way short of where he wants to be and it isn’t all his fault.
ACV rating: 3.5

“BIRD PEOPLE” – This is quite a strange one. For about an hour and a bit it seems fairly conventional and socially realistic as an American business executive from Silicon Valley starts to lose it on a business trip to Paris. Of course his friends and family wonder what has triggered it all. Amidst this is Audrey, a chambermaid and university student, trying to find her place in the world.
Their two paths cross somewhat supernaturally. That isn’t the problem – director Pascale Ferran invests a lot of time in Gary (played by American actor Josh Charles) and his story and she sets you up in one direction only to introduce a wholly new element in the last third. It changes tone and direction completely, if it had been better signalled, it would have been stronger.
ACV rating: 2

“BEAUTIFUL YOUTH” The two central characters are in Jaimie Rosales – Natalie and Carlos are just 20 and still act like kids. Neither have the means to move out or into a place of their own. If Europe is looking for a director who shows it just like it is – Rosales is your man. The two leads can’t find work and have little money or prospects – in the process they seek cash on the margins – in amateur porn. Rosales makes it look easy (without showing anything at all) and much later in the film Natalie makes it to Germany where she thinks her prospects are better. The closing scene has her taking her clothes off for a photo shoot. There are many stories in the media about Europe’s lost generation – youth unemployment remains high and it is good to see a filmmaker tackle this subject and for Cannes to take it on.
ACV rating: 2.5

“AMOUR FOU” – The whole tone and tenor of this film by Jessica Austrian Hausner is like a miniature painting. It charts the very strange love affair between two historical figures who agree on a suicide pact: Heinrich von Kleist and Henriette Vogel.
Kleist was a well-established poet and Vogel came from a well-to-do family with a loving husband and young daughter. She is afflicted by an illness and it is at first regarded as terminal. Kleist feels death with her is the only thing that his life merits. It’s a comedy of sorts, highlighting artistic narcissism and domestic travails. A period piece set in the 18th century, there is a richness in the composition and great technical ability. But it’s too small and precise a subject to really go beyond the sum of its parts.
ACV rating: 2.5

PARTY GIRL” – The opening film of this section – it is very French and very much about relationships as one gets older. Angelique is 60, and still likes to party as the title suggests. Her marriage to regular Alec is something of a superficial attempt to avoid larger questions about the way she has led her life, mainly in the fast lane and often indulging in sexual activity for financial gain. As a consequence, she is a mess and very flawed and her life is full of loose ends. Her children, including a daughter who she gave up for adoption and is just 16, are all pleased and support her in marriage to Alec. There are some touching scenes but for too much of the time you don’t care enough about Angelique because she’s really far too much a member of the awkward squad.
ACV rating: 2

Privacy & Cookies: This site uses cookies. By continuing to use this website, you agree to their use.
To find out more, including how to control cookies, see here: Cookie Policy
← ‘Pad Man’ (review) – Indian ‘Superhero’ film is Bollywood’s most feminist and a great watch (shame about Sonam character)
UK Asian Film Festival 2018: film stars Mahira Khan and Simi Garewal and broadcaster Anita Anand to grace fest →