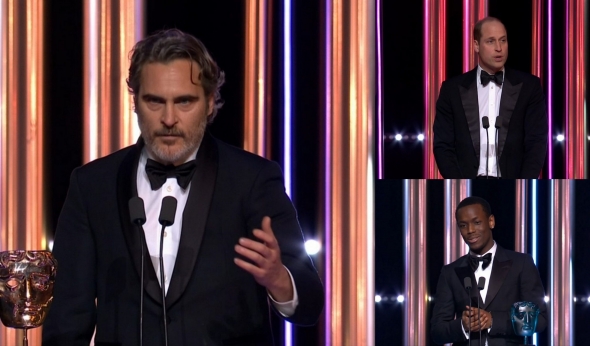 POWERFUL and impassioned calls were made last night by his Royal Highness, the Duke of Cambridge, and BAFTA best lead actor winner Joaquin Phoenix for diversity to be properly recognised by the British film industry.

HRH Prince William speaking as BAFTA (British Academy of Film and Television Arts) President, at its annual awards ceremony, at the Royal Albert Hall in London, on Sunday (February 2), castigated the body for not reflecting the depth and breath of talent – either on gender or ethnicity.

He said: ”Both here in the UK and in many other countries across the world we are lucky to have incredible film makers, actors, producers, directors and technicians – men and women from all backgrounds and ethnicities enriching our lives through film.

“Yet in 2020, and not for the first time in the last few years, we find ourselves talking again about the need to do more to ensure diversity in the sector and in the awards process – that simply cannot be right in this day and age,” said the Prince.

He made the comments in an introduction to the final award of the evening – the Bafta Fellowship given to Kathleen Kennedy who has worked with director Steven Spielberg for many years.

Phoenix, who won for his lead role in ‘The Joker’ said it was about time the system that favoured people like himself be dismantled and made inclusive and more open to people of colour.

On receiving his award, he declared: “I think that we send a very clear message to people of colour that you’re not welcome here. I think that’s the message that we’re sending to people that have contributed so much to our medium and our industry and in ways that we benefit from.”

He went onto suggest a way forward.

“I think it’s more than just having sets that are multi-cultural.

“We have to do really the hard work to truly understand systemic racism.

“I think it is the obligation of the people that have created and perpetuate and benefit from a system of oppression to be the ones that dismantle it. So that’s on us.”

He was praised by several actors and filmmakers and writers for speaking forcibly about the Diversity blunder. Many have taken to Twitter to praise him for standing up and calling out systematic racism from a position of privilege.

Among those praising him on Twitter for his stand were US stars Viola Davis, Kerry Washington, and many Brits: playwright Lolita Chakrabarti, writer Nikesh Shukla and actor Indira Varma.

Many felt Phoenix had articulated what many felt, but could not say – or did not have the platform to communicate with those who are responsible for the situation.

In the best director category – won by Sam Mendes for ‘1917’, there were no women nominees. In the either of the top acting categories no one of colour was nominated.

A furore broke out shortly after the nominations were announced on January 7. The Twitter hashtag #BaftasSoWhite trended and senior BAFTA members took to the airwaves to announce their disappointment and a review and measures to tackle the lack of diversity in the awards. It does want to increase diversity among the membership, but critics say a wider net of films and performances also need to be brought to members’ attention.

There were some bright spots for Diversity last night.

Michael Ward, the star of the film ‘Blue Story’ was the recipient of the EE Rising Star Award, voted for by members of the public.

He told people that there were opportunities and they needed to have a vision to exploit them, while recognising change was necessary.

The British-Syrian documentary ‘For Sama’ won the best documentary category. Nainita Desai composed the score for the film, which tells the suffering and plight of Sama – a girl born during the Syrian civil war in that country. In her acceptance speech, co-director Waad Al-Kateab with four-year-old Sama on stage with her, reminded the audience the war was not over.

South Korean director Bong Joon Ho’s ‘Parasite’ won both the original screenplay award and film not in the English language.

The British short animation award went to ‘Grandad Was A Romantic’. It is directed by British Iranian, Maryam Mohajer. She paid tribute to her husband, parents and daughter – who provides one of the voices for her film. She dedicated the award to the people of Iran. (See her awards speech below).

Asim Chaudhry, former Bafta winner for ‘People Just Do Nothing’ aka ‘Chabuddy G’, participated in a skit with Sam Mendes, the director of ‘2017’ mocking actor Laurence Fox who recently said he found the sight of a Sikh soldier in the film, irritating and unnecessary. Fox later apologised when he understood that more than 1.3 million, many of them Sikhs, had fought alongside the British Army in the First World War. The skit came at the beginning of the ceremony compered by chat show host Graham Norton.

Taika Waititi won a Bafta for his original screenplay to the film he also directed, ‘Jojo Rabbit’. Of New Zealander Maori and Jewish descent, his film is a jokey satire of Hitler and Nazi Germany. Acv found the film uneasy viewing and feels in Europe many would be just as uncomfortable about the production which, paints Fascism as just a bit nasty and men with bad hair.

In the laughter stakes, actor Rebel Wilson virtually brought the house down with her comment that she didn’t have the balls to win the best director award – all the nominees were men. Margot Robbie collecting the best supporting actor award for colleague Brad Pitt in the Quentin Tarantino film, ‘Once Upon a time in Hollywood’, read from notes supposedly given to her by the star. She said he was going to call the Bafta ‘Harry’ and was looking forward to it coming stateside – a clear reference to Prince William’s brother relocating to North America.

While the Baftas failed to record diversity more generally, the UK wing of Time’s Up, the campaigning organisation fighting for equality, vaunted a bunch of names as an alternate Bafta list recognising diversity and talent last Monday (January 27).

Launching a social media campaign to raise awareness of films and actors that should have been included, Heather Rabbatts, chair of Time’s Up UK, congratulated all those nominated but added critically: “This ‘invisibility’ (of people of colour) is even more shocking given the choices which were available and the strength of films and performances where Black talent was apparent.”

‘Yesterday‘ star Himesh Patel was one of those who took up the call.

All attention will now to turn the Oscars next Sunday (February 9). British Cythia Erivo has been nominated in the best actress in a leading role category. Acv interviewed her at the world premiere of the film. ‘Harriet’ at the Toronto International Film Festival.