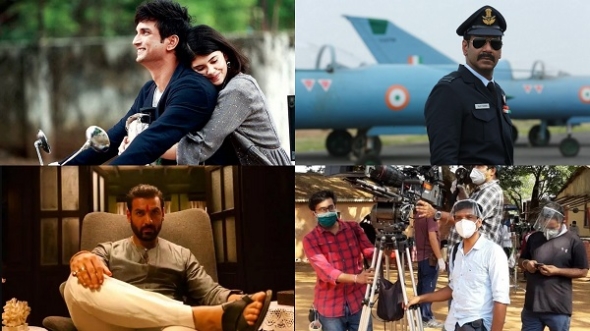 Our intrepid cinemawallah dives deep into the winds blowing through Bollywood as the nepotism debate rumbles on; and authorities give the green light for shooting – even though cinemas remain closed…

IT’S THE FOURTH month of the lockdown and biggest news to emerge out of Mumbai right now is that hair salons are going to finally open their shutters tomorrow (June 28).

Goodbye DIY hacks. But what no one is prepared to countenance – are the long queues that these salons will witness in the initial few days, which could pose a health risk to people’s lives.

While cinema halls in India remain shut, the Maharashtra (the state where Mumbai is situated) government has given permission for films, TV shows and web series makers to resume shooting in designated non-containment zones.

In these shooting areas, filmmakers have to follow very strict guidelines on the sets, which include wearing triple layer medical masks and gloves for crew, maintaining a two-meter distance, banning people above the age of 60 on set, no handshakes, hugs or sharing of cigarettes and the presence of an ambulance, doctor and nurse. Filmmakers have also to get the necessary permissions from various government agencies before they can start.

There was a lot discussion as to how practical all this is – and under representations from the Indian Film and Television Directors Association (IFTDA) and Indian Motion Pictures Producers’ Association (IMPPA), and several unions that represent those working in the industry, a compromise was reached – with issues regarding insurance cover and members’ salary also agreed, there is now a way for filming to resume.

Surprisingly though, many producers seem to be in no hurry to start shooting again anytime soon.

Director Sanjay Gupta’s (‘Kaabil’, ‘Shootout at Lokhandwala’ and ‘Zinda’) latest gangster film, ‘Mumbai Saga’, featuring John Abraham, Emraan Hashmi, Suniel Shetty and Jackie Shroff is likely to be one of the first films to start shooting in Mumbai in July.

The Bhushan Kumar production was on the verge of completion of its shoot when India went into lockdown.

The Kartik Aaryan-Kiara Advani starrer ‘Bhool Bhulaiyaa 2’, which was shooting in Lucknow around the same time, will start shooting in September.

Shah Rukh Khan’s new drama (no title yet), which is being directed by Rajkumar Hirani will go on the floors in October.

Aamir Khan’s ‘Laal Singh Chaddha’, which is an Indian adaptation of ‘Forrest Gump’, will also start shooting in October.

While much of the world has been moving out of lockdown, infections continue to rise in India (across a few regions) and some experts are predicting a peak in the pandemic in India in the Autumn or even Mid-November (in Mumbai), so these plans may still get disrupted.

Since May, when we first reported about Bollywood films going the OTT way (as they say here) or streaming, many more have followed the same route.

Vidya Balan and Sanya Malhotra’s ‘Shakuntala Devi’ has been sold to Amazon and an announcement on its date is expected shortly.

Netflix has shelled out a whopping ₹70 crore (CR), over £7 million, to acquire the rights to the Janhvi Kapoor starrer ‘Gunjan Saxena: The Kargil Girl’.

This list also includes ‘Dil Bechara’, which is available for free and will drop on July 24. The film stars Sushant Singh Rajput, whose untimely death is still making headlines for so many different reasons.

A couple of days back, the Mumbai Police released the actor’s final post mortem report, which identified the cause of death as “asphyxia due to hanging”.

The provisional post-mortem report was submitted by three doctors, but the final report was signed by five doctors.

Though no ‘foul play’ was reported to have been involved in his death, the alleged circumstances leading to Rajput’s death have opened up old wounds and thrown a murky light on how Bollywood’s powerful lobby treats upcoming actors and those who need work, as well as rampant nepotism.

It is believed that Rajput was sidelined because he was an ‘outsider’ and didn’t belong to a Bollywood family. He was born in Patna, Bihar and was studying to be an engineer before abandoning that and entering into the entertainment industry via dance initially (see http://asianculturevulture.com/portfolios/sushant-singh-rajputs-death-incites-bollywood-soul-searching/).

Legal cases have been filed against Karan Johar, Aditya Chopra, Sajid Nadiadwala, Salman Khan, Sanjay Leela Bhansali and Ekta Kapoor in Bihar, Rajput’s home state. The charge is that the star was removed from some films, while others he had made were not released. Often these cases hit the headlines but fail to materialise into actual legal cases because of a lack of evidence or are viewed as publicity stunts by judges and thrown out.

Hashtags against star kids calling them the ‘nepotism gang’ and filmmakers, who helped them gain fame in Bollywood have been trending.

Alia Bhatt, Ananya Panday, Kareena Kapoor Khan and Karan Johar have been forced to limit their comments on Instagram.

In fact, Johar has unfollowed all actors on Twitter except Akshay Kumar, Amitabh Bachchan and Shah Rukh Khan.

In one of her tweets, Sonam Kapoor accepted that she is “privileged” and has reached where she has, because of her father Anil Kapoor.

Salman Khan, who has been brutally trolled, requested his fans to stand by the fans of Rajput on Twitter.

Replying to a tweet by director Hansal Mehta (‘Aligarh’ ), in which he had called for a broadening of the ‘nepotism debate’, Alia’s mother Soni Razdan (UK play ‘When the Crows visit’ ) said that people who are “ranting” about the issue now will support their children if they want to join the film industry.

As the nepotism debate continues, sides are emerging.

Much respected Indian indie icon Manoj Bajpayee (‘Gangs of Wasseypur Part 1’) & Amazon’s ‘Family Man’) has said that the kind of talent that is wasted in India could have gone to become best actors in another country.

But the fact remains – whether anyone likes it or not – that nepotism has survived in Bollywood for decades, and the death of one actor is not going to have much effect on the way the film industry conducts its business. Sad. Brutal. But true.

Till next time, stay safe and well and keep watching online!

Privacy & Cookies: This site uses cookies. By continuing to use this website, you agree to their use.
To find out more, including how to control cookies, see here: Cookie Policy
← ‘Sukanya’ – “I feel that I have to be part of this – Raviji meant a lot to me”. Musician Pirashanna Thevarajah on return of unique opera as Shankar 100 curtain raiser hits Southbank
Deepika Padukone’s ‘Chhapaak’ makes a stand against acid attacks: the violent crime that’s closer to home than you might think →