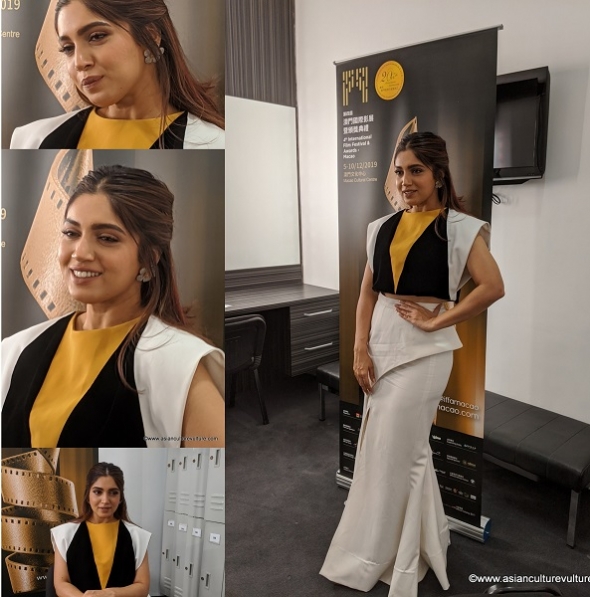 BHUMI PEDNEKAR is one of the fresh new faces coming out of Bollywood and isn’t scared of being honest and upfront – a bit like the characters she says she enjoys playing.

While she spoke more generally in the press conference (with the other Asian Stars Up Next), with www.asianculturevulture.com she was far more direct and blunt.

Chosen by trade title, Variety as one of its annual Asian Stars; Up Next cohort, Pednekar was keen to talk about how Bollywood was changing and evolving – and how actors like her can make far more daring choices these days.

One of three films of hers currently in the box office is ‘Pati Patni Aur Woh’ (roughly translated as ‘The husband, the wife and someone else’) and is a remake of a 1978 film.

In this (which we have not seen), her character ‘Vedika Tyagi’ is asked:’ What are your hobbies?’

“It’s unheard of in India – people just really shy away from the idea of a woman having desires.”

Even if a character is depicted in this way (and usually judgementally and negatively in mainstream Indian cinema), she is always the vamp – not the ordinary girl next door who has daydreams and fantasies of getting it on with some hunk (if she is heterosexually inclined, that is).

Pednekar told acv that the character’s ordinariness was one of the elements of the script that secured her involvement.

“The wife is always shown in a stereotypical way (in Bollywood),” she decried. “She is just shown as someone who has no ambitions, no real dreams – her only job in life is to service her husband.

“It was very interesting to see that that they (director-writer Mudassar Aziz and the producers) they kind of broke that stereotype in a mainstream commercial Hindi film.”

She stressed that this film’s sensibilities are entirely modern – in contrast perhaps to the original.

“You can’t look at infidelity in black or white – where somebody is in a situation where they have walked out of a relationship or a marriage and they cannot be ostracised.

“Things have changed, human relationships have evolved and that’s why I wanted to do this film.”

She also jumped at the opportunity to do some singing and dancing.

“I thought honestly, Bhumi, it’s high time you need to dance – I’ve grown up watching these films, seeing Karishma Kapoor, Kareena Kapoor, Priyanka Chopra, Madhuri Dixit, Juhi Chawla, I wanted to do it all and I had a blast and I am glad I did it.”

Many abroad may have first come across her in the international hit that is ‘Lust Stories’.

Made for Netflix India, it’s found an audience outside and if proof were needed the series was nominated for an International Emmy Award.

The series deals mostly with the taboo topic of sex in all its guises and sees a range of top Indian directors ply their hand at something without an (Indian) censor in sight.

Pednekar is indeed right to assert that an actor of her commercial standing would probably avoid any roles which were controversial in any way – but that is changing.

“Seven or eight years ago an actor who did ‘Lust Stories’ I promise you would not be doing a film with Akshay Kumar,” she declared.

Kumar is one of Bollywood’s most bankable names and has a long history in Bollywood – when you do a film alongside him, it means, you’ve reached a certain level.

It came relatively early to Pednekar, starring as Kumar’s love interest and significant other in ‘Toilet: Ek Prem Katha’ (crudely translated as ‘Toilet: A love story’).

Pednekar proved a major hit – and it was not hard to see why on the evidence of her interview in London with Kumar as they publicised it for the first time in the UK and not India.

She said she is very discerning when it comes to scripts: “In my own way, I try to find characters that make these subtle social comments – where I am concerned and as much as I can, I am going to try and do films that are true to my moral compass.”

When was the last time you heard a Bollywood star say that?

She has recently commented on the protests in India around the controversial Citizens’ Amendment Act (CAA) – coming out in favour of those exerting their opposition peacefully.

Currently, she has three films in theatres: ‘Saand Ki Aank’ playing one of two 60-year-old village women (the other is played by Taapse Pannu) who take up air pistol shooting and make it competitively (and based on real shooters Chandro Tomar and sister-in-law, Prakashi Tomar) ; ‘Bala’ where in her own words, she plays someone “who is very deep-coloured” alongside the man very much of the moment, Ayushmann Khurranna, who is going bald but battles the condition with a toupee; and ‘Pati Patni Aur Wor’.

Coming up for her is a role in the star-studded, ‘Takht’ which is helmed by Indian super celebrity director in his own right and talk show host, Karan Johar and ‘Durgavati’ – produced by Kumar and described by Pednekar as a “horror thriller” and “which is her first female solo led film, not supported by a male star”.

Variety’s Asian Stars Up Next has become a regular feature of the International Film Festival and Awards Macao (IFFAM) and the group are given awards and participate the Closing Ceremony (December 10). Last year Zaira Wasim was chosen and spoke to acv about her award and a lot about the making of ‘The Sky is Pink.’

In our exclusive little piece to camera, Pednekar talks of her acting ambitions and has a message for all her fans…