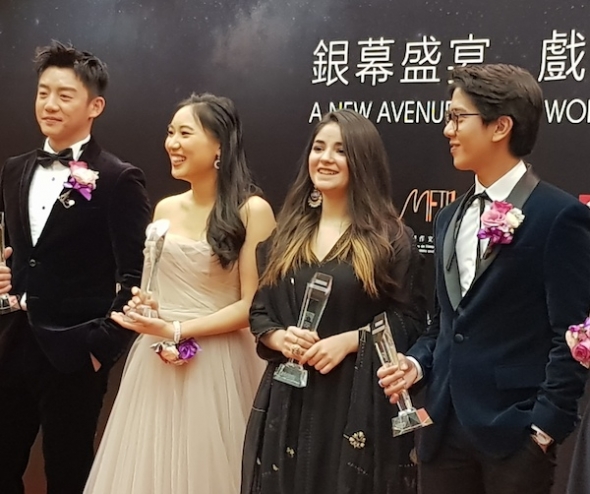 On the sidelines of her appearance here as trade mag, Variety’s Young Stars of Asia panel and awards, she told acv that every film remains a challenge for her.

She shot to fame in ‘Dangal’ and further cemented her reputation in ‘Secret Superstar’. Both were massive hits at home in India, and abroad, and most noticeably in China itself too.

Now, she will appear in ‘The Sky is Pink’ alongside Bollywood/Hollywood icon Priyanka Chopra and Farhan Akhtar, and both play her on-screen parents.

Talking about  the character who is ill for much of her young life but still lives fully and without compromise, Wasim said: “I would say that every film for me is challenging.

She said the responsibility to her character was the same as it was for both ‘Dangal‘ and ‘Secret Superstar‘  where she was the co-lead and lead, respectively –  but she accepted there was an added poignancy to her latest role.

“The pressure is always there, irrespective of the fact that whoever you are working with – and specially with the film that I am doing right now (‘The Sky is Pink’) it is based on a person who is unfortunately no longer with us.”

She told acv that she loved working with Priyanka Chopra but was keen to stress she was learning from everyone about her craft on the set of ‘The Sky is Pink’.

“She (Priyanka Chopra) is the coolest person I would say. She’s amazing, the person who she is, and how she deals with everything,” said Wasim, who is just 18.

“I really learnt a lot from her and not just from her, but from everyone on set from the director (Shonali Bose) to the producer (Siddharth Ray Kapur), my co-actors and anyone else –  you learn so many different things.”

She said she did not want to single out any actors as those she looked up to and wanted to emulate.

She has a following in China because both ‘Dangal‘ and ‘Secret Superstar‘  have been great successes here, and while she has never visited Macao, she has been to China once before and walked a red carpet.

“‘Dangal‘ was huge and so was ‘Secret Superstar’  here, and I think the credit goes to Mr Aamir Khan for that. He has led the way and opened the doors for Indian films in China,” she told acv.

She also added to www.asianculturevulture.com that she was delighted to be at IFFAM and was looking forward to this evening and the closing ceremony of the festival.

She has just posed for photographs along with the other  Variety Young Rising Asian Stars – Chinese star Zheng Kai said: “Let’s make movies together.”

Earlier Wasim told us: “I am really honoured and so excited and nervous at the same time. It’s amazing to meet these young artists who are doing so great.”

This is the second year at IFFAM that Variety have chosen a group of young stars to participate in IFFAM and receive awards.

The other stars this year are Anne Curtis from The Philippines who stars in the hard-hitting drug war feature ‘Buybust’ which screened here at the festival; Iqbaal Ramadhan from Indonesia, is just 18, and is already an established star in his home country, acting and singing. He has yet to go to college and will attend Monash University, Melbourne next year; Xana Tang is from New Zealand and is set to star in a big blockbuster Disney movie, ‘Mulan’, set to be released in 2020.

Zheng Kai  combines a prolific acting career in films and TV with singing as well. His film ‘Shadow’  was tonight’s closing film. We hope to have more on Kai when we look at the new Chinese cinema strand here in more depth.

The festival has just ended with the awards and the closing film – more on that tomorrow (UK time).

Privacy & Cookies: This site uses cookies. By continuing to use this website, you agree to their use.
To find out more, including how to control cookies, see here: Cookie Policy
← Manchester International Festival 2021: Imtiaz Dharker on ‘Poet Slash Artist’ and her new artwork/poem ‘My Breath’ (video)
Manchester International Festival 2021 (July 1-18): Rashid Rana, Imtiaz Dharker, Zoe Iqbal, Abi Sampa, Akram Khan & Naaman Azhari: artists stepping up and back onto a platform…(preview) →