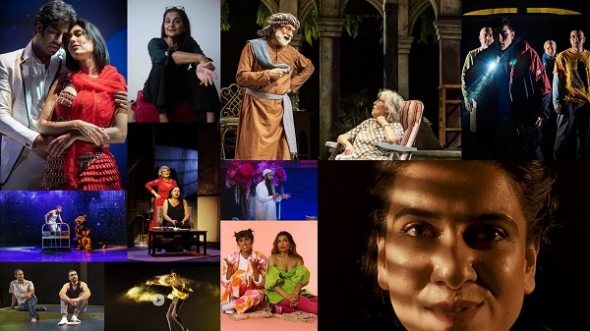 What’s happening … a couple of reviews and listings from today and through to November ….

SHARP, funny, poignant – Waleed Akhtar’s double-hander is entertaining, energetic, a giggle, and also very moving by the end.
Billy, played by Akhtar himself, is a bit of a jack the lad character, and definitely up for it on Grindr – the gay dating app.
In this monologue section, we learn about Billy – his wants, ambitions and outlook on life. He avoids his Muslim family, believing they will come round. He does want to settle down and find a good man, but he is too busy having a good time and tells us straight up that a man from his own or similar background is a no-no (his phrase is ‘he doesn’t do p**kis).
Enter Zafar (Esh Alladi) seeking refugee status in Britain after being almost beaten to pulp in his native Pakistan when his family discover he is in love with another man. The two aren’t destined to meet but do…
This is a romantic comedy of sorts but the last third is far from predictable and Akhtar’s talent is to show us loads but through the prism of real, believable, relatable drama. Now in its last few performances – see! Super *****

Refugee story like no other?
The Boy with Two Hearts

TWO AFGHAN boys flee from the grip of the Taliban and dream of moving to America to become Hollywood stars or footballers with Manchester United. Three brothers in all, Mum and Dad take an arduous journey through Russia, Europe and arrive in Cardiff. One of the brothers is sick, seriously so and time has been another unrelenting enemy – adapted from the best-selling book with the same title by Hamid Amiri, and assisted in this production’s writing by brother Hassam, this is a refugee story unlike any other we know.

YASMIN WILDE’S play would make for a fine TV drama. The writer-actor is the lead in this and plays Sonia. Middle-aged, mixed race, divorced and generally a little set in her ways, she’s dealing with the passing of her white mother – who had a career as a Shirley Bassey tribute act.
Her mum Gloria (Janice Conolly) haunts Sonia’s every move.
One of Sonia’s children continues to live in the parental home – sixth former Jade (Nikhita Lesler).
We travel back in time to when Gloria met the man of her dreams… A handsome, dashing Pakistani airline pilot.
With appropriate music, and with a little kitsch, this is a well-rounded story with lots of interesting cultural inflections and insights. Director Pravesh Kumar and the team deserve plaudits. Will travel we hope, certainly deserves to… *****

The shady one is back!
Tartuffe

TALENTED Asif Khan returns to reprise his role as the dodgy priest in the Royal Shakespeare Company (RSC) production of Anil Gupta and Richard Pinto’s re-working of the great Moliere classic, with a Muslim British family at the centre of the drama.
A seemingly kind and pious priest befriends a Brummie family – and then exploits their generosity and vulnerability, ruthlessly. First performed in 2018. A lot of fun – we reviewed… http://asianculturevulture.com/portfolios/tartuffe-rsc-production-has-laughs-and-serious-point-to-make-review/

Sparkling – not the wine. but a lot else…
Evening Conversations

ACCEPT Sudha Bhuchar’s invitation to crack open a cold one, or settle down with a warm glass of red (or milk if you prefer) and discuss the dissonance she sometimes feels with her two teenage British-born sons who tell her she’s the one with the ID crisis, having been born in Africa, then growing up more in both Punjab, India and Britain and then marrying a Muslim heritage Pakistani.
A much admired and pioneering theatremaker, as one of the co-founders of the long-running Tamasha theatre company, this solo show is like her – warm, intelligent, engaging, thoughtful and dare we say it, extraordinarily relevant in the age of Rishi Sunak entering No10 and our much maligned, but rarely celebrated in this multi-hypenated cultural and ethnic world we all inhabit. See it – and not just because of Sunak! Haha.

Get your dancing shoes on!
Bombay Superstar

SAMIR BHAMRA is back at it! The man behind ‘Bring on the Bollywood’ (‘Bob’) returns with a new musical show – ‘Bombay Superstar’. His company Phizzical and Belgrade Theatre are almost guaranteed to put on a great show – with yesteryear hits and a rising talent cast, some of whom broke through in ‘BoB’, this might be one of the best ways to beat those cost of living blues and support a genre – diversity in musicals – which is not as well served as it might be in the UK.* Laila (Nihaa Aaliya) is just breaking through when she meets the slick and rather more worldly, Sikander (Rav Moore)…is this a match made in heaven or just one in the moment?

Spy who lived and died a war heroine
Noor

ONE of the best known and most inspirational figures from the world of espionage in the Second World War gets a long overdue stage treatment.
Noon Inayat Khan crossed enemy lines as a spy and fed British intelligence in occupied France until she was captured and tortured – even then, she did not buckle under Nazi pressure. Awarded the George Cross (the highest military award) –posthumously, she should be celebrated more. Writer Azma Dar, director Poonam Brah, actor Annice Boparai, and all at Kali Theatre, which produces this, have started…

Bedroom affairs: taboo-busting, identity and confidence
Brown Girls Do It Too: Mama Told Me Not To Come

ADAPTED by Soho Theatre and produced by Tilted from the award-winning BBC Asian Network radio show and podcast comes the stage version with Poppy Jay and Rubina Pabani presenting a lively, no hold bars chat, sketches, sing and dance show about their intimate encounters and more. Described as “fierce, funny and wonderfully frank”, it is currently on tour…

Listing – Brown Girls Do IT Too: Mama Told Me Not To Come by Rubina Pabani and Poppy Jay (from BBC Sounds show)
Various dates and venues – see https://www.tiltedco.com/browngirlsdoittoo

REMEMBER the 1982 film ‘Disco Dancer’ with Mithun Chakraborty? Even if you don’t, you have probably heard the classic tracks from this film directed by B.Subhash with music from the late and immortal Bappi Lahiri. Produced by India’s oldest music label, Saregema, this is a world premiere with seven performances. Directed and choreographed by Rajeev Goswami and written by a host of established names, comedian Sania Mirza introduces.

CONTINUING to do the rounds and packing them in, is the stage version of the films and the original novel by Deborah Moggach. It is currently on a nationwide tour before a run in the West End next year. With Hayley Mills, Paul Nicholas (who featured in the BBC documentary), Rula Lenska and Rekha John-Cheriyan, Shila Iqbal, Karena Jagpal, Harmage Singh Kalirai, Nishad More and Anant Varman among the cast and directed by Lucy Bailey.

Listings – The Best Exotic Marigold Hotel by Deborah Moggach on tour till 2023 and then to transfer to West End
Various dates and venues – https://marigoldshow.com/

THIS smash hit theatre version of the book, and film with the same name, has already been laden with many awards and will make its way onto Broadway in the spring of the new year.
The show continues here at its original venue until January 15. There have been cast changes since September (it opened at the end of last year) with Nuwan Hugh Perera, taking over the role of Pi from Hiran Abeysekara and Ameet Chana replacing Nicholas Khan as the father.
In this a 17-year-old Pi (Perera) is shipwrecked and forced to share a boat with a speaking tiger. Adapted by Lolita Chakrabarti for the stage from the 2001 Booker Prize winning novel with the same title by Canadian Yann Martel. News & review : http://asianculturevulture.com/?s=life+of+pi

*Seen our video with Irvine Iqbal talking about the range of musical theatre talent in the UK as he stars in ‘Come Fall in Love – The DDLJ Musical’ in San Diego, California