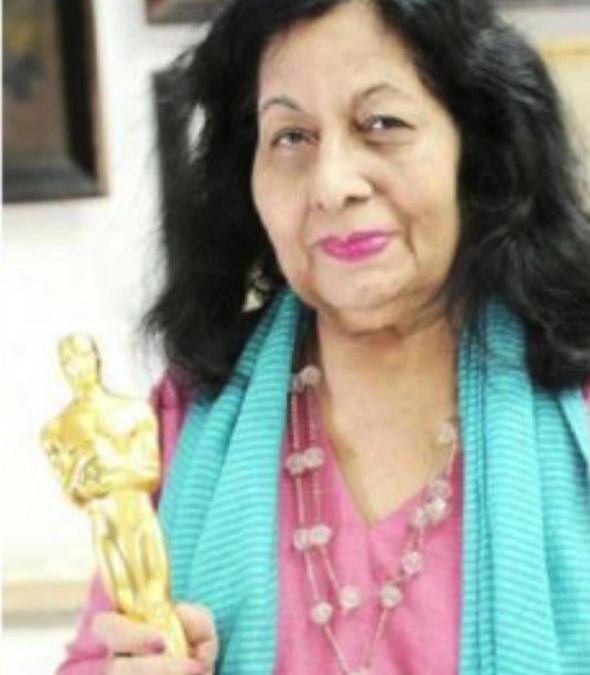 One of India’s foremost designers, Bhanu Athaiya (April 28 1929 – October 15 2020) is remembered by people who admired her creativity in design and here www.asianculturevulture.com recalls her career and contribution to cinema….

www.asianculturevulture.com has separate tributes presented by actors, Meeta Vasisht & Alaknanda Samarth for whom Athaiya had done costumes for their films and plays. Please see below.

In this, we look at her career in Indian cinema and the impact of her costumes on fashion trends and shaping style for decades from ‘Gandhi’ to ‘Lagaan’, Athaiya dressed them all.

BEGINNING in the 1950s to working in cinema for over 50 years, Athaiya created costumes for many heroines ranging from Waheeda Rahman in ‘Pyaasa’ (1957), to Sadhana in ‘Waqt’ (1965), to Mumtaz in ‘Brahmachari’ (1968) to Sridevi in ‘Chandani’ (1989) to Rachel Shelley in ‘Lagaan’ (2001), clothing them all in a distinctive look which set up fashion trends to be emulated by the Indian woman.

Rachel Dwyer, Professor Emerita of Indian Cultures and Cinema, SOAS University of London, told acv: “Bhanu styled a look that was right for the characters and the star, giving them a believable glamour with a keen eye to fashion and style in India and the West, as in the film ‘Waqt’ when the actress, Sadhana created a new look with her churidars (tight pyjamas) and mojris (Indian shoes). Or for the film, ‘Chandni’ which has the chiffon and pearl look, the borderless sari in strong colours, such as yellow for the song, ‘Mitwa’ in the film.”

Costumes reveal a lot about attitudes in India society, be it modern, traditional or experimental said Dwyer. The role of fashion is key as the stars’ styles are copied – whether its hair such as the Sadhana fringe or her clothes.

For example, Mumtaz in ‘Brahmachari’ wore a draped orange sari for the song ‘Aaj Kal Tere Mere Pyaar’ with added outer pleats and a zip to one side to make it easier for her to dance to and create a tightly wrapped silhouette which were perfect to show off her curves. This modern pre-pleated sari look took off in subsequent decades as it was easier to wear and move around in.

Athaiya was born and brought up in Kolhapur in British India in 1929, one of seven children of the painter, Annasaheb and his wife,Shantabhai Rajopadhye.

She studied at the Sir JJ School of Art, Bombay and later worked as a fashion illustrator for magazines. She was asked to design dresses, discovered she had a talent and went to work in film.

Athaiya worked in over 100 films in Indian cinema but she was propelled to world attention when the film, ‘Gandhi’ (1982) directed by Sir Richard Attenborough and featuring Ben Kingsley in the titular role, was nominated for 11 Oscars.

It went on to win Best Costume Design at the Oscars in 1983 where it was shortlisted alongside four other films, ‘La Traviata’, ‘Sophie’s Choice’, ‘Tron’ and ‘Victor/Victoria’.

Athaiya, who was 54 at the time, won the statuette with her co-designer (John Mollo) and was dressed in a blue sari – which her daughter, Radhika Gupta told www.asianculturevulture.com was “her creation done by the ‘karigars’ (artisans) in her workshop” — for the ceremony, held at the Dorothy Chandler Pavilion, Los Angeles and hosted by one-time British comedian and TV star Dudley Moore.

It was a big moment for India and as she is walking up to the podium you can hear the orchestra playing the Mahatma’s favourite bhajan, ‘Ragu Pati Raghav Raja Ram’ you can watch it all here. (See link below).

“It’s too good to believe, thank you Academy and thank you Sir Richard Attenborough for focussing world attention on India,” she told the audience. Overall the film won eight Oscars including Best Actor, Best Director and Best Picture.

Speaking in an interview in 2009 with the Hindustan Times, Athaiya revealed the enormity of the job.

“It was difficult because we had to show 50 years of the Mahatma’s life in various locations, including Dandi (where the Salt March took place).

“In South Africa, Gandhi was young and he changed over the years; it was difficult to capture the look. There were other sequences too – where hundreds of people in period costumes had to be used.

“You can well imagine the kind of study I undertook to create the look I had to do the job single-handedly. I had to compete with an international crew and the challenge was to match their standards. But I managed to create the look of the times.” (See the link below).

Later, in 2012, she returned her Oscar statuette and donated some of her ‘Gandhi’ papers including call sheets, schedules and other production materials to the Academy of Motion Pictures Arts and Sciences where they are stored for future research and use.

The ‘Gandhi’ film made her the first Indian and only Indian woman ever to win the coveted statuette, and she continued to work regularly in Indian cinema until 2015 with the Marathi thriller, ‘Nagrik’ – considered to be her last film.

The period drama, ‘Lagaan’ told the story about a group of villagers who agree to a cricket challenge by an oppressive British tax collector and also brought a brush with Oscars again as the film was shortlisted for the Best International Feature Film category.

Actor Rachel Shelley who played an English girl, ‘Elizabeth Russell’ who falls in love with ‘Bhuvan Latha’ (the young village hero, played by Aamir Khan), told acv how she enjoyed talking to Athaiya about the film and appreciated her work ethic.

“I first met her when she came to London months before shooting began to source the British costumes, and I took to her immediately.

“Her reputation and Oscar for ‘Gandhi’ preceded her of course, but her quiet attention to detail and beauty was remarkable right from the start. She took me to the paragons of English corsetieres Rigby and Peller in Knightsbridge, where I was fitted for an authentic Victorian corset.

“This became the foundation for my character Elizabeth, informing my posture, my deportment, my very demeanour. She worked her magic, finding traditional materials and forging stunning creations, crafted specifically to shape and enhance my body within Elizabeth’s character.

“I had never been a part of such a huge production, and I was stunned by the process. I remember how every time she would unwrap a glorious new gown for me to try on, it would feel like chocolate treats at Christmas. ‘Lagaan’ is sumptuous and textured and beautiful. She was integral to all of that. I could never thank her enough.”

Athaiya wrote her memoir, ‘The Art of Costume Design’ published in 2010 and was invited by UK Asian Film Festival (UKAFF) to undertake a costume workshop in 2011 where she was presented with a Lifetime Achievement award for her work as a costume designer.

“Her designs have had a great impact on fashion trends, from Sadhana’s sleeveless churidar kurthas to that unforgettable pleated Mumtaz sari, Bhanu Ji will always be fondly remembered as an iconic trend setter”.

“We had a great rapport and she was keen to collaborate on a project with me. I travelled up to India to workshop the project with her and during the course of our interaction, she completely changed the way I should be thinking.

“She opened my eyes on how I should see colour, cuts, and the type, weight and flow of fabrics. She was my education and her advice and approach to design has influenced all the work I made from 2014 onwards.”

There is no doubt her legacy as a doyenne who shaped and styled Indian heroines for decades is assured.

Actors remember her part II below

Privacy & Cookies: This site uses cookies. By continuing to use this website, you agree to their use.
To find out more, including how to control cookies, see here: Cookie Policy
← ‘Beecham House’ – series finale ends with blood and romance – and we must have more!
‘Venice Preserved’ – Gotham City makeover of 17th century play sizzles in director Prasanna Puwanarajah’s RSC production… →