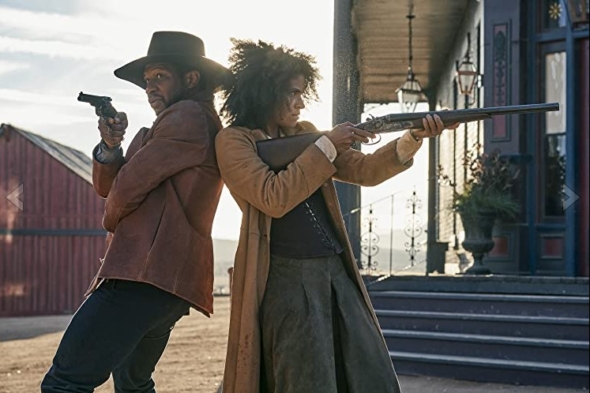 Made by a black Londoner, this film, which had its world premiere this evening (Ocotber 6) is going to blow many away… (no spoilers)

First time director Jeymes Samuel has produced a film of such quality and style it is hard to fathom that he is doing this for the very first time.

Ably assisted by an all-star cast and led imperiously by Jonathan Majors as Nat Love and romantic interest Stagecoach Mary (Zazie Beetz), ‘The Harder they Fall’ re-writes this genre of cowboy flick in a rich and intelligent black idiom.

The music is brilliant, the acting of an extremely high order – with Regina King, Idris Elba, Lakeith Stanfield, Delroy Lindo, all also essaying major roles and some of the set piece-scenes are worth watching again and again.

Finally, this is a black history as it was in 19th century America. As the film so powerfully points out: These people existed – even if the story is fiction.

This is essentially a story about two sets of black cowboy outlaws – they write their own rules and live and die by the gun. There is a high body count and it’s hard to pick the good guys out from the bad guys but that is Samuel’s design in many ways.

He keeps you guessing and wondering and you are never quite sure where and how this will all end. But you know it will – and the final quarter is like that exhilarating stretch of a roller-coaster ride, you really don’t know whether you want to get off, but you know you will have to… even though a part of you just wants the ride to go on.

The opening scene is rather pivotal, watch closely – it’s not for the squeamish and Elba’s brooding presence as Rufus Black disappears for a short time.

Jeymes, who co-wrote with Boaz Yakin, has beautiful character portraits – each of the gang members has a personality and a story and the writing of the two major women characters – Mary and Treacherous Trudy (King) is also replete with meaning and power.

There is a lot to this film, if you want to look underneath its shiny, lovingly assembled surface – but even if you just watch this film on its own terms as a piece of entertainment and a piece of art that is like a beautiful painting, that will be enough.

It’s great to see a genre that many of us don’t like for its absence of colour come out with all guns blazing.

Samuel is a serious talent and it is almost too much to expect him to continue in this scintillating vein, because this film has very few missteps.

Perhaps the story gets a tad lost because these characters have so much going on between them – both visibly and not so visibly.

It really doesn’t matter – sit back and enjoy!

Some tickets were available for Sunday’s screening earlier. It is also showing in other parts of the country where they have LFF films and it drops on Netflix on November 3. No excuses. (Sailesh Ram).