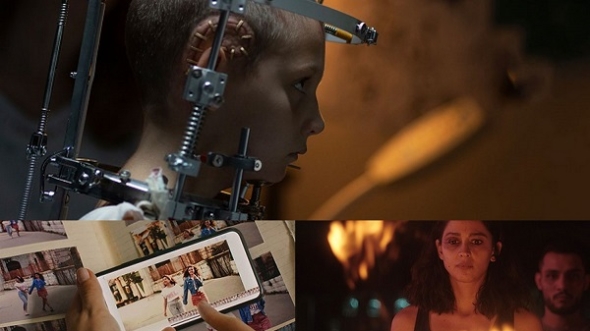 WHEN this film had its world premiere in Cannes earlier this year, it caused quite the stir – mostly for its violence.
It is gratuitous and comical in places, and that shouldn’t detract from what is a powerful and challenging examination of modern society. It certainly isn’t for everyone.
You simply shouldn’t take this film as a slice of social realism – it isn’t and its slightly absurd storyline is surely enough indication of that.
It won the Palme d’Or at Cannes for a reason and acv can see why – this is unbridled filmmaking – courageous, bold, incendiary and provocative. Director Julia Ducournau lets her imagination go where most of us would just stop. It has an unrelenting grip and that is what you want – there are no flabby bits in this. Well. It is a film a lot about the body and how we perceive it.
The lead played – with incredible presence – is Agathe Rousselle. She is Alexia and then Adrien. Essentially, she is on the run having murdered several people; she changes her gender identity and manages to be ‘adopted’ by a gay fireman chief. Those are the bare bones of this tale – the flesh is what makes it and even a week later you’ll be thinking about it. It all starts with a car accident and the little Alice getting a titanium plate in her head. Ducournau has announced herself and shows she is an uncompromising auteur. Bravo! (SR)
Acv rating: **** (out of five)

An AUDIO and visual treat from beginning to end, ‘Memory Box’ beautifully captures the nostalgia of youth in the 1980s where pre-social media, hand-written notes and audiocassettes provided an outlet for teenage angst.
Alex (Paloma Vauthier) discovers her mum’s past by secretly reading letters and diaries she kept over this decade set against the backdrop of war-torn Lebanon. The story flips back and forth-between these memories and present-day Canada where they live, and it’s accompanied by a lively 1980s soundtrack.
The shifting dynamics of the mother-daughter relationship between Alex and Maia (Rim Turki) are core to the film, but it’s the reminiscing of teenage dreams that makes this an appealing watch. Warm, creative and relevant, it challenges our perception of memory and why confronting the most delicate moments of our past may turn out to be our favourite if we have the courage to confront them. (MBH)
ACV rating: **** ½

Thriller with heart and soul

A CLOSE-KNIT community in Amman, Jordan begins to unravel at the seams as the darkest secrets of its residents are leaked by a mysterious blackmailer who threatens to share their misdemeanors. Meanwhile, two young lovers embark on an unknown adventure, while the local gangster boss faces his own demons.
A thriller with heart and soul, ‘The Alleys’ is a captivating tale of city life where opposites attract: fear is juxtaposed with humour and selfishness is balanced with love. Monzer Reyahnah shines as Abbas, the likeable and comical goon who rules the neighbourhood, while local boy Ali (Emad Azmi) steps into the role of his nemesis.
Ghandour’s depiction of the alleyways of Amman is packed with surprises and generous twists. Look out for the barber; there’s more to him than meets the eye and his contribution to the plot is life-affirming.
ACV rating: ****

More reviews will appear on www.asianculturevulture.com as the festival commences October 6-17