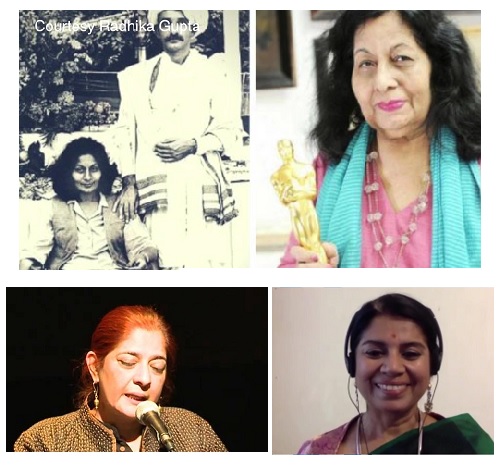 Two actors pay special tribute to Bhanu Athalya – to read our obituary report, Part I, see here
Actor and friend Alaknanda Samarth remembers her and below Meeta Vasisht talks about her experiences of working with the costume designer…

“Bhanu was my friend. I first met her in 1987. I was told she would be doing the costumes for my solo double bill, ‘Kunti’ and ‘The Human Voice‘ by G Sankara Pillai and Jean Cocteau in Bombay.

Kumar Shahani, the director, introduced us. Bhanu would glide in and sit discreetly in a far corner of the rehearsal room, sketchpad in hand, head lowered, as I rehearsed eight hours a day.
Four hours in the morning on ‘Kunti‘ in Hindi – from ‘The Mahabharata’. Four hours after lunch on ‘The Human Voice‘ in English, a Parisian woman desperately in love.

The complicated choreography was by Chandralekha, the producer was Veenapani Chawla, the set was by Akbar Padamsee. I never saw the sketches. But I wore the exquisitely appropriate two costumes, with the fluidity, freedom, shape and emotional texture they gave the two characters from two different cultural worlds I was performing.

Bhanu’s understanding of fabric and lighting gave them a contrasting luminosity, a lightness. She also dressed the set (I still have the delicate, oyster coloured, crocheted bedspread she used in ‘The Human Voice’). India Today described the show as ‘a landmark in Indian Theatre’.

During the performances Bhanu was always on hand. We did shows in Delhi which I literally wouldn’t have got through without her.

It was about Wilfrid Bion, the renowned psychoanalyst and his early years in India. I appear in several avatars, as the River Jumna, a Maharani, the Ayah and more. Such complex period costumes in various palettes on a shoe-string budget. The filming was in India.

In dire circumstances. The film remains unfinished. The funds ran out. Bhanu was like a rock. And the research, imagination, daring in her work was a huge protection for the international actors. Looking at the edited rushes today, you marvel at her costumes and with such stringent means. She delivered the goods, as always. Whatever was going on around her, Bhanu remained composed and observant.

We were good friends. One of the first stops when I landed in India was her garage workrooms. We would catch up on everything. She was avid to know about the exhibitions in Paris, London or Rome.

I was avid for her anecdotes about the heroines she’d dressed in 60 years. The devil is in the detail and she was a storehouse of the most piquant details!

She was meticulous about detail, getting the painstaking research perfect, in the perfect place, in perfect time for that ‘shot’ or ‘take’, freeing the actor. We would talk, have cups of tea, go out for meal, talk some more. I admired her, marvelled at her tenacity as a woman working in a male dominated industry where technicians were not respected as artists.

She was the guardian angel of actors. And will continue to protect them. Thank you, Bhanu. May you rest in peace. With love, Alak.”

Below actor Meeta Vasisht talks to Suman Bhuchar about meeting Bhanu Athaiya and what a profound impact she had on her and wider cinema and theatre in India.