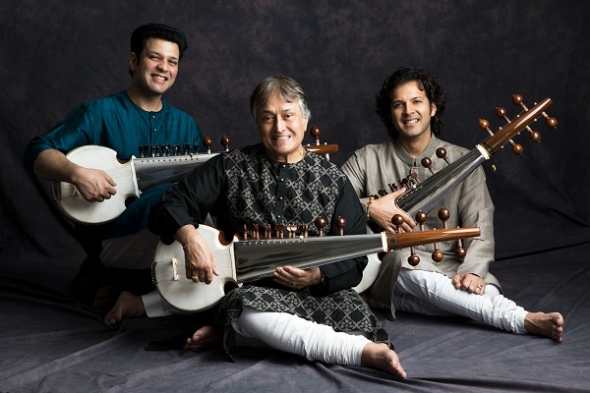 HE IS REGARDED as one of the sarod’s greatest exponents and for the first time in six years, Amjad Ali Khan will perform a concert alongside his sons, Amaan Ali Bangash and Ayaan Ali Bangash in Britain.

The sons, accomplished sarod players in their own right, and often a performing duo, can be seen with their father at the Royal Festival Hall at the Southbank Centre in London on Tuesday (April 30).

It is billed simply as a concert of traditional Hindustani classical music but don’t expect the blandly predictable.

“I am really looking forward to playing at the Southbank,” *Ustad Amjad Ali Khan told www.asianculturevulture.com from New York, where the three were touring earlier this month. “I love the audiences there, very cosmopolitan and people from all over the world, and I had a great experience with my last concert there.

“Now, this is very exciting, going there with my sons, we last played together six years ago at the Wigmore Hall in London – that is a lot smaller.”

Ayaan told acv he had great memories of London and his father performing for His Royal Highness Prince Charles.

“We’ve had some very momentous performances – at Kensington Palace and High Grove, he (HRH Charles) loves my father’s music, it’s a really great honour to be back.”

While the evening is a concert of classical Hindustani music, Ayaan explained there is a degree of freedom and latitude about these things at Indian classical concerts.

“Everything is really tailored to the evening and the occasion. We still have some preconceived compositions in mind but a lot of the eventual ethos of the concert will depend on the vibe of the audience,” he explained.

“Hindustani classical music is the language of vibrations, we don’t have a written score, so everything we are doing is happening right there and so audience participation is important.”

He said that he expected him and his brother to play first, and then his father perform a solo, before the final section, involving them all.

Both Ayaan and Amaan are also playing together and performing at two festivals in May in the UK and will be joined by violinist Jennifer Pike in their Soul Strings concerts.

“This has a written score, Jennifer comes out of her comfort zone and we come out of ours,” narrated Ayaan.

The sarod pair have been collaborating with other musicians from different musical traditions, but their father Ustad Amjad Ali Khan has until more recently remained rooted to the world of very traditional Indian classical music.

However, his sarod concerto has seen him collaborate with orchestras more. This is sarod with backing from a full-scale orchestra.

In June, he will perform ‘Samaagam’ (loosely translated as important gathering) with the China National Symphony Orchestra.

“I am performing this all over the world and the shows have been sold out.

“ I am looking forward to bringing it to London and playing with London Philharmonic Orchestra,” Ustad Amjad Ali Khan told acv.

For Ayaan, this represents a new chapter in his father’s musical journey.

“He’s more busy than ever, I think he’s doing some of the most interesting projects of his life.

“My father for the longest time stuck to the traditional and he wanted to approach the world of collaboration with his own judgement, now it’s taken on a beautiful momentum and so many orchestras around the world want to work with him.”

Amaan told acv he preferred collaborating with western musicians to Indian ones.

“There’s a big level of hypocrisy,” he said explaining how some wanted to collaborate but not for sound musical reasons. “What I find with western musicians and others is that they are humble, easy-going and either they want to work with you or they don’t.”

Expect to hear more then about the Sarod Concerto Ustad Amjad Ali Khan has composed; and possibly other collaborations between the brothers, along the lines of Soul Strings.

*Ustad is a title of veneration used in South Asian classical music.

Privacy & Cookies: This site uses cookies. By continuing to use this website, you agree to their use.
To find out more, including how to control cookies, see here: Cookie Policy
← Venice Film Festival 2019 – ‘Chola’ (‘Shadow of water’) violently tackles India gender issues
London Film Festival 2019: Dev Patel, Bollywood stars and Indian Indies and Bangladesh doc all set for capital glitz →