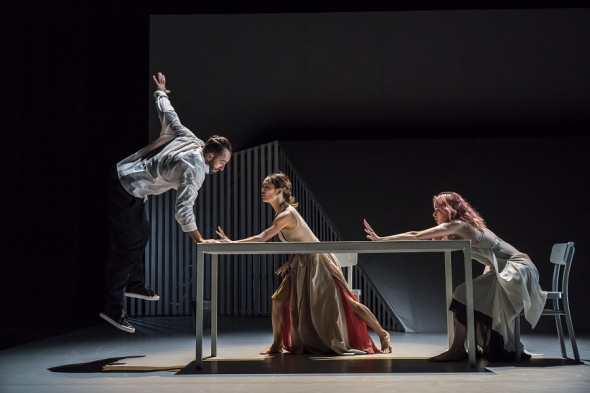 If there was ever a perfect album to turn into a soundtrack for a live choreography, it’s this and the man himself tells us it’s a bit special even for him…

IF THE TRAILER clip on the Sadler’s Wells website is anything to go by, then next week we’re all in for an evening of mesmerising pleasure, as Nitin Sawhney’s ‘Dystopian Dream’ turns from album into a live theatrical performance, featuring music and dance.

The multi-award-winning composer has been an Associate Artist at Sadler’s Wells since 2010 and since then has scored a number of productions, including Akram Khan’s ‘Zero Degrees’ and that’s alongside sound tracking a plethora of film, television and live performances plus of course making his own albums. Does the man ever sleep?

We can’t confirm – but we did manage to catch up with him on his lunch break, while prepping for one of the most poignant works of his life to date: transforming his 2015 album ‘Dystopian Dream’, into a live stage show.

He told ACV: “The album was inspired by my father passing away in 2013, exploring themes of loss and isolation. Turning it into a production was something I’d been chatting to Sadler’s Wells about for a while. I’d never heard of a full album being turned into a dance but I saw it as a way to ‘remix’ the album giving it a cinematic appeal.”

A musical pioneer for three decades, Sawhney’s unique skills and abilities to capture human emotion whist storytelling defines his poetic sound and while purely as an audio feast, his 2015 album ‘Dystopian Dream’ is a delight to listen to, when accompanied by visuals and live choreography devised by Honji Wang and Sebastien Ramirez, the music takes on a whole new level.

Sawhney said: “When I compose I think visually, especially as I create so many soundtracks. For this, we looked at the themes and lyrics as a starting point and we’ve created a beautiful, elegant, poetic show unlike anything anyone has ever seen before. Although my father’s death was the inspiration the show is not about him, but the universal topics that the audience can interpret for themselves.’

As an album ‘Dystopian Dream’ has a dark, fairytale essence embedded throughout it. Soft, fluid female vocals are set against atmospheric rhythms inspired by the topics of loss and isolation.

Powerful and emotive, it effortlessly flows into the movements of the dance which features aerial work, costumes by celebrated Fashion Designer Hussein Chalayan and is accompanied by live vocals.

There are three performers in the show, one of which is Eva Stone, a long time collaborator of Sawhney’s, who sings the haunting ‘Dystopian Dream’ soundtrack, live as part of the dance.

Could a more magical production be created?

We think not. There’s just two evenings to catch this epic show, so snap up your tickets while you can, it will sell out.