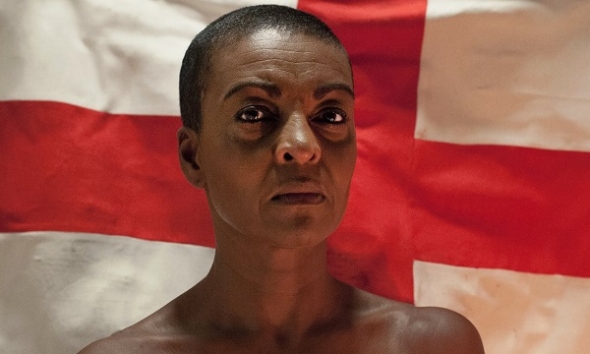 All-women of colour production has made impact…. (review)

IT HAS UNQUESTIONABLY been one of the hits of theatre in 2019.

Adjoa Andoh and Lynette Linton’s ‘Richard II’ has been an absolute revelation.

Using a totally female cast and one that has no white presence in a play that is about England and who controls it, is a move of genius.

Its winter run ends tomorrow at (April 21) at Shakespeare’s Globe on the South Bank in London, but we sincerely hope it will resurface somewhere, anywhere…

Notwithstanding, the headlines from earlier this month, when Shobna Gulati (Duke of York) was injured after a structure hit her and from which she is recovering, the praise for this production has been universal.

Andoh and Linton (artistic director of The Bush in London), both co-directors, present a work full of surprises and powerful just for being so different.

Andoh also reprises the lead part with enormous gusto and energy – her Richard II is full of slights and wounds, more emotional than anything and his unpredictability and possible (and perhaps justified) paranoia are displayed with the brooding menace, Shakespeare surely intended. It is truly magnificent.

Many have remarked that this production took place during the fraught hours of our possible departure from the European Union (yes, March 29 has come and gone). Alas, that has been postponed but its state of the nation resonances were not lost on anyone.

Having a black woman play one of the most notorious characters of Shakespeare’s canon is a grand statement in itself and one the bard would approve.

At bottom, this is a play about power and how some are inclined to lose it, despite having lots of natural advantages.

Shakespeare was dealing with a nearer history in that Richard II reigned from 1377 to 1399 – choosing to write about him in 1595 or thereabouts and focusing on the last two years of his life – Richard II died in 1400.

Essentially, Richard comes out badly – and Andoh gives full expression to that sense of a destiny thwarted.

His allegiances are never that clear and his arrogance and highhandedness repel even his most loyal supporters.

It isn’t the easiest play to follow – (having not seen a more conventional production) and the fact that there are no gender distinctions to be made – mostly the female cast appear to be playing male characters – make it harder still, but that is to miss a very crucial element.

The performance in the Sam Wanamaker Playhouse (in contrast to the actual Globe theatre next door) is intimate and lit mostly by candlelight – the atmosphere is terrific and you feel like you are in the tail end of the 14th century.

Rather than follow the plot intricacies, it was better to let the play touch you in a way that might be more similar to the way you approach a painting.

Rational discourse cannot explain everything and so it is with this play.

What you come away with is a powerful idea that individuals can shape a country’s history, more than we perhaps appreciate.

You suspect Shakespeare had little real sympathy for Richard, and cast him as the bad guy, and a King who used his powers recklessly and selfishly and scarred England for years to come. Perhaps in more tender moments, we see a different Richard, shorn of the pretence of power, he is gentle and vulnerable but these are fleeting and obscured by a greater energy to maintain control and affect the obedience of dissonant aristocracy.

To come to more contemporary considerations, in light of this play being about England, (Scotland was not yet part of any union, and some of Richard’s troubles stemmed from wanting to colonise Ireland), would Shakespeare be a Remainer or a Leaver?

It’s an intriguing question and one of the greatest Englishmen that ever lived, as always, provides no easy answers, but poses a serious of pertinent and powerful questions.

Though this is sold out, the Globe has a series of Shakespeare’s history plays through this Spring and into Autumn – ‘Henry IV Part I’, ‘Henry IV Part 2’. (See below for more)

Privacy & Cookies: This site uses cookies. By continuing to use this website, you agree to their use.
To find out more, including how to control cookies, see here: Cookie Policy
← Got the festival frenzy? ‘Retracing our footsteps’, ‘ZEE JLF at the British Library’ and London Indian Film Festival attract star contributions and ready to spark stirring debates…
‘How To Be Human – Life Lessons by Buddy Hirani’ – book is hit among film glitterati and comes to the UK now… →