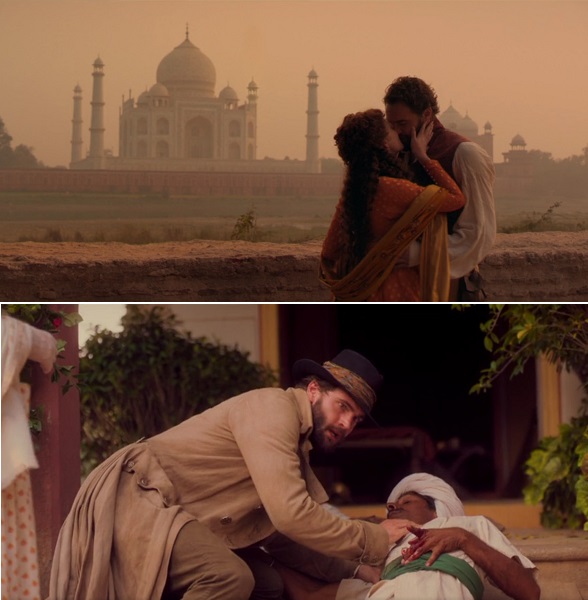 But it’s Miss Osbourne (Dakota Blue Richards) who once again tries to save John by visiting Begum Samru (Lara Datta) and pleading with her to save John’s life as he continues to cover for Prince Akbar (and the ‘illicit’ sale of the Star of Agra).

Baadal (Viveik Kalra) tries in vain to keep a fully recovered Chanchal safe in his home. However, Daniel follows him and brings her back to Beecham House as Augustya (John Beecham’s son) needs looking after since Chandrika left due to the danger surrounding the house.

However, the real surprise is Beecham’s mother (Lesley Nicol), who begins to involve herself in Indian (or to use her word, ‘native’) traditions despite her displaying her outward disgust in previous episodes.

She even sits in on the servants’ prayers for John’s safe return, sides with Chanchal on Daniel’s thoughtless behaviour and pleads with her to stay in Beecham house after she expressed her desire to go home.

Looks like all it took was for her son’s imprisonment for Mother Beecham to finally start integrating herself with Indian customs – took her long enough!

Maharajah Kalyan (Denzil Smith) and Chandrika swiftly return to visit the Emperor (Roshan Seth) and plead for John’s life. A shrewd Margaret quickly reacts by telling Chandrika of Prince Akbar giving the diamond to John to sell in order to build an army to protect them.

After Maharajah Kalyan reveals this to the Emperor, John is freed and finally confronts Samuel on his betrayal. In an attempt to save himself, Samuel stabs General Castillon and points a gun at John.

Somehow John saves himself (although we’re not sure how) and he returns home much to everyone’s delight; Castillon survives the attack and is shown to be recouperating with Begum Samru providing some intimate assistance in this regard.

A happy reunion for John with his mother, son and finally a (juicy) kiss with Miss Osbourne nice wraps up the the final episode of the series…or does it?

Shortly after John whisks Miss Osbourne to the Taj Mahal to propose to her, the pair return to many bloodied, dead servants at the house and a missing Augustya…who has taken him?

Now we must have a second series!

Postscript: No decision has been made on a second series but Gurinder Chadha, series creator and director has said she has three series already mapped out.

Episodes 1-6 can be seen (UK) for a limited time period https://www.itv.com/hub/beecham-house/2a5715#episode-list-s1