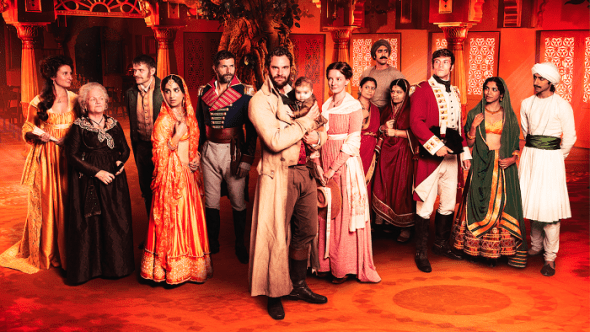 THEY are calling it Downton in Delhi and in some respects, the tabloids are right.

Director Gurinder Chadha’s new six-part TV series for ITV, ‘Beecham House’ and which begins this evening at 9pm, is a sort of tribute to Sunday evening television and some of the great TV that has already gone before it.

Chadha, whom we spoke to about ‘Beecham House’, having watched the first two episodes at an ITV press launch earlier this year, openly acknowledged this.

But what is most impressive – and striking to anyone who knows about these things – is the period she has chosen to locate ‘Beecham House’.

This is pre-Raj India, the Indians (as in the Mughals) are still very much in charge.

The Englishman at the centre of the drama – ‘John Beecham’ (Tom Bateman) is an immigrant and trying to make his way in the world as an ethnic minority. He most certainly is not about pillage and plunder. He speaks Hindustani and is integrated into Indian culture.

If that wasn’t all, the French are already there too in the form of General Castillion (Grégory Fitoussi). They are inside the Mughal court and there is a fair amount of manoeuvring.

“I wanted to make a drama about an Englishman who was good at a time when most were not,” Chadha told acv. “And that is the point and very relevant today.”

And something that touched the cast too – Viveik Kalra plays faithful head of household, ‘Baadal’.

He told acv: “This is a glimpse of a purer India – the Britons and the French are still visitors and the Indians still rule, it is quite special.”

For Australian born and raised Pallavi Sharda, who plays Rajput Princess ‘Chandrika’, the rewriting of the narrative feels both powerful and right.

She told acv: “This is not a deviation from reality, it is nodding to a (different) reality and talking about Indian history and humanising and showing it as it has never been portrayed (in the West) – and how sumptuous it was at the time, as opposed to being about an underdog country that was colonised – which is the story that we have all absorbed as were growing up.”

Sharda spent a few years in Bollywood, and enjoyed success there after some tough times in the beginning. She has featured in films alongside Bollywood stars Ranbir Kapoor, Ayushmann Khurrana and most recently with Vidya Balan in ‘Begum Jaan’.

She said her experience of India and filming there helped and significantly, she is the only Indian in the upper part of Beecham House (reserved for the English).

“It was really great working on a British drama in India, I knew half the crew there and it was symbolic coming together of my own identities.

Chadha and co-writer Paul Mayeda Berges (Chadha’s husband) and historical scriptwriter and consultant Shahrukh Husain have constructed a story which in some ways is a companion piece and near two century prequel to her own feature film, ‘Viceroy’s House’ (2016).

“The starting point (in ‘Beecham House’ ) is that people know nothing and then as it progresses, some people will recognise it goes here and here,” explained Chadha.

In other words, this is a retelling and repositioning of a very familiar narrative and in some ways, attempts to redress the balance on the subject of Colonialism and Empire.

In recent times, a revisionist narrative has become popular, especially among parts of the respectable Right in British politics.

Empire was ok, really – yes, there were some atrocities and problems, but British rule was mostly benign and beneficial for the countries it captured, goes this viewpoint crudely.

‘Beecham House’ shows the complexities and difficulties such a view poses – and it does so, through an Englishman – which is a significant departure from most historical fiction – TV or otherwise.

At some point in the series a character will say: “We will see if his (Beecham’s) heart beats for Hindustan.”

The series will be a test of sorts – Chadha hopes ITV will commission a second and third series – she is definitely up for it, as the popular expression goes.

But beyond viewing figures and critical reaction (every newspaper has it down as the pick of the day today, she told an audience at the London Indian Film Festival, Chai with Chadha talk, last night – June 22), this could be a defining moment for British television – as Chadha has said in different contexts, our story made by us but for everyone…

Chadha told acv at the ITV press launch: “I want audiences to be entertained on a Sunday night by a compelling drama that is telling them about a world and a part of history that they thought they knew, but they don’t – and so that influences the way they look at history as a whole.”

Join us this evening as we live tweet @asianculturevul