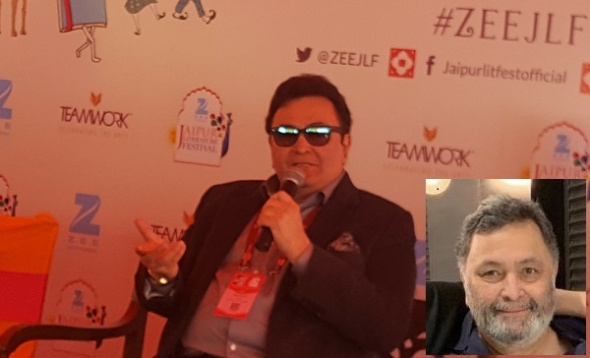 RISHI KAPOOR, one of the great icons of Indian cinema for more than 50 years, passed away from cancer earlier today.

The great romantic lead, who hails from the first family of Indian cinema had been suffering from leukaemia, according to Indian media reports.

He had undergone treatment in New York in the Autumn of 2018, but was not explicit about his illness at the time, preferring to tell his vast legion of fans and admirers, that they should not worry and he returned to India saying he was in fine fettle.

He had just a few months earlier been seen in ‘102 Not Out’ with another legend of Indian cinema, Amitabh Bachchan. Improbably, Bachchan played father to Kapoor the son.

India’s Prime Minister Narendra Modi was among those, this morning, who paid tribute to the star, whose grandfather Prithviraj is widely recognised as one of the founders of the modern Indian film industry in Mumbai (or Bombay, as it was then).

His father, Raj, also has a very special place in the Indian film industry as an actor, director-writer and producer. The Kapoor family remain one of the most important in Bollywood – Rishi’s son, Ranbir, is one of a modern generation of actors who are gaining a similarly large following.

Rishi Kapoor’s first part was as a young actor in his father’s epic ‘Mera Naam Joker’ (1970), his breakthrough role came in ‘Bobby’ (1973) as a rebellious teenager determined to marry outside his community.

Later films included the socially powerful, ‘Mulk’ (2018) in which he played a Muslim patriarch fighting his family’s good name as it becomes embroiled in accusations of supporting terrorism and he almost came to London in 2018 for the London Film Festival premiere of ‘Rajma Chawal’.

About love across the generational divide in India, it showcased the actor’s considerable talents. As it was, the star went to New York to have treatment and disappointed his many UK fans.

He was active on social media (Twitter) and often used his platform to share key social messages with the Indian public and his international followers.

The whole of the Indian film industry, and indeed, much of the country, will be in mourning today.

He is survived by his wife Neetu Singh, son Ranbir and daughter Riddhima Kapoor Sahni.

Note: about the main picture – pictured by acv at the Jaipur Literature Festival 2017 (more on this later).

Privacy & Cookies: This site uses cookies. By continuing to use this website, you agree to their use.
To find out more, including how to control cookies, see here: Cookie Policy
← (Now Closed) ‘Tiger Zinda Hai’ Christmas competition – Win! Enter now, read on…
My role in ‘Arth 2 – the Destination’ – BBC journalist Attika Choudhary tells us about her debut feature film appearance… →