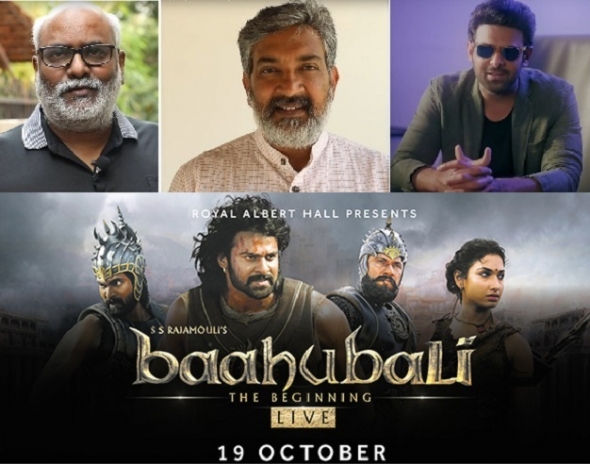 We are just a fortnight away from a what is likely to be an unrivalled cinematic experience in London…ready?

www.asianculturevulture.com is delighted to announce the winners of our Baahubali competition.

Chandrika Patel of Croydon, London and Mala Patel of Thornton Heath, Surrey, are the names that emerged out of the winners’ draw. Thanks to all who submitted an answer – especially those of you who entered before September 23. Bad luck!

Everyone in the prize draw, answered the question, who is the music composer of ‘Baahubali’, correctly – MM Keeravaani.

The Indian mythological epic film – which broke many box office records and endeared itself to many across the globe – comes to the Royal Albert Hall for a screening with a live musical accompaniment by the Royal Philharmonic Concert Orchestra on Saturday, October 19.

In addition, six of the film’s undoubted talents will be at the Royal Albert Hall for a special pre-screening Q&A.

Prabhas – as he is known by all now (also referred to by his fans, as ‘Darling Prabhas’) – is the star of ‘Baahubali-The Beginning’ and he makes a rare appearance outside India. He will be joined at the Royal Albert Hall by co-stars Anushka Shetty and his arch rival in the film, Rana Daggubati.

Auteur director SS Rajamouli will also be present for the Q&A, as will famed music composer, MM Keeravaani.

‘Baahubali – The Beginning’ – the first instalment was released in 2015 to great acclaim and even greater public adulation. A South Indian film with no recognised nationwide stars it went onto break box office records both at home and abroad and set a template for Indian films which mix computer generated imagery, and amazing set design and music with strong acting, an accessible plot and clearly defined characters.

The second instalment released in 2017 and referred to as ‘Baahubali – The Conclusion’ went onto emulate and further enhance the reputation of all involved. It remains one of the biggest grossing Indian films of all time and is regularly cited as one of the most expensive ever made too.

Today, its star are feted around the world and SS Rajamouli is regarded as one of India’s great directors. MM Keeravaani has had lots of hits, both in South India and in Bollywood, but ‘Baahubali’ represents something a crowning achievement for the musical maestro.

And music composer MM Keeravaani is looking forward to the experience…

Click on the banner to find out about tickets. The cheapest at £14.67, are still available at the time of going to press (today)

When Rajamouli, Anushka Shetty and MM Keeravaani came to London for a screening at the BFI Southbank, acv was there and got to talk to them…