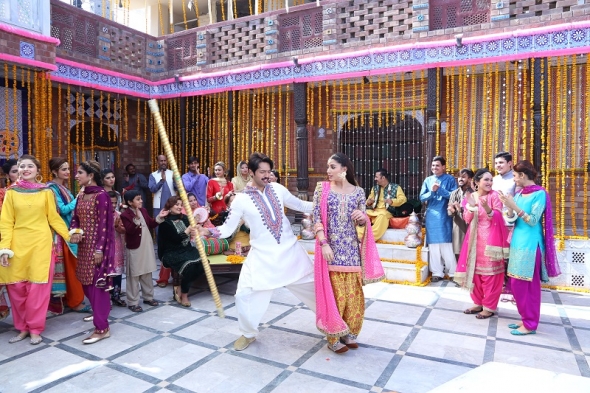 From the makers of two successful previous productions…

DIRECTOR Nabeel Qureshi has crafted a Punjabi comedy about love, responsibilities with a dollop of social issues thrown on top.

Raja (Fahad Mustafa), lives in a small town called Nirali in Punjab, Pakistan and since he was a child he’s been in love with Meeru (Mehwish Hayat) but it’s one sided as he’s never expressed it to her.

But after his father died, he’s had to shoulder more responsibility and can only get married after his sister, Baby Baji (Faiza Hasan) has found a match and is settled.

All this is narrated to the audience as the film opens by Raja’s friend and sidekick and the humour is quite coarse. In the opening scene – Raja has to light up an electric heart for a wedding event but can’t do it as the bride is his beloved!

Baby Baji and her mother, (Samina Ahmad) excel in their over the top performances of domineering Punjabi females, resorting to screaming, hysteria, beating their breasts, and indulging in emotional blackmail to get their way.

Events take a turn and before you know it Raja and Meeru are wed (no spoiler alert here), and what happens next is quite unexpected.

The director depicts life in a small town dominated by television shows and prizes, and suddenly a quiz show is looking for local participants and Meeru gets a chance to compete in a game show and wins the glittering prizes which she graciously offers as a dowry to enable Baby Baji to find a suitable suitor. To say any more about the plot would really be a spoiler….

I really enjoyed the songs from this film (which are also mostly in Punjabi) and sung by different artists. ‘Faqeera’ (Shani Haider) ‘Rangeya’ (Mulazim Hussain, Missal Zaidi), and ‘Good Luck’ (Shani Arshad).

The film is a bit silly but has a good heart. If you follow Punjabi, you can get the nuance of the rustic humour and hear the language roll on the tongue – this bought laughter to the audience I was watching the film with and that is its charm.

Verdict: Tongue in cheek comedy with a social message

On release now in the UK…

Privacy & Cookies: This site uses cookies. By continuing to use this website, you agree to their use.
To find out more, including how to control cookies, see here: Cookie Policy
← Cannes 2020: Reflections…more about this film…
ACV Lockdown Listings – BBC Eid food special with Adil Ray; Meera Syal in new ‘Unprecedented’ digital dramas; Bollywood singer Shankar Mahadevan support for UK arts group and more… →