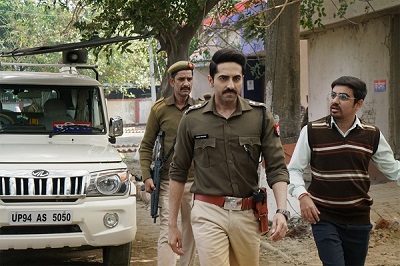 World premiere of the film at the London Indian Film Festival last night – echoes of ‘Padman’ and ‘Toilet Ek Prem Katha’ in its social appeal, but perhaps more pointedly than both of those…

HARD-HITTING might be an overused word but in Anubhav Sinha’s film ‘Article 15’, it is entirely appropriate.

When we spoke to him (see here), director Sinha spoke of his anger about caste discrimination and boy, does it show in this.

He tackles the subject head on and the way he does so is quietly brilliant.

Quietly, because his lead protagonist – Inspector ‘Ayan’ – Ayushmann Khurrana in very powerful performance – carries the movie and our sympathies with him every step of the way.

Ayan is the son of a diplomat and has spent a lot of time outside India (he’s very comfortable in English and Hindi), and he is at heart a patriotic and loyal Indian – and crucially, trying to do the right thing.

Posted to a rural outpost in Uttar Pradesh, he quickly finds out there is a very precise order to life in these parts – everyone knows their place and there is a very strict but unspoken hierarchy.

When two ‘low caste’ girls are found hanged – Ayan feels compelled to investigate, but some of his subordinates are less than keen to do so.

It is an ‘honour killing’ – closed and shut case, they say. The girls had become close and were involved in a relationship. Their fathers took huge offence and murdered them to save face and their sense of honour.

You can see clearly the battle lines have been drawn – the low caste or Dalits, as they are called, are victimised and discriminated against – they do the worst jobs and get no thanks or appreciation. One of the sub-inspectors treats the stray dogs better than these human beings. It is one of many subtle but telling vignettes in this film.

With a powerful score to match, ‘Article 15’ does not flag, and while the final section gets a little complex in who did what exactly, the broad outline is clear enough.

Gritty, realistic, and uncompromising, acv can’t help thinking this film has the shadows of two other films behind it.

‘Court’ (2014/2016 UK) is a marvellously entertaining, humorous but pointed exploration of class and caste and centred around an absurd court case around a Dalit sewerage worker in Mumbai – it too, like ‘Article 15’, asks why should people who go into Indian sewers and not have any protection…as with the toilet campaign and movies such ‘Toilet: Ek Prem Katha’ or ‘Padman’, a social movement should come out of this film.

‘Jai Bhim Comrade’ (2013/JBC) is a magisterial work and director Anand Patwardhan’s lastest film, ‘Reason’, has its UK premiere on Saturday at the festival. JBC is a longer, deeper and more politically engaged documentary.

But the point of these films is the same – every human deserves to be treated with dignity and respect and the Indian Constitution drawn up as by Dr BR Ambedkar (low caste himself) recognised this and it is contained in Article 15 of the Indian statute.

Sinha asks the law is there, but where is the justice? Go see it and ask the same question.
ACV rating: **** ½ (out of five)