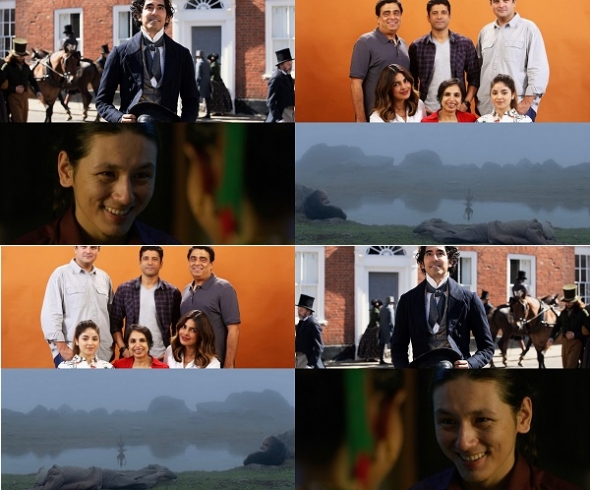 Dev Patel, Priyanka Chopra and Farhan Akhtar amongst the stars who feature in the line up at the 63rd BFI London Film Festival #LFF

AUTUMN doesn’t properly feel like it has started until the BFI London Film Festival gets underway and this year you’ve got from October 2-13, to catch some of the best global contemporary cinema.

In its 63rd edition, the festival line-up has 229 feature films from 78 countries including India and Bangladesh. And where India is concerned, there’s independent films, an animation and a major Bollywood starrer. Intrigued? All will be revealed…

…but first, let’s talk about the opening night gala. British Asian actor Dev Patel takes the lead in a fresh take on the tale of Charles Dickens’ classic, David Copperfield (as pictured above top left and top right) .

‘The Personal History of David Copperfield‘ has an all-star cast including Tilda Swinton, Peter Capaldi and Ben Whishaw. It’s not a re-make for modern times, this is a classic period drama and with Dev at the helm, we’re keen to see how the dynamics of having an Asian lead in a quintessentially ‘English gentleman’ style role plays out. It could well be a career defining moment for the Slumdog Millionaire star.

‘The Sky is Pink‘ which premiere’s at the Toronto International Film Festival (TIFF) in Canada on September 13th, screens at LFF too and is set to attract Bollywood fans eager to see Priyanka Chopra (Jonas) back on the big screen in Indian film. The movie also stars Farhan Akhtar who has recently spent more time on making music than acting, another reason fans will be flocking to catch this flick by Shonali Bose.

Another film that premiered internationally and is making it’s way to LFF is animation ‘Bombay Rose’, which first showed at the Venice Film Festival (earlier this week, see here).

Meanwhile if you’re after some traditional entertainment, ‘Axone‘ has been described as the Indian ‘My Big Fat Greek‘ wedding, or for something darker try ‘Jallikkatu‘, a South Indian thriller.

Also on the slate is ‘The Gold-Laden Sheep & the Sacred Mountain‘ by debutant director Ridham Janve. Set in the Himalayas, it’s about time in another dimension in an unforgiving environment. A shepherd and his assistant go in search of riches in the form of a fallen jet but just what is is that they seek?

One to look out for in the documentary strand is Rubika Shah’s ‘White Riot’ focussing on a rock against racism concert in the 1970s.

Finally it’s not often Bangladesh features in the LFF programme, but this year there’s ‘Made In Bangladesh‘, a story set in a garment factory.

We suggest you cancel all other plans for October as it’s likely you’ll be spending most of your time at the cinema.

For the full programme and LFF listings for the above films, go to: https://whatson.bfi.org.uk/lff/Online/default.asp