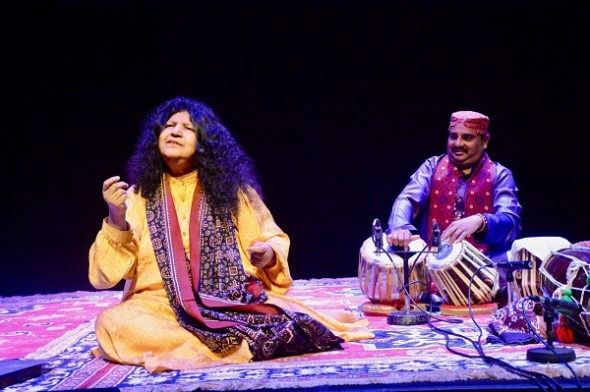 Labels disintegrate in the power of a remarkable performer…

SHE entered the Barbican hall like the Sufi music star she is – but left like a rock star whose fans simply can’t get enough of her.

Abida Parveen was a sensation last night – it was hard not to be utterly mesmerised by her beguiling set. Accompanied by three other musicians, Karam Hussain on dholak, Abid Hussain on tabla and Manzoor Hussain on harmonium, her two-hour performance left the full house in raptures.

She is the finest exponent of Qawwali and Kafis anywhere in the world – taking this devotional form of singing to new heights and almost certainly, new worlds.

Her voice is both a delicate and destructive instrument – delicate because it can sound as mellifluous as the sound of a fountain on a scorching day. It can also be destructive in a truly positive sense – loud, booming and dominant, it transcends division, artifice and all and any selfishness.

Her voice transmits an uplifting sense of brotherhood, and a belief in the unity of mankind and the beauty of togetherness and the passion and strength of human endeavour devoted to the divine or righteous causes – these Sufi beliefs inform her lyrics and vocal style and go to the very heart of her wide appeal and an ever-growing fan base.

You do not need to understand a word to appreciate the beauty of her voice and the power it communicates – its energy and exquisite range connect to a part of you that you did not know exists.

There were voices from the audience in between – requesting she sing that song and some collectively, break into chants of “Ali, Ali”, a reference to Hazrat Ali, the son-in-law of the Prophet and a much revered figure, especially for Shia Islam. Some simply uttered “Wah, Wah ”, a term of praise that can be heard at events throughout South Asia.

Your appreciation of the music and the lyrics will no doubt be greatly enhanced if you know the languages and the religious philosophy that underpins her artistic practice, but truly it isn’t necessary, you can simply listen on your own terms.

She sings in a mixture of languages, and also mixes verses and poetry from one tongue to another – among her repertoire, you can hear Urdu, Sindhi (her mother tongue), Saraiki (also spelt Seraiki) Punjabi, and Farsi (the language of the early Mughal court).

None of these are known to this writer, but her voice and energy are more powerful than anything that can be rendered here on the page. She simply melts difference and co-opts the human heart to another project altogether.

Go see and listen to her if you ever get the chance – there are many videos on Youtube and they are just a taster – for to be in her presence and within the (considerable) range of singing voice is like a moon finding its planet.
ACV rating: ***** (out of five)

Privacy & Cookies: This site uses cookies. By continuing to use this website, you agree to their use.
To find out more, including how to control cookies, see here: Cookie Policy
← ‘Around the World in 80 days’ – Pushpinder Chani on elephants, 18 characters (all his), and family laughs…
BFI India and British Asian films old and new online – treasure trove of retro films and early works of star filmmakers… →