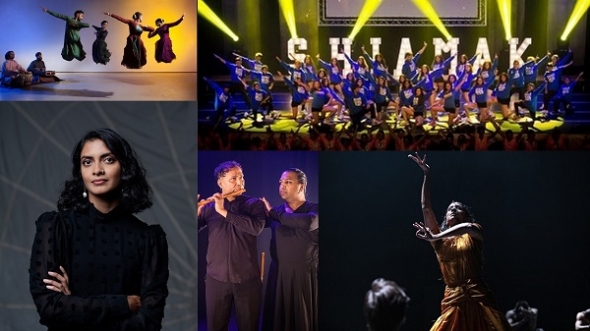 THOSE of you interested in Indian dance and choreography, both classical and contemporary should look out for the following – Jaivant Patel’s appearance at the dance-theatre festival, Shout; ‘Shiamak: Winter Funk’, Pagrav Dance Company ‘Kattam Kati’, Vidya Patel’s choreography piece as one of Sadler’s Wells Young Associates, and Akram Khan’s latest piece ‘Outwitting the Devil’.

Bharatanatyam dancer Seeta Patel can be seen in a powerful re-imagining of the iconic ballet, ‘The Rite of Spring’ by Igor Stravinsky. Patel’s ‘Rite of Spring’ takes us on a journey of discovery and hope – upending classical notions and boundaries and ushering us into a more meaningful exchange between East and West. It is on a short tour that starts on Wednesday (November 10). See below for listings.

‘Shiamak: Winter Funk’ premiering in Harrow, London on November 13 and then a week later in Warwick. It is a high energy Bollywood dance show which has been put together by dancer Aakash Odedra and the man who gave him his first professional break as a dancer, Shiamak Davar. Odedra celebrates 10 years of his company, Aakash Odedra Company (AOC), this year. More on this and what’s coming up for him beyond Winter Funk soon…

Pagrav Dance Company debut in the smaller space at Sadler’s Wells – the Lillian Baylis Studio on November 18-19. Rooted in the festival of Uttarayan, the world famous kite festival held annually in Gujarat, and called, ‘Kattam Katti’, it marks the end of winter and the beginning of Spring. The dance is presented by four Kathak dancers of British Asian heritage as the company marks its debut at Sadler’s Wells.

Vidya Patel’s new piece will also premiere at the Lilian Baylis Studio as part of the Mixed Bill presented by the dance theatre’s own Young Associates programme on November 23-24. Patel is one of three other upcoming dancers presenting their own choreographed work for the first time at Sadler’s Wells – seen as the home of British dance. The other dancers are Olive Hardy, John-William Watson and Magnus Westwell. Patel has spoken to www.asianculturevulture.com about this – look out for that interview soon.

Khan’s ‘Outwitting the Devil’ is a UK premiere from Tuesday, November 23-November 27. Khan will also be reprising ‘Xenos’ his epic First World War drama depicting an Indian solider fighting in the trenches of Europe. It runs from November 30-December 4. And there is ‘Chotto Xenos’ for children aged 7 and above as Khan introduces the next generation to those who fought and died for Britain through dance. Theatre director Sue Buckmaster has adapted Khan’s full-length piece.

Kundi, who was one of the lead dancers in Khan’s recent ballet collaboration piece, ‘Creature’ , will be helping to shape the English National Ballet’s (ENB) Ballet Futures: The Pipeline Project – which was announced yesterday (November 8) and looks to introduce children aged between 8-12 to high quality professionally led ballet instruction. The project is pivoted towards getting children from more diverse backgrounds into ballet and is a nationwide initiative – and the ENB will be proactive in reaching out to parents from the African diaspora, Caribbean, South Asian and South East Asian heritages.More on this soon.