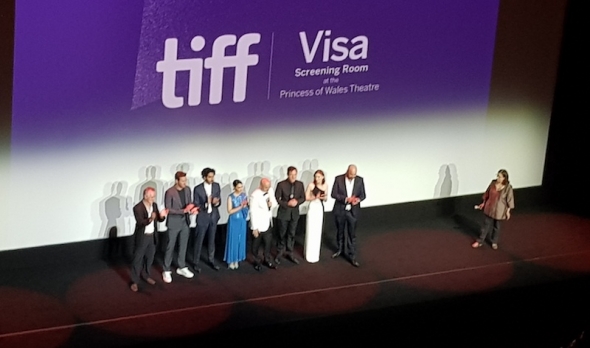 DEV PATEL is a popular actor in these parts – he first came to the Toronto International Film Festival (TIFF) with ‘Slumdog Millionaire’ and boy, did it rock that house. Then there was ‘Lion‘ two years ago… for which he won a BAFTA.

Now, he has done it again – this time with a very different type of film to the previous – Aussie director Anthony Maras’ harrowing but brilliantly executed film about the horrors of Mumbai 26/11 had Toronto both cheering and crying.

Patel, not only stars in the film as a Sikh hotel worker based at the Taj, but has some part in bringing the film to the screen in the first place and has an executive producer credit on the film.

In the brief Q&A following its world premiere screening here in Toronto on Friday evening at the Princess of Wales Theatre, Patel said he actually chased the project and wanted to be part of it.

“When I heard a movie was being made, I knew I had to be part of it,” he told the packed TIFF theatre hall.

Maras said the movie would never have been possible without Hemant Oberoi – the head chef at the Taj who took charge as the carnage raged around them on that October 26 evening.

He requested Oberoi, who has travelled to Toronto, to take a bow. There was prolonged applause and a long standing ovation.

Anupam Kher, who plays Oberoi superbly in the film, was also emotional after the Q&A and said he knew the Taj general manager personally and he had lost his wife and children in the attacks, when three armed gunman had stormed the luxury hotel and laid siege to it for around three days before finally perishing at the hands of Indian commandos.

“Sometimes silence is better,” he said poignantly of his friend whose family had been torn apart – prefacing the comment with the idea that the comment sorry never seemed enough.

He also paid tribute to Oberoi, the head chef at the Taj, whose decision to stay put helped save lives. In the film he and Patel are a partnership of sorts. While Patel plays a slightly errant waiter who has to borrow shoes after his own fall from his moped on the way to work Oberoi is the cool one under pressure and keeps his charges safe in the face of great danger.

Kher said he had been filming only a short distance away that night when the first reports came through.

Initially, it was thought to be a gangster confrontation, then an attack by the underworld, Kher recounted. It was only half a night into the carnage, it became absolutely clear the city was under attack from a well-armed and ruthless, trained terror cell.

Maras paid tribute to the city both in the brief introduction and in the post screening Q&A. He name-checked all the actors, including those who play the three gunman who entered the Taj.

Earlier on Day 2 of TIFF, acv saw The Sisters Brothers and attended a diversity presentation and panel discussion about the identity at play with reviewers and industry stats showing few reviews are black women or from under-represented groups in the US…see social media for both please, especially for real time coverage

REVIEW
Maras’ film is fast-paced and maintains a thrilling and harrowing energy for much of its two-hours and five minutes. He draws you in with a veritable cast of attractive characters and keeps you focused on their fate – even though you know some of them will not survive. There were many acts of bravery that night, both small and large and this film does them all proud. Surprisingly, perhaps, his depiction of the gunman too is layered and sophisticated. While the action might be slick, and the gunfights visually a spectacle, he reminds the audience these were young, angry and deprived ‘boys’ manipulated and brainwashed into killing – as was the case in the real attacks, the gunmen are in constant contact with a shadowy figure who is widely thought to have been a forces’ or ex-forces leader from Pakistan with strong fundamentalist religious affiliations.
Go see this film, if you love Mumbai (even if you don’t or have never been), there is something of the city and its spirit Maras has captured and he and his cast deserve credit for that. Don’t be surprised if it appears on several Oscar nomination lists – and one for best picture is the least it deserves. (But we might be biased about that!).
ACV rating: ***** (five out of five)

Privacy & Cookies: This site uses cookies. By continuing to use this website, you agree to their use.
To find out more, including how to control cookies, see here: Cookie Policy
← Disney Launchpad – six short films aimed to speak to a new generation – executives and director interviews; and reviews, including ‘American Eid’
Buddhadeb Dasgupta – Master lyricist’s films will have place in Indian cinema (obituary) →