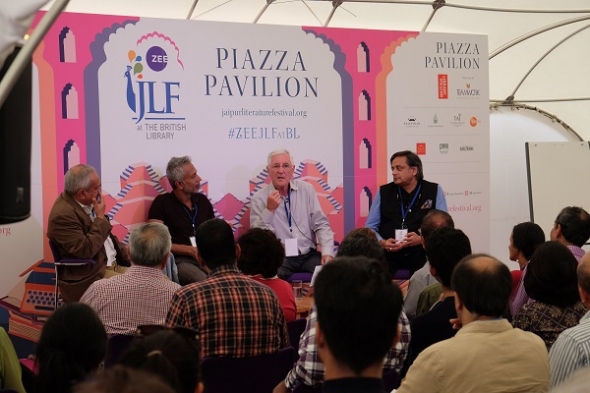 ALL THE SPILLS and thrills of being at the greatest literary show on earth are coming to London for just about two and a bit days and you wouldn’t want to miss out now, would you?

You know www.asianculturevulture.com – as a community partner to the festival – will present, Mallika Victoria: Empress of India, on Saturday (June 15) 3pm in the Mughal Courtyard, with Miles Taylor and Shrabani Basu in conversation, as Vayu Naidu moderates. More on this soon…

You know Shashi Tharoor, fine orator, eclectic writer and Indian bon viveur and MP, is just one of a host of other top names descending on the British Library in King’s Cross, London from this Friday (June 14) to Sunday (June 16).

If the World Cup Cricket gets washed out, then there’s likely to be some unpickable googlies from Shahid Afridi, former Pakistani cricketer and now sporting raconteur (via a first book) and in session with Wajahat S Khan who helped him to pen ‘Game Changer’ and Tharoor, Romesh Gunasekera and Prashant Kidambi and Mukulika Banerjee.

If that passion of India doesn’t get you…perhaps Bollywood might, as Manisha Koirala, a veritable star of the big Indian screen shares her journey from Nepal to screen siren who overcame cancer.

You may well know that Tristram Hunt, author, and one-time prominent Labour MP and now director of the V&A Albert Museum, opens the festival for the first debate with Tharoor and Victoriana expert Shrabani Basu (whose book about Queen Victoria’s munshi was turned into a film ‘Victoria and Abdul’, starring Dame Judi Dench) as they discuss, Of cities and Empire on Friday evening from 5.45pm.

There are more than 35 talks covering a multitude of subjects and concerns, from the role of technology to yoga, from Islamic art and culture to India’s most conspicuous billionaires.

It’s mostly concertinaed most into two days of magic and mystery, where the book lover and the reader who wants to know more about authors and their works just cannot resist.

And inevitably with such a range and scope of sessions and personalities, – you might miss something and so we thought we’d pick six sessions that might well surprise and enlighten you…

11.15am-12.15pm ♦ Piazza Pavilion ♦ The Islamic Enlightenment: Faith and Reason
Much of the Middle East was ahead of its time in the 19th and early part of the 20th Century, its science and discourse were far more developed and discerning – why? Islam, argues author Christopher de Bellaigue in his book, ‘The Islamic Enlightenment’ – which turns the common idea that it is Islam that needs to ‘modernise’ on its very head. Hear de Bellaigue discuss this with co-founder and director of the Jaipur Literature Festival, William Dalrymple.

12.30pm- 1.30pm ♦ Mughal Courtyard ♦ Words are all we have
In this day and age, it is easy to communicate, debate, and share our thoughts, ideas and dreams with anyone and everyone in the world (often via social media). Or is it? What is it that novels touch in the human psyche that social media doesn’t? Why do we want to discuss our favourite novels? And why do they open up a world that can be closed in some senses … Three prominent novelists take their cue to discuss their craft and how it can cross continents and cultures. Sri-Lankan born, British based, Man Booker Prize nominated, Romesh Gunesekera , award-winning Anjali Joseph, and Chinese-born writer and journalist Lijia Zhang discuss with editor and writer Catharine Morris moderating.

5.30pm-6.30pm ♦ Mughal Courtyard ♦ The Vanishing
Our planet is in peril. Once we were close to our earth and lived off it. Now we have literally forgotten how to live, our civilisation is bricks and mortar and roads – author Prerna Bindra’s ‘The Vanishing’ asks urgent questions and seeks a path away from ecological disaster. Ruth Padel’s ‘Tigers in Red’ is an ode to the top cat and a reminder that its majesty is not ours to carelessly squander. Ragu Chundawat is a renowned conservationist and filmmaker whose BBC documentary ‘Tigers of the Emerald Forest’ and recent book, ‘The Rise and Fall of the Emerald Tigers’ has put the big beast of the Indian jungle back in the spotlight, environmentally and politically. How do we preserve our precious earth and its myriad species – are we up to the questions nature will pose us? Hear these authors and documenters of nature discuss the future with John Elliott moderating.

11.15am -12.15pm ♦ Piazza Pavilion ♦ Guru Nanak Traveller, Poet and Philosopher
It was a time of upheaval and strife and virtually two warring sets of ideas and beliefs. Sikhism was born – and preached a positive and modern message to all humanity – love, equality and compassion were more important than rigid beliefs or anachronistic rituals. Much respected Indian diplomat and former India High Commissioner to the UK, Navtej Sarna discusses his work, ‘The Book of Nanak’ with talented chanteuse and British Sikh historian Amit Kaur Lohia.

1.45pm-2.45pm ♦ Durbar Theatre ♦ The City and the Nation State
Teeming metropolises, global cities of power and wealth, migration and opportunity – all make the melting pot, both a threat and a source of economic advantage at the same time. Discussing the contradictions and complexities of citizens who live in them and the fluidity of allegiance – local, regional and national, and supra national, are former Labour Mayor of London, Ken Livingstone, author of ‘Livingstone’s London’, British-born Rana Dasgupta, author of ‘Capital’, about the rise of a new elite in New Delhi, and Mukulika Banerjee, director of the LSE South Asian Centre and author of ‘Why India Votes’.

4.15pm-5.15pm The Yoga Sutra ♦ Mughal Courtyard
Yoga began in India millennia ago, but what relation does its ancient practice to have people all over the world who profess to practise it today? Yoga teachers Ranju Roy and David Charlton from the yoga tradition of DKV Desikachar Chennai discuss ancient Sanskrit sayings and phrases related to yoga and covered in a new book, ‘Embodying the Yoga Sutra’.

Each morning starts with music and each day has nearly different 20 sessions from 11am to last session starting at 6.30p – for the full programme, and to purchase tickets
http://jlflitfest.org/zee-jlf-at-british-library/schedule

Pictures: Courtesy of ZEEJLF at British Library or author’s own pictures