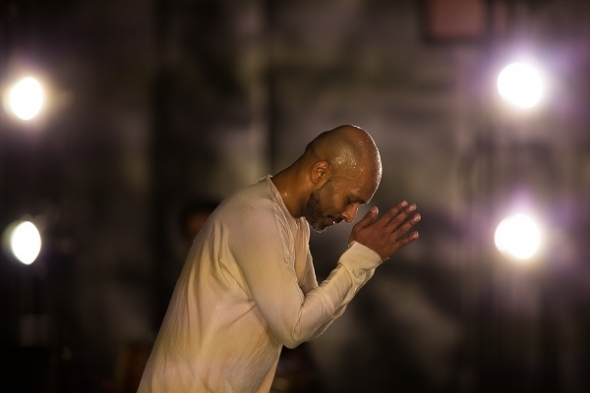 Dedicated to his mother and deeply indebted to the notion of sacrifice and freedom, one of Britain’s foremost dancers (and now more a choreographer) takes to the stage on his own for one last time as a dancer…

Inspired by Greek mythology and the intellectual foundations of western thought, Khan is presenting ‘Xenos’ as his final piece as a solo dance performer.

‘Xenos’ can be seen until June 9 at Sadler’s Wells, the home of British dance, and where Khan is an associate artist.

The world premiere of ‘Xenos’ took place in Athens in February this year and those lucky enough to attend the inaugural edition of Darbar Dance at Sadler’s Wells in November last year, were treated to an early work-in-progress excerpt of ‘Xenos’, termed ‘X’, as a sensational curtain-raiser to the classical Indian music festival’s new dance strand.

Earlier today, Khan featured on the Radio 4 series ‘Behind the Scenes’, talking about what inspired the story behind ‘Xenos’ and following his creative process from December.

Performed as it is in 2018, to coincide with the centenary of the end of the first world war and commissioned by 14-18 NOW (the UK’s arts body to commemorate the First World War), Khan imagines the 1.4 million soldiers (from undivided) India fighting for King and (mother) country and experiencing the bitter winters of Northern France and Southern Belgium.

Reprising the role of a communications engineer, who lays telephone cables in the trenches, Khan takes the audience on a dizzying, emotional and powerful journey, which seeks, in its larger frame, to question and explore notions of western supremacy and moral superiority.

It is inspired too by the story of Prometheus, who created man out of earth and clay. Such is his love of humanity, Prometheus bequeaths Man the element of fire against his father Zeus’ wishes and is destined to die (and live again).

There is live music, mixing both western and Indian traditions with Nina Harries, Aditya Prakash, Tamar Osbone, BC Manjunath, and Andrew Maddick.