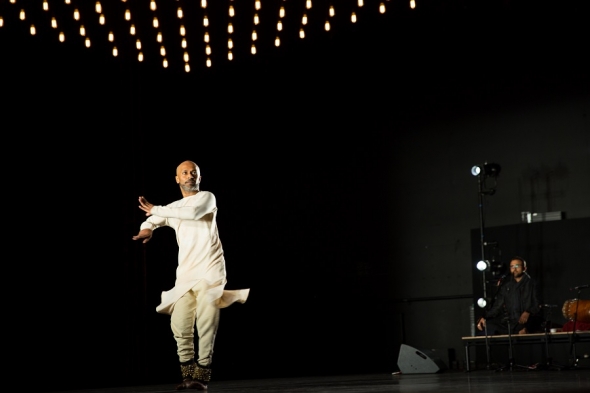 STUNNING in its range and simplicity of form, Akram Khan’s short performance, opening the Darbar Festival (November 9-12) was well worth its considerable billing.

The Sadler’s Wells audience was transfixed – the lighting, the music and the man himself all embodied a very particular form of living, breathing and moving Art.

He was not the only one to do so – either. After Khan, Darbar, settled down to a night of further but different form of musical intoxication.

Indian classical musicians held the stage with considerable authority and poise and in the latter half with the encouragement of bansuri (flute) player Pravin Godkhindi, the audience let go of their stiff English sensibilities and warmed to the music with a more Indian-style clapping and appreciation as the musicians continued to play.

It was certainly a night for virtuosos and whether Sadler’s Wells, the home of British dance, has seen so many in one night across different performances, is debateable.

For Khan, there was familiarity and love right from the very outset from the sold-out auditorium.

For around 20 minutes he held the stage as only he can – as the one Kathak dancer in the UK, who transcends all and every boundary and is singularly best known for doing so.

Last night’s performance, an R&D version – termed ‘X’ – of what will be his very final full-length solo performance in May, ‘Xenos’ – was a passionate reminder that in art we see beyond labels and appearances.

In a brief note of thanks, he spoke about the needs to create new myths and stuck as we are in old ones that seem to serve a powerful monied elite intent, it would seem, on turning the clock back and rendering anyone not of their ilk, as a lower being – this was also dance with an edge and an argument.

He also acknowledged the role of the Bharatiya Vidya Bhavan in Fulham and the Nehru Centre in London, where he first watched Indian classical music and dance and credited these with turning him to Kathak and away from being a potential backing dancer for pop idol Michael Jackson.

You can revel in the slick turns and pirouettes of Khan’s long years in Kathak but at the heart of it all is a generous and abundant humanity.

This seeks to invite and inspire and displays the rich possibilities of human existence and movement – it really was that uplifting.

His longer in-progress ‘Xenos’ piece, is culled from Greek mythology and the story of Prometheus, who created man out of earth and clay. Such is his love of humanity, Prometheus bequeaths Man the element of fire against his father Zeus’ wishes.

Man stands condemned and must now endure the ‘ritual of wars’.

Khan will explore and play out these ideas in that last solo, before he moves to choreography and composition full-time, and if last night was anything to go by, ‘Xenos’ promises to be spectacular and mesmerising.

Last night, we got a glimpse of a new myth in the making – that Man has the tools for his own redemption – by opening up and searching for the Art that exists in all of us.

Khan was superbly supported by BC Manjunath whom Khan held up as a master in his own right and said he continued to learn from – the duo indulged in that most Indian of dance/music forms – the dialoguing/arguing improv – this time between Khan’s ghungroos (feet bells) and Manjunath’s instrument and voice.

LA-based Aditya Prakash also provided vocal backing and it was slightly surreal to hear the ancient intonations of Sanskrit in such a modern a venue as Sadler’s Wells but it is fitting for Darbar – as it seeks to widen horizons.

The section after Khan was taken over by traditional South Indian classical music and borne of the Carnatic tradition.

In some circles, a less popular strand than Hindustani, Patri Satish Kumar on mridangam, Tavil Triplicane Sekar on thavil (Carnatic drum) and Amrit Khanjira on khanjira (another Carnatic hand drum) were tremendous ambassadors.

As is customary, they started gently and worked towards a mind-blowing crescendo.

For the untrained ear, it might have been a bit hard going and one wonders what the dance enthusiasts who had come for Khan made of it, because this was not an introduction to Carnatic music, but the full deal and it works in ratcheting up the response to the music.

This music emanates from South India and is different in form to Hindustani; it has a ring of familiarity to this critic because you can still hear this type of music in temples and at weddings in South India.

The final session perhaps might have been better for the person coming to Indian classical for the first time; the bansuri is an instrument of delicacy and lightness.

In Godkhindi’s hands, you are witness to its full and beautiful range. Up against (and sometimes it is almost confrontational) Surpreet Deshpande’s tabla, it’s sweet and spice, a familiar Indian combination.

In the very final segment, Godkhindi asked us to picture the scene as he played out a traditional folk tune, which shepherds play to their flock…

It was a fitting end to a brilliant and soul-enriching evening and a fine way to raise the curtain on three more nights of both Indian classical dance and music.

Earlier in the evening, Darbar artistic director and founder Sandeep Virdee paid tribute to Khan and Sadler’s Wells artistic director Alistair Spalding for bringing Darbar to the venue, saying the idea started from a conversation in a café, some two years ago. In existence for 13 years now, Darbar’s main home has been the Southbank Centre. Virdee also thanked Sky Arts, a sponsor and broadcaster of Darbar Festival.