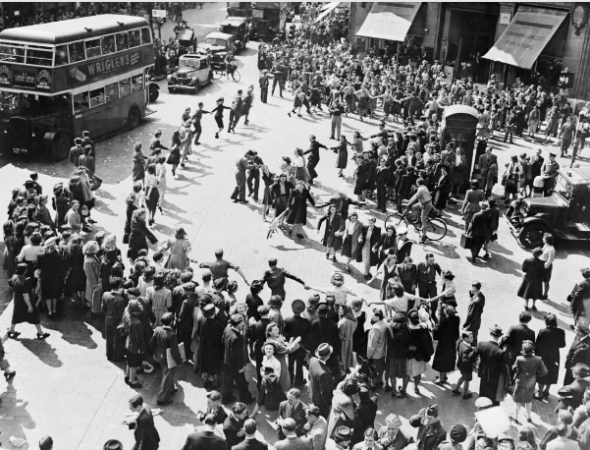 THIS year Britain will mark the 75th anniversary of the end the second world war with Victory over Japan – VJ Day on August 15 – the same date as India celebrates its Independence from Britain.

While India gained its freedom on August 15 in 1947, it contributed massively to the Second World War effort – and many thousands of Indians fought in the Far East and the North east of India in addition to those who also saw action in Europe and Africa.

The Second World War came to an end on August 15 1945 with the defeat of the Japanese and its formal surrender following the dropping of the atom bombs on Nagasaki and Hiroshima on August 6 and 9, respectively.

Many organisations and institutions in the UK are marking VJ Day and looking back at the war effort in the Far East and the fighting that also touched India. Earlier this year, the country marked VE75 Day.

The Japanese lost a famous campaign in 1944 and it stopped them in their tracks in their designs on India. Japanese war planes also bombed Kolkata between 1942-43, having taken control of Burma (Myanmar).

The 75th commemorations of the Battles of Kohima and Imphal were marked last year. The Japanese wanted to invade India and thought that by taking control of it, Britain and other allies would be severely weakened.

They tried to cut off these two towns from the rest of India, but were unable to do so, and many Japanese soldiers died from disease and starvation – while Allied Forces got supplies from British and American planes dropping essentials for those on the front line.

Some troops captured in the Far East and from India were co-opted into an army led by Indian nationalist leader, Subhas Chandra Bose.

Called the Indian National Army, it fought with the Japanese (and was recently fictionalised in an Amazon Prime Original drama – ‘The Forgotten Army’ ).

Bose wanted India to be free from British rule and unlike Mahatma Gandhi and the main political leadership in India in the 1940s, believed it would only come about through violence and an overthrow of the British.

There is much controversy around Bose (born in 1897) – a charismatic and bold leader who believed in equality and was a socialist.

He died in mysterious circumstances in a plane crash over present day Taiwan in 1945 and was friendly both towards Nazi Germany and Imperial Japan, believing they could help secure India’s freedom.

Many died defending Imphal (in the present day Indian state of Manipur) and Kohima (Nagaland) – Indians, Gurkhas and Britons fought alongside each other – and there were also Indian Prisoners of War held by the Japanese. Many were taken following the fall of Singapore and Malaysia to the Japanese.

Nearly 4,000 British and Indian soldiers died defending Imphal and Kohima from the Imperial Japanese Army between April 4 and June 22 1944. There is a monument to these soldiers and a museum in Kohima marking these events.

Among those marking now VJ Day and the Indian contribution is the Imperial War Museum.

It has added interviews and shorter oral recordings of first-hand memories of troops who fought in the Second World War and those who were also involved in the Far East theatre.

Among those who were captured by the Japanese was Muhammad Ismail Khan. He served with the 2/10th Battalion Baluch Regiment as a liaison officer to Headquarters 8th Indian Infantry Brigade (9th Indian Infantry Division) in Malaya (Malaysia) between 1941-2.

He was imprisoned after the Japanese took Singapore in February 1942 and was held at the Seletar camp and later saw action on the Pakistani side in its war with independent India in Kashmir, 1948-49.

You can hear his life story on the IWM website – he talks about his brother who became the first army officer to obtain a Military Cross from the Northwest Frontier Province (see the link below).

There are also a couple of talks organised by the National Army Museum to mark the conflict and the Indian war effort specifically.

Tomorrow (August 14) at midday, Professor Tarak Barkawi, author of ‘Soldiers of Empire’- Indian and the British Armies in World War II – will discuss the Indian contribution against the Japanese with Dr Peter Johnston, head of collections research and academic access at the National Army Museum. (To find out how to listen, see the link below).

On Saturday (August 16) afternoon, popular historian and journalist Shrabani Basu will host a talk, exploring the roles of the Royal Air Force and Royal Navy in the Far East campaigns and look how it is marked today. Called VJ75 ‘Never Forgotten: The War in the Far East and in modern memory’, she will be joined by historians from National Museum of the Royal Navy, the Royal Air Force Museum and the Commonwealth War Graves Commission. Both these discussions are part of the National Army Museum’s VJ Day 75.