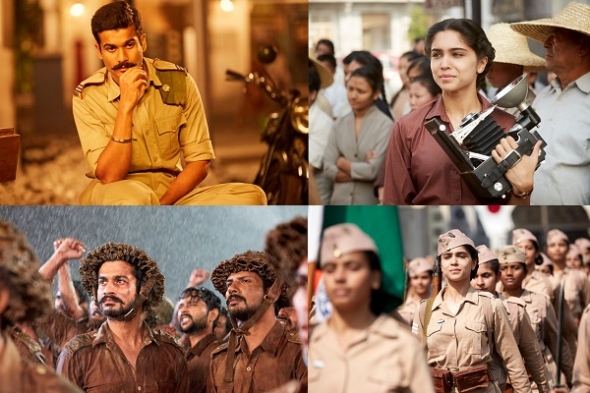 IN RECENT times, there has been a renewal of interest in the Second World War Indian nationalist leader, Subhas Chandra Bose and now well-known director Kabir Khan has produced a five-episode TV series for Amazon set in this period.

‘The Forgotten Army’ dropped onto the streaming platform just a couple of days before India’s Republic Day yesterday (January 26).

Sharvari Wagh as Maya in 'The Forgotten Army'

Khan’s drama, which is the first he has ever written, is not about Bose himself but about soldiers who committed themselves to Bose’s Indian National Army (INA).

This was created in 1942, after the Japanese occupied Singapore and much of South East Asia.

Bose believed the only way the Brits would give up India is through armed resistance – unlike other Indian leaders such as Mahatma Gandhi and Jawaharlal Nehru who believed in non-violence.

Khan essentially focuses on three characters who joined the INA.

Lieutenant Sodhi (Sunny Kaushal), his faithful friend and right-hand man, ‘Arshad’ (Rohit Choudhary) and there is a love interest in the form of ‘Maya’ (played by newcomer Sharvari Wagh) – who forms an attachment to Lt Sodhi and also enlists in the INA. It was well ahead of its time in inducting women into the force and trained them for combat.

ACV has seen the early episodes and it’s a strong period drama which neatly dovetails the history with more personal aspects.

As well as captured Indian soldiers, many Indians settled in South-East Asia joined the INA, believing in India’s freedom from the British.

Wagh and Kaushal both felt like they were telling an important story about India’s history.

While the Independence struggle is well documented, much less has been written about the INA – and in popular culture there is really very little trace of it.

Wagh told www.asianculturevulture.com : “How did we not know about this? There was a sense of pride in being able to tell this story now.”

Kaushal chimed: “It was a real eye-opener for us, we were able to present this (history) to a wider audience.”

The British supressed news about the INA and after the war even prosecuted some soldiers for treason for joining it, but Khan doesn’t get wrapped in the politics or the tactics – the INA planned to march to Delhi and eject the British.

By highlighting the personal elements, he doesn’t get bogged down and as a viewer you can watch the drama with a degree of detachment about the actual history.

Wagh put it well: “While it is a story about true events, this is also a story about inter-personal relationships between people.

“There is a love story and a nice friendship story between Lt Sodhi and Arshad – it’s about the human side of the soldiers.”

Wagh’s character Maya is a feminist and appears very modern – almost unbelievably so.

“So, whatever story you see in the beginning is the real-life story of Lakshmi Sahgal who joined the INA and yes, people may find her too modern but these are based on real events and what happened.”

Sahal (1914-1912) was probably one of the most celebrated figures to have emerged from the INA and became Captain Lakshmi and headed up the first all-women group – the Rani of Jhansi regiment. She later joined Indian politics as a Communist Party member and continued to practise as a doctor into her 90s.

Wagh said she that some of Maya’s character is also based on the famous Indian photographer, Homai Vyarawalla (1913-2012).

We meet Maya in ‘The Forgotten Army’ as she starts a career as a photographer on the newspaper her father runs.

She cuts a glamorous and arresting figure to begin with – but also has a steely and determined outlook, joining the INA.

“I based a little bit of her character on Homai Vyarawalla,” Wagh explained to acv. “She used to wear a sari back in the day and even though she was a Parsi woman and could wear pants and shirts, when she was asked why she dressed in saris, said: ‘I want to do a man’s job wearing a woman’s clothes but I don’t want to look like a man’.

“Women back in the day were strong and fierce – all women are warriors,” Wagh added passionately.

For both, this series matters beyond their individual performances and ratings, they told acv.

“I hope people will feel the gratitude of a nation. They gave us a free nation – not just the INA, but it’s a reminder that we can live freely and say what we like because they fought for us,” said Kaushal.

For Wagh, the message about women rings forcefully.

“Women had no idea about combat – but they fought alongside men (in the INA) and we can take inspiration from the Rani of Jhansi regiment and if you watch ‘The Forgotten Army’, you won’t forget it.”

Khan, whose previous credits include the Bollywood smashes, ‘Bajrangi Bhaijaan‘ (2015) with Salman Khan and ‘Ek Tha Tiger’ (2012), said: “The journey of these soldiers of the INA is a story that needs to be told and it has taken several years of extensive research to gather fragmented memories of these incredibly brave men and women who fought so selflessly for India’s independence.”

Kaushal, the brother of Bollywood star Vicky, will feature in a political period (1990) romance, ‘Hurdang‘, which is set to come out later this year.

Wagh, who is often referred to by just her first name, Sharvari, is set to feature in second instalment of a successful 2005 Bollywood comedy film, ‘Bunty Aur Babli 2‘

*’The Forgotten Army’ is available from Amazon Prime now: www.PrimeVideo.com