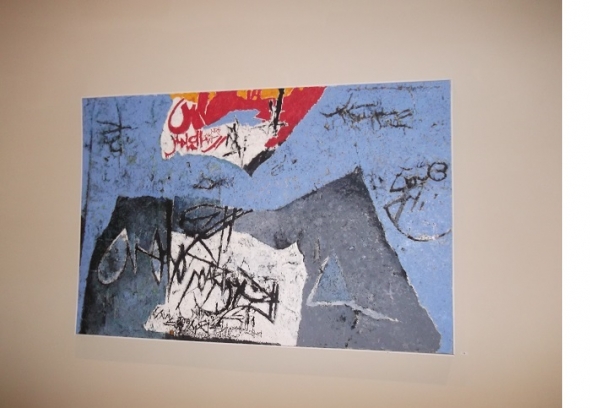 HE is probably one of Pakistan’s best known painters and had a former prime minister of the country – no less – introduce his work on calligraphy, which was unveiled at Asia House in London earlier this month (August).

Jamil Naqsh’s work encompasses a wide variety of subjects from animals, and sensuous nudes to the ancient tradition of calligraphy, and Islamic invocations of God.

One of these was auctioned on the opening night and raised £1,700 for Care Pakistan, a charity which helps educate girls or ‘thousands of Malalas’ as founding member and care trustee Ena Zamin explained.

Shaukat Aziz, who was prime minister of the country, under President General Pervez Musharraf between 2004 and 2007, said Naqsh and the exhibition, ‘The Painted Word’ was a bridge ‘between cultures’ and his work promoted a sense of interfaith harmony and dialogue which was what the world badly needed.

“He really inspires me,” said the former economist and Citibank executive. “And it is about looking forward and Naqsh has encouraged me to promote and support art.”

The perhaps unique quality of Naqsh’s art is that he mixes two traditions, which are usually in opposition, sometimes passionately so.

In Islam, images and depictions of the divine are strictly forbidden – perhaps most keenly of the three Abrahamic faiths (Christianity and Judaism being the other two), Islam is about The Book and the word of God.

Somewhat markedly, in the West, contemporary western art has been hugely sceptical, sometimes openly hostile to the idea of God and the divine, at least over the last century.

Naqsh, who was born in Uttar Pradesh in an undivided India, and studied western art under the British, takes this as his starting point and combines it with the traditional Islamic art of calligraphy, which he also studied formally.

While some of his figures such as horses and women are figurative, much in the calligraphy-inspired work is opaque and difficult, even with a knowledge of Arabic.

But these early impressions give way to something more dynamic and suggestive and have the beauty and near symmetry of a delicate, long lined equation.

Veteran art historian and critic Edward Lucie-Smith has contributed to a book, entitled ‘The Painted Word’ which examines Naqsh’s Calligraphic work, which includes a series called the 99 Names of Good.

Limited special editions are also available, signed by both the artist and Lucie-Smith,  containing original signed calligraphic work, costing £1,000. A cloth bound edition of this has been reserved as gifts for dignitaries.

Lucie-Smith  said western art, especially over the last century,  had moved away from any sense of the sacred at least in those terms most people would readily understand.

Yet Naqsh’s work opened a space, a dialogue between the two usually closed mediums (Islam and western modern art) and showed a richness of thought that believed neither was in clear opposition.

While many artists in the west hankered for art to replace religion as a medium of spiritual experience and other worldliness, Naqsh’s work did all this, without denying the role of the divine.

“In Naqsh’s work there is a much stronger basis to this attitude of art,” explained Lucie-Smith. “Here, we have an artist steeped in centuries old Islamic tradition and he is not inventing religion as painters and artists (in the west) have tended to do.”

The Painted Word was previously on display last month at the Albemarle Gallery in Piccadilly.