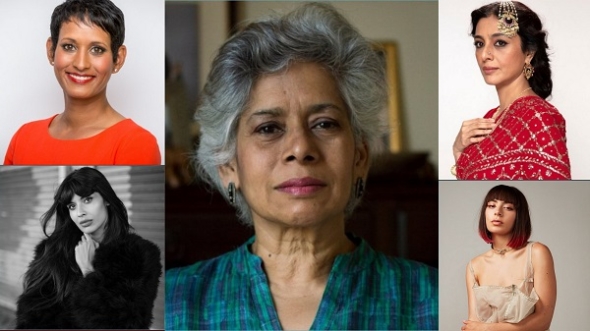 SHE MIGHT not be a Dame in the official sense but Opera singer Patricia Rozario was presented with one of the tops awards at the Eastern Eye (EE) newspaper Arts, Culture and Theatre awards (Acta) last night.

Rozario was awarded an Acta for her outstanding contribution to the creative industry.

The other special award winners were Lord Dolar Popat – for his memoir; veteran historian Kusoom Vadgama for her history book, charting 400 years of history between India and Britain; and Kensington Palace for its Queen Victoria exhibition.

BBC FiveLive presenter Nihal Arthanayake was the host in a pre-recorded virtual ceremony which was broadcast live last night (February 17).

Rozario, who already holds on OBE, has a long and distinguished career at the very top – and is now heavily involved in teaching both in the UK and in India where she is cultivating talent to perform in Opera and other western traditions.

Rozario was at the vanguard of a number of other high profile female winners.

Munchetty told viewers that Mum was her favourite other Asian and the one she would most like to apologise to – after being asked about it in a written question.

All winners were asked at least one question about who they might like to apologise to – or about the challenges of working during the pandemic. Shankar spoke about her father, the legend that is Pandit Ravi Shankar and Vasan about the award being the most exciting thing that had happened to her, recently.

Charlie XCX won the EE People’s Choice Award – which is voted for by readers of the paper. Some winners did not have video acceptances.

Director Mira Nair who did – was presented with the directors’ Acta for her production of ‘A Suitable Boy’, turning Vikram Seth’s magnum opus novel into a six-part post-colonial BBC drama broadcast in prime time this autumn, with an all South Asian cast – and creating history in the process. She saluted British Asian talent and said many looked to it for inspiration beyond these shores.

Tabu who has been working in the Hindi film industry for many years worked with Nair on ‘A Suitable Boy’ and was presented with an Acta for Best Actress in TV, film or drama for her role as a courtesan in the drama set in North India in 1951.

Dancer Seeta Patel triumphed after being nominated four times previously and delighted in winning, and talked about how tough it had been working during the pandemic. She won for her own choreographed and performed piece, ‘Rite of Spring’.

Young Singer-songwriter Joy Crookes was another big winner, taking the Emerging Artist Award. She talked about the challenges of woking in an industry which has few women of South Asian origin working in it.

The EE Acta for Literature went to Kavita Jindal for her novel, ‘Manual for a Decent Life’. Her book has just been published in the US, she told viewers.

Visual artist Rana Begum was the first awardee of the evening – she got the Acta for Art, for her installation at London Fashion Week for the designer Roksanda in February 2020.

Veteran historian Kusoom Vadgama, working outside the formal academic system, was presented with an EE Editor’s Award for her book, ‘India and Britain: Over Four Centuries of Shared heritage’.

Writer Ayesha Menon won an Acta for best scriptwriter – for her radio adaptations of author Vikas Swarup’s ‘Q&A’ . She apologised to Charles Dickens for having adapated his work and ‘Indianising’ them, when asked who she would like to apologise to.

There were also awards for actors Himesh Patel and Sid Sagar, comedian and actor Gus Khan, classical musician Chiranjeeb Chakraborty, restauranteur Shamil Thakrar and Naved Nasir who are behind the non-fiction book, ‘Dishoom – The First Ever Cookbook from the much-loved Indian restaurant’.

Other winners included Royal photographer Anwar Hussein, the London Philharmonic Orchestra for its production of the posthumous Ravi Shankar opera, ‘Sukanya’ – which was performed at the Southbank Centre in London in February last year.

Sailesh Ram, editor and founder of www.asianculturevulture.com presented the Community Engagement Award to the National Theatre for its commitment to Diversity. The theatre has made a number of public pledges to stage and work with minority ethnic communities in delivering its programme. The theatre’s director Rufus Norris collected the award and said there was still work to be done.

Lord Popat’s ‘A British subject: How to make it as an immigrant in the Best Country in the World’ won the EE Editor’s Special Book Award.

The ceremony also heard an introduction from journalist and chairman of the Acta judging panel, Amit Roy and there was a musical interlude with pianist Rekesh Chauhan presenting his ‘Neelam’s Story’ to viewers.

If you want to watch the ceremony in full, click here and register (if you haven’t already): https://actas.co.uk/live/en/page/watchawards