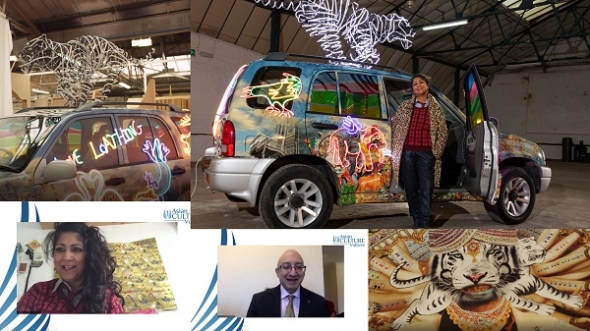 After mocking up Tate Britain, she’s mashing up a car for Netflix…

ARTIST Chila Kumari Singh Burman talks about how she created this artwork on a car.
Inspired by the positive themes of the film, and commissioned by Netflix she brings her unique and creative sensibility to the project.
As an artist who has worked on vehicles before – she has celebrated her father who ran an ice cream van in Liverpool – and relates this to the character of Balram from the film.
In this chat, she talks about the positive sides of Balram and his journey from the village to Bengaluru – from a humble employed driver to a freewheeling entrepreneur based at the heart of India’s tech capital.
In a way, her illiterate father made it out of Punjab to Liverpool using his streetwise intelligence and acumen to build a business in the UK – and that is reflected in Burman’s art and this project.
He also emblazoned his ice cream van – a consistent motif in Burman’s work – with a Bengal tiger. Both the ice cream van, the tiger and artwork on a tuk tuk and rickshaw are all visible too in her most recent large scale project for one of Britain’s most revered art institutions – the Tate.
You may have seen our interview with her about her Tate Britain Winter Commission – which could be seen from the outside of Tate Britain in London from December 2020 to February 21. As well as ‘mocking up’ the Tate Britain façade, she also had a tuk tuk emblazoned with art and embellished it too with music and trinkets…
Where will The White Tiger car and Burman go next? Find out by watching…

With thanks to the artist, Netflix UK and Organic Publicity.

Check out the latest pictures (22.02.21) posted by Burman as the car goes on a spin in London – next to her Tate Britain Winter Commission – ‘Remembering a Brave New World‘ (There is a glitch with Instagram posts when viewed on a mobile phone 👇 best seen on a tablet or a bigger screen – or click on Instagram button.) 🙏🏾

Privacy & Cookies: This site uses cookies. By continuing to use this website, you agree to their use.
To find out more, including how to control cookies, see here: Cookie Policy
← ‘Britannicus’ – Classical theatre as it should be – burning and troubling… (review)
JLF London 2022: The Birangonas – Rape as a tactic of terror in Bangladesh war; The Serpent and how he stuck up contact with former C4 TV executive Farrukh Dhondy.. →