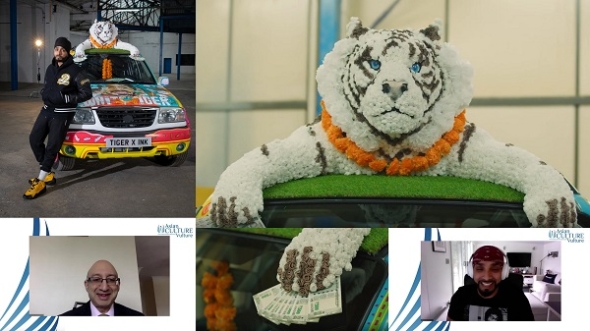 ACV talks to the British artist Inkquisitive/Amandeep Singh about his artwork inspired by the film, ‘The White Tiger’, and commissioned by Netflix…

Watch Inkquisitive talk about how he made this…

Inkquisitive: ‘It’s opened up so many more doors…’

YOU DON’T have to have watched the film, ‘The White Tiger’ to appreciate the artwork created by Inkquisitive (Amandeep Singh) – though it might help…
Inkquisitive talks about the commission by Netflix – this is the first time he has ever created artwork on a car before – the challenges, the inspiration and what the film means to him.
It should be said that we focused on the positive aspects of Balram’s character (played superbly by newcomer Adarsh Gourav).
You can see more about the film in our interviews with Gourvav and Priyanka Chopra Jonas in our video.