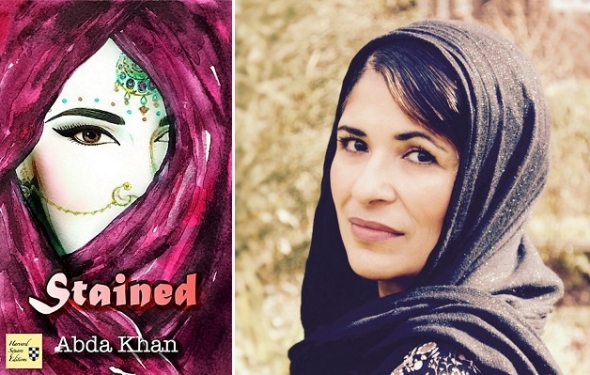 Well-established criminal lawyer, Abda Khan, was one of several high-flying women to be recognised at the Asian Women of Achievement Awards yesterday, receiving an official highly commended notifiction by the judges for her debut novel. In this interview, she talks about ‘Stained’ – which examines the issue of rape within the South Asian community…

TABOO and largely surpressed as a topic in the South Asian community, sexual violence is hardly acknowledged, let alone discussed or tackled.
However, this didn’t stop author Abda Khan from exploring the issue in ‘Stained’ – which follows the story of 18 year old, British-born Pakistani Selina, who is raped by a well-respected member of her community.
Out of fear of bringing dishonour to her family, Selina keeps her ordeal secret and it is these hidden voices that Khan has engaged with through 25 years as a criminal lawyer, which compelled her to write this story. Not only has the book allowed her to raise awareness of the issue through talks both here and abroad, ‘Stained’ has acted as a beacon of hope to many women who can relate to Selina’s hidden anguish.
Her work has caught the attention of many and the citation at the AWA awards shows that she is having an impact on real issus.

www.asianculturevulture.com (ACV): What inspired you to write ‘Stained’?

Abda Khan (AK): I’m a solicitor by profession and I’ve worked in the legal industry for 25 years. So it was the legal background and some of the communities I’ve lived in that prompted me to write it. A few years ago, I was looking to read some fiction about the women I’ve come across and the issues they’ve dealt with such as rape, sexual violence, honour issues and so forth, and I couldn’t really find anything in contemporary British fiction that depicted these characters. I thought these characters do exist but they’re missing from fiction, which I thought was a great shame. So that’s what prompted me to write this book. It’s all the incredible women I’ve met through my career really.

ACV: Did you go into the story with an aim or message in mind?

AK: The idea was to write about taboo subjects that rarely get written about and rarely get discussed. I wanted to start a little bit of a discussion and maybe highlight some of these issues, especially within the South Asian community. The aim was to write a good story but also use it as a vehicle to bring these issues to the surface. I’ve now done lots of talks up and down the country and in the US (the book’s publisher is US-based) to talk about these issues. Once you start talking, people are very keen to discuss and are surprised when you throw facts and figures at them so it does begin a bit of debate, which is what the aim was.

ACV: Through your 25 years in law, you’ve spoken to many women in the South Asian community, what do you think has surprised you the most?

AK: I think what happens a lot in South Asian communities is that honour gets put before the needs of the woman and that’s what I’ve always found most shocking. A woman may have been raped or had violence inflicted upon her but often the family would either blame the victim or they will keep it quiet because they don’t want people to know. Consequently, what happens is that the woman’s needs at that time aren’t being met so this can lead to depression, suicide and long-term mental health issues.

ACV: As you mentioned earlier, you’re discussing quite taboo subjects in your book. How have people in your own community reacted to your story?

AK: Most of the people I’ve come across have been really supportive; my family, friends and people in the industry. There has been the odd person who’s challenged me on what I’m saying as though it can’t be true or perhaps I’m exaggerating. But I’m not. And there are plenty of case studies out there that would back up what I’m saying anyway. I find the people that I would like to get to often don’t come to these meetings, which is a shame. I’ve actually had lots of women contact me through my website to say something similar happened to them and they find it therapeutic to read about. But also women have contacted me to say that they’ve decided to go to the police and they’ve asked me how to go about it.

ACV: What advice would you give to women who may have suffered from honour-based violence and can’t seem to find a way out?

AK: I know it’s difficult because being raped or sexually assaulted in any way is a really harrowing thing. And in our South Asian community, I know how difficult it is to go home and tell our parents. So if you don’t feel you have anybody close that you can talk to, you can get free confidential advice from Women’s Aid, Rape Crisis, Victim Support and SARCs (Sexual Assault Referral Centres). You can get medical help, get counselling and you can store the evidence for years if you decide to change your mind later on. I know it’s very difficult to think about these things at the time but I just want women to know that there is help out there. A lot of women don’t know about all these avenues of confidential help that’s available to them. You don’t have to go to the police.

ACV: How can we solve the issue of honour-based violence in Britain when women aren’t coming forward, which makes it difficult for police forces to help?

AK: To be honest, when I went to the US, I realised how advanced we are here. They don’t even have a working definition of what honour-based violence is and it’s just classed as a murder. I think we have made a lot of progress. But the lack of information is what bothers me. Yes, we need to change attitudes and yes, we need to get into the communities but that’s long term and I think in the short term, we just need to make sure that victims get help. Out of all the women I’ve come across, not one of them have been to the police. It’s always been about having to deal with it, bury it and brush it under the carpet. You very rarely see anything in the media about information. It’s about getting it into the hands of the right people.

ACV: You’re now working on your next book. What’s this one about?

AK: The book is called ‘Razia’. It’s about modern day slavery and follows a London lawyer who gets embroiled in the life of a domestic slave, which takes her to Lahore, Pakistan. It introduces her to the tangled, feudal systems of bonded labour and her quest to try and help this girl. It’s also about topical issues such as identity and honour-based violence but the overarching theme is the one of slavery, which again is very rarely written about. There are 13,000 ‘slaves’ in Britain and millions around the world that are trafficked or sexually exploited. Bonded slavery is a generational issue where families get entrenched into slavery by way of a feudal landlord system. It’s really just another topic that I really care about so I decided to write about it.

To find out more about Abda Khan’s next (crowdfunded) book: https://unbound.com/books/razia