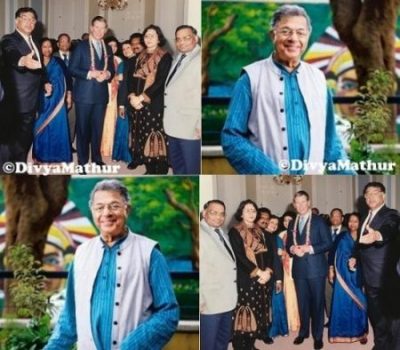 HE WAS A CULTURAL colossus in his native India but also spent a significant time in Britain and was a popular and much-admired figure among the arts community here.

There was a huge outpouring of emotion on the news of 81-year-old Girish Karnad’s death on June 10 and many who knew him when he was here, expressed their sense of sadness, grief and loss. The South Indian state of Karnataka, where Karnad lived and worked most of his life announced three days of mourning – such was his stature.

He was a Renaissance man, perhaps unlike any other in modern times in India. He wrote plays, acted in films, directed both, and more latterly was simply a writer of immense stature and intellect. He held a number of awards from the Indian government and was a totem for many of a liberal, progressive, and creative India.

Born in Bombay Presidency, as it was then in 1938, his family moved close to Bengaluru (Bangalore) in Karnataka in southern India and after graduating from Karnataka University, he become a Rhodes scholar and studied at Oxford University.

His first play in Kannada – the language he wrote his plays in – ‘Yayati’ (1961) was a critical success and an imagining of a generation of figures that came before the Pandavas depicted in the ancient Hindu text, ‘The Mahabharata’. It was a huge success and translated into many Indian languages. ‘Tughlaq’ in 1964 proved to be an even bigger critical and popular smash, and was about a 14th century Sultan of Delhi who agonised over the way he should rule his subjects. Historical plays were not just his forte, his ‘Boiled Beans on Toast’. came to Waterman’s Arts Centre in Brentford in 2015 with Lillete Dubey’s (‘Indian Summers’, Channel 4) Indian theatre outfit and is very much about urban India. old and new.

His first film, ‘Samskara’ (1970) was also written by him and he played the lead role in this anti-caste drama in Kannada. He had a close association with one of the prominent figures of Indian parallel or independent cinema, Shyam Benegal and had a long and acting career- which he said always helped him to fund his work in the theatre.

In the UK, he could be seen in the film, ‘Life goes on’ (2009) directed by UK based- filmmaker Sangeeta Datta.

In an article for the Indian magazine, Outlook, she wrote about the friendship the late actor Om Puri struck up with Karnad on the set of this family saga set in London, featuring Soha Ali Khan and a turn too from Khan’s iconic Indian star mother, Sharmila Tagore.

“I remember how involved both Om and Girish got, so while I was shooting a scene with Sharmila Tagore, they would be huddled under the stairs rehearsing intensively with the young actors.”

In the film. based on Shakespeare’s ‘King Lear’, Karnad played the father figure, and Datta said their collaboration was “brilliant” and Karnad never failed to impress with his acute sense of history.

He visited Britain often and served as First Minister (Culture) at the High Commission of India and was director of the Nehru Centre (in Mayfair, London) – a multi-arts venue that promotes Indian associated culture and art – between 2000-2003.

Ash Kotak, writer and artist, said he valued Karnad’s friendship deeply and would miss his encouragement and belief.

“He was a champion of my gay rom-com ‘Hijra’, which he come to see at the Bush Theatre (in west London) and overruled the spontaneous attacks on the play by homophobic Indian playwrights – can you imagine such a thing – that very night by pulling me away and buying me wine.

“The play went on to be an international success and was even translated into French. He would call me up excited and encourage me to speak up – for a straight man with a public voice in India, where gay sex was illegal, it was much needed.”

Karnad knew he was a target for the far Right in India, but never wavered in standing up for what he believed in and often criticised those who wanted to restrict debate and accentuate religious and ethnic differences.

Karnad took over as director of the Nehru Centre, which had been created in 1992, and quickly made an impression.

London-based writer and culture curator Divya Mathur worked closely with Karnad when she was at the High Commission.

She has organised a tribute event at the Nehru Centre for tomorrow (Nehru Centre, 6.30pm) with a range of speakers, both those of Indian origin and others who were just as inspired by him.

She told acv: “In a career spanning six decades, he (Karnad) acted in both mainstream and parallel cinema.

“He fearlessly raised his voice on varied socio-political issues. So naturally, we were awestruck but of course delighted to the core. I had the opportunity to work with this great scholar and a wonderful human being for just over three years.”

Many of India’s top figures from the world of theatre and film were visitors to the Nehru Centre during his tenure there and these included, Shekhar Kaur, Naseeruddin Shah, Shabana Azmi, Shyam Benegal, Jaya Bhaduri (Amitabh Bachchan’s wife), and Shah Rukh Khan. It was no mean feat to get such an illustrious line-up.

Mathur said staff were very loyal to Karnad as he carried no airs and graces and tried to involve everyone in the work the Nehru Centre was involved with – one year, staff from Nehru Centre visited Edinburgh Festival to better understand the UK arts scene.

Mathur concluded: “Above, all he was such a lovely person that, not only I, but every one of the staff members just doted on him.

“When I heard the sad news, I cried all day but as soon as I was asked to organise a tribute event in the afternoon, I started to contact all his close friends and associates and within a few hours, I had everyone I wanted on board, such is his charisma, even after he is no more…”

The list of speakers, and the different fields they represent, is indeed impressive. (See below for more).

Karnad is survived by his wife and two children, one of whom, Raghu is a writer himself.