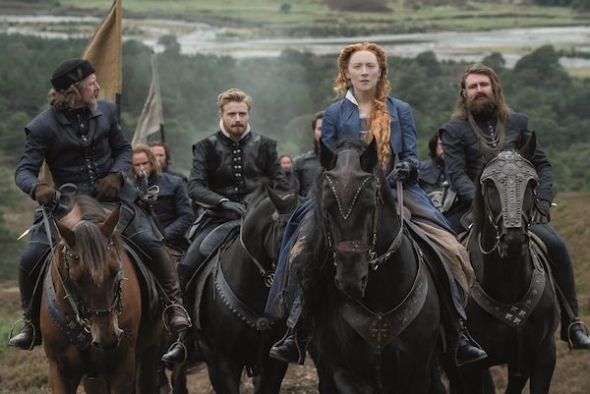 Shown in the Hollywood Special Presentation strand of IFFAM 2018…

SET SURELY  to become one of the films of 2019, ‘Mary, Queen of Scots’ is a rousing, deeply dramatic and utterly engrossing production that delivers for this critic.

This is ‘Game of Thrones’ without the dragons, but centred around two very powerful and different women, who ruled their respective nations, Scotland and England and ultimately moulded the destiny of two countries becoming one political entity in the 18th century.

If history is not your bag and women dominating the screen isn’t to your taste, this might not be for you – the male characters are a bit flimsy, but these are insubstantial vexations.

The beauty and charm of this film is not in the  political machinations or simply the intrigue of the courts, depicted admirably, in both countries, in this film.

What makes it compelling is the way the two women have been portrayed – strong, successful (to a point), smart and every bit a match and more for the men who surround and sometimes plot against them.

Saoirse Ronan is quite magnificent as Mary and equally presupposing and intimidating is Margot Robbie as Elizabeth I, eschewing her usual pretty girl look on the big screen for something eminently more gritty and grisly – the opening shots of her show her face to be scarred but smallpox.

Throughout the film, the two cousins (once removed) vie for each other’s affections and crowns – and the political domination it will offer them.

Director Josie Rourke – whose first film this is after helming the Donmar Theatre (London) – gets great performances from the two previous Oscar nominees and don’t be surprised if this film picks up an awards momentum when it opens in the UK in January.

There is an impressive array of supporting talent from David Tenant, Adrian Lester to Guy Pearce, to name just three.

The story is told back to front and starts at the end of Mary’s 44 years of life.

All the major points are covered, but like many historical dramas, it is a mix of accepted factual reality and imaginative flights – the meeting between the two deemed to be one of the latter.

Forget that though and enjoy this film for what it is – two women going head to head, toe to toe, and not leaving any quarter unturned. The scene where the two meet is electric and every bit as powerful and memorable as when Al Pacino and Robert De Niro meet in Michael Mann’s ‘Heat’, and when they do, the suspense and tension persists.

Shekhar Kapur (who is here as the IFFAM Talent Ambassador and whose interview with us is to come) helped to put Elizabeth and her achievements on the map.

This film will help to bolster Mary’s – the question is how did we go backwards?

These queens were every match (and more) for the men they encountered – when they had to scrap, they did, but England had to wait to Victoria to see a woman of such substance ascend the throne again and question notions of obvious male superiority again.

‘Mary Queen of Scots’ releases in the UK on January 19 2019 and was shown at the International Film Festival and Awards Macao on December 11 in the Hollywood Special Presentation strand.

Privacy & Cookies: This site uses cookies. By continuing to use this website, you agree to their use.
To find out more, including how to control cookies, see here: Cookie Policy
← London Film Festival 2020: ‘Mangrove’ – Moving and timely slice of British history… (Review)
London Film Festival 2020: ‘Mogul Mowgli’ – Riz Ahmed: “This is an unapologetically brown film, unapologetically bold in its creative vision” →