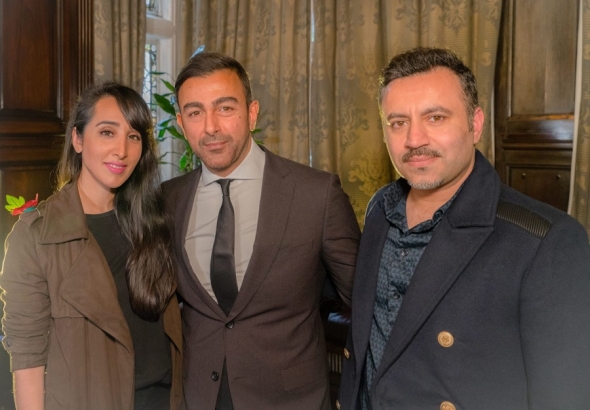 Many of us might harbour a secret desire to be in a film, even though it’s some way from what we might do normally… BBC journalist and B4U Music presenter and www.asianculturevulture.com special presenter Attika Choudhary tells us what happened when she got a surprise call from the filmmakers of ‘Arth 2 – The Destination’ which deals with the delicate and sensitive issue of extra-marital relationships, domestic violence and is an adaptation of a much loved Bollywood classic.

FROM the outset, I want to say it was a huge thrill and quite an honour for me to be in a film but it’s not really about me.

I believe this is all about building bridges others can cross too – especially young British Asian women and particularly women of Pakistani origin living here in the UK.

I think there are great opportunities for them in what is an exciting phase in the development of Pakistani cinema.

I hope my example will inspire others and show that there is a place for British talent in both Pakistani and Indian films – whether they are shot here in Europe, or in Pakistan or India.

Equally, the Pakistani filmmakers have taken inspiration from an Indian classic and I believe strongly art should have no boundaries or borders. These are things put in our heads by others – talent is talent and we should not be concerned about any talent’s origins but what they can bring to a project!

Now let me tell you how this all came about…

I was first contacted by Adnan Qazi who is the London line producer for the film – ‘Arth 2 -The Destination’.

The film producer Hammad Chaudhry – whom I had connected with at the Cannes Film Festival – wanted me to be involved in this film.

I knew that one of Pakistan’s biggest film stars – Shaan Shahid – was behind it and that it was a contemporary remake of a Bollywood classic – ‘Arth’ (1982) by Mahesh Bhatt but I didn’t know a lot more.

I didn’t know that they were filming in London and I told him that I would happy hosting a film event – I’ve done a few of those, where I am the compere for a premiere or similar.

I thought it was going to be like that and what I usually do as part of my normal job.

I was quite taken aback.

I knew Shaan (as he is commonly referred to in Pakistan) is a fantastic filmmaker and actor and it would be a high-end production but also how seriously he takes his art which inspired me.

Shaan gave me the script. He remembered me from an interview I had organised with him in 2012 – he is such an icon in Pakistan. He is like Tom Cruise in Hollywood or Shah Rukh Khan in Bollywood – we’re talking about that incredible level.

This was our first face-to-face meeting. I’ve met tons of stars through my work both from Hollywood and Bollywood and he really has star presence.

I don’t normally get fazed, but there was a small part of me going ‘I am working in a film with Shaan, stay cool! What if I don’t perform?’ but then the professionalism kicks in and you focus on the task at hand.

I can’t talk very much about my role because it is an important part of the story and it would reveal important plot details, but Shaan was very reassuring and put me at ease.

He went through the script with me and then I went through it on my own and learnt my lines. He gave me the opportunity to make it my own which was great.

The original was very controversial for its time. It’s such a bold subject about extra marital affairs and something people don’t really talk about. The original was released in 1982 and really ruffled people back then, but it was very well made and treated the subject with care and sensitivity.

Shaan was coming from the same space and Mahesh Bhatt (the writer-director of the original) has been very supportive.

Adultery hasn’t featured in very many Bollywood or Pakistani films before, but the important aspect of this film was that it is about female empowerment (something he talks about in his interview with www.asianculturevulture.com)

This story is told from a woman’s point of view and it’s about the emotions anyone can go through in such a situation.

I am very honoured to be part of a pioneering film like this because I feel the Asian community is closed about this subject – and it happens, in every community and everywhere. Anyone can watch this film and appreciate it.

I memorised my lines and I had to have my wits about me; I was conversing between two languages – both Urdu and English. Shaan gave me the flexibility to do it either in English or Urdu, but I wanted ordinary Pakistanis to understand what it was I was saying exactly…

It was in front of a lot of people – not just the large production contingent, mainly British by the looks of them, but an audience too.
Shaan is a musician in the film and he has just released this song ‘Murshed Ji’ (Rahat Fateh Ali Khan, Sahir Ali Bagga), and I meet him and his friend (in the film) ‘Usma’ (played by Uzma Hassan) who is a writer and has helped him compose the song.

It’s quite an important scene – see the film and we can talk about it!

It was a tremendous experience, I really loved doing it. I haven’t seen the film and can’t wait to see it.

Would I do it again?

I don’t really covet a career as an actress but if it’s like a special appearance or something that resonates with me or is a bit edgy, then yes, I’d consider it, but my heart lies in presenting and being a journalist – it’s what I’ve been doing as a career and though I studied law and still have a huge interest in it, I still occasionally have to pinch myself at work and say, is this for real?

‘Arth 2 -The destination’ is out on release globally from today…

Shaan Shahid talks to acv about ‘Arth 2 -The destination’

Attika Choudhary has presented for acv at the Cannes Film Festival and Jaipur Literature Festival – see her on our Youtube channel and subscribe!