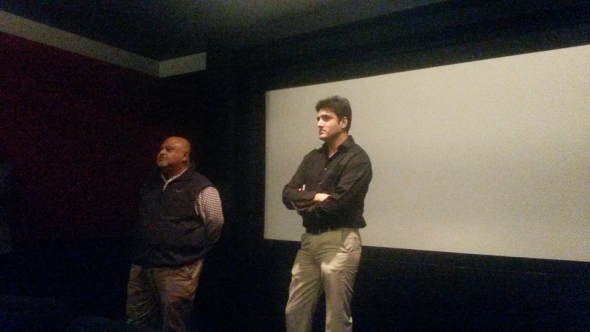 Feature about Kashmir covers both sides of conflict well, but its power is compromised…

LET it be said from the very outset that this was a first cut of the Indian film, “Identity Card”, shown abroad.

It still required some editing and tidying up, as veteran Bollywood actor Saurabh Shukla (“Barfi“, “Slumdog Millionaire” and pictured left) was keen to point out at a low-key UK premiere screening in London last night.

Nevertheless, “Identity Card” is a sincere and genuine attempt to deal with the thorny issue of Kashmir and in places does a decent job.

All involved at a basic level should take some credit in making a movie about a tough and difficult subject.

The film centres around an inexperienced Delhi-based TV reporter who is Muslim (Nadia, played by Bajpai). There is also her Hindu student friend (or possibly more, rendered by Furqan Merchant on right in picture), with a high-ranking father in the Kashmir administration and a Kashmiri local guide, the slightly oddly named, ‘Raju’.

They all get picked up by the police or rather more sinister, ‘Special Task Force’ and are interrogated. Why is never really explained properly.

Budget considerations apart (this is a low-budget independent production), the story is told in a series of ultimately irritating flashbacks and the twist, such as it is, seems gimmicky – though does allow for an interesting argument about the brutal way the police and army act in many conflict zones.

To preserve the lives of thousands, you have to kill the ‘terrorists’ and if you kill a few innocents along the way, well, it’s ‘collateral damage’, but is done for the greater good, though as Shukla pointed out in Q&A afterwards, it’s still wrong.

Shukla revealed that much of the film was improvised – with a tight script and more focus on the central characters and plotting, it would have been a stronger film. More experience at the helm or in the scripting would surely have delivered a cleaner, leaner, more linear, more direct story.

It’s a shame it starts rather crudely and looks too much like a stereotypical, ‘the police are brutal, cruel, vicious’ type drama, simply damning those in authority and blaming those for the troubles.

Sure, that such cruelties have occurred at times, no one would seriously doubt –  but to engage a (western or metro) audience, which has seen it all before, it’s better to go deeper and more subtly.

When it does, this film has power and communicates volubly.

Shukla’s own character is one of the strongest, an angry and bitter cop, he is haunted by the suicide of his teenage son.

But this is no depression-induced act of tragedy: he was a suicide bomber, who crossed the border and trained as a ‘soldier of war’ or ‘terrorist’ (depending on what side you want to take) and returned to Srinagar to die as a ‘martyr’ or a misguided, confused, stupid fool, as his father intimates.

Shukla expanded on this, saying there was a goodness and decency about the people of Kashmir that had long been obscured.

“It’s not about whether it belongs to India or Pakistan, it’s about what it means to be a free land.”

London-based Merchant said, in the Q&A, that when filming he found people in the valley not to be consumed or taken up with the troubles – they were keener to talk about life as it is for many of us, about the routine of their lives: surviving, laughing, looking after their family, and enjoying time with their friends.

“We found the people there, as normal as we are,” he said. “Most people discussed the basic problems, rather than the issues.” At one level that could be read differently – in that the troubles are too painful and awkward to discuss with innocent but well-intentioned outsiders.

This film has a decent heart and soul and you want to like it, because it does try to show why Kashmir is so troubled and not at peace, in the wider sense, but there are some issues about the production that may ultimately limit its screenings abroad.

While this is not on the same level, the rather more sophisticated and ephemeral play, “The Djinns of Eidgah”, by Indian playwright Abhishek Majumdar, shows that there is beginning to be a dialogue at an artistic level in India, about the region and its issues.