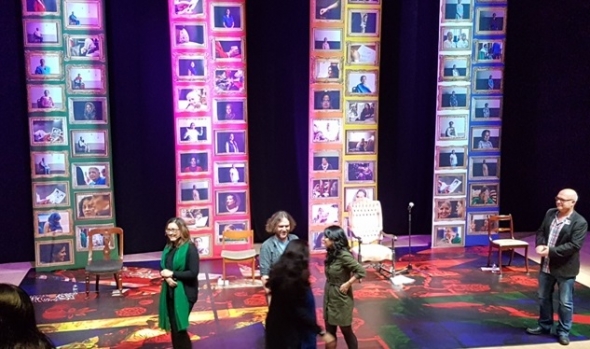 PART of an Alchemy commission, developing a previous incarnation, which was first created by Sajeela Kershi, and involved Kapoor and Gulati, this has changed…

The women present monologues about different experiences of women followed by a brief question and answer, to the background of Bollywood songs.

It begins by a salute to sisters: “Here’s to strong women, may be know them, may we see them, may we raise them’ and to the ‘Kick arse women in the crowd!”

The first one is performed by Kapoor which sees her walking up and down the stage doing some imaginary boxing and saying dialogue like: “Marriage is like having a pet, you might be allergic to it, but you soon get used to it!”

As she continues with her story, she talks about how when her husband lost his job as he began to be controlling and abusive towards her.

“I wasn’t allowed to go out and was only allowed to see my family for five minutes. I was pregnant with my first child and I found out he was having an affair.”

This is a super woman figure, survivor of abuse, who works in a local primary school, and finds time to teach English to the aunties in the community.

The second one has Gulati sitting on a stool playing a daughter reading her mother’s letter which was never posted. It’s very poignant and all about loss and intergenerational conflict where she learns a lot about her mother past and to accept.

“I hated her for disowning me after I got married to James. If you only knew mum, how I’ve suffered how I felt incomplete without you in my family.”

The last one has Hazarika putting on an ethnic voice talking about a woman looking back at her past and also in the contemporary sense, it’s about living and coping with old age.

Basically, this was a laudable idea, but hastily presented and it could have done with editing and better direction.

It was enjoyed by the audience of mainly women, especially women’s groups who shared their memories for this show.

Listing
The show is also part of the touring Alchemy (taking the Southbank shows across the country). There is a final performance on Saturday (June 3) at 5.30pm, The Cast, Waterdale, Doncaster, DN1 3BU