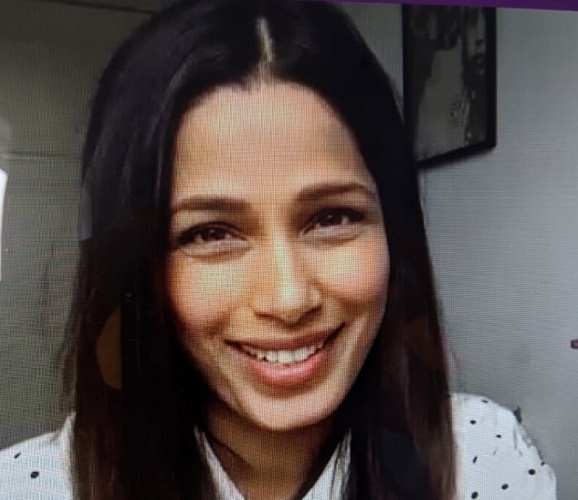 BEST-KNOWN as an actor Freida Pinto said she has spent the last four years building up Freebird Films Entertainment and it’s set to be more active active across film, and TV – and make both documentary and narrative fiction.

It was recently announced that Pinto’s company is linking up with Hollywood actor Gabriella Union’s I’ll Have another firm to make a series adaptation of ‘Dressed in Dreams: A Black Girl’s Love Letter to the Power of Fashion’ by Tanisha C Ford. Union has a first-look deal with Sony Pictures.

The New York Times best-selling book is about the ins and out of fashion and style for a black woman, covering among many things, subjects such as Afros, earrings, sneakers and hoodies. It’s been reported that Pinto has eight projects in development across the TV and film sectors.

While Pinto talked generally about how she viewed her work as a producer, she also spoke about getting more sleep during the lockdown, while at home in Los Angeles, reading more and thinking about her activism and advocacy and how that might be promoted through her work and on her social media channels.

Her tie-up with Union shows the kind of work she is interested in producing.

Pinto also expressed her admiration for Jameela Jamil, the former Channel 4 TV presenter and radio DJ, who has made a name for herself stateside, starring in the US drama, ‘The Good Place’.

She has built a huge social media following, since establishing herself as an actress and routinely champions causes close to her heart including, body shaming, being kind to oneself and mental health and well-being.

Pinto conceded she wasn’t very active on social media like some other stars and didn’t enjoy it (like some), but vowed to use it more to throw light on her producing work, and the causes she believed in.

She explained that she liked to research potential projects very thoroughly and met with those who had ownership to work she was interested in developing.

“It’s got to be for the right reasons and a story I want to tell and tell really well,” she told critic Anna Smith, of the UK Critic’s Circle.

Pinto talked about her life and well-being during lockdown and about her company’s ambitions on Sunday (July 5) as the curtain fell on the London Indian Film Festival’s At Home conversation series segment and other digital offerings between June 25 and July 5, and was the closing finale.

She also briefly talked about meeting Southall Black Sisters and her role as ‘Jas’ in ‘Guerrilla’ (2017), the fictionalised Sky drama about the Black Panthers UK with her character being loosely modelled on the late activist and author Mala Sen, who was part of the real UK Black Panthers organisation in the 1970s.

Pinto said she would like to do more comedy but felt her serious persona and focus – as seen by others meant she didn’t get approached as much as she might have liked.

• LIFF is working on more screenings, and conversations and says this part of the festival will continue till August 19 now. Two films initially scheduled to screen in the weekend (July 4 & 5) ‘The Miseducation of Bindu’ and ‘The Casteless Collective’ will be available on the platform. To find out the latest, follow ACV and LIFF social media and check website: https://www.loveliffathome.com/