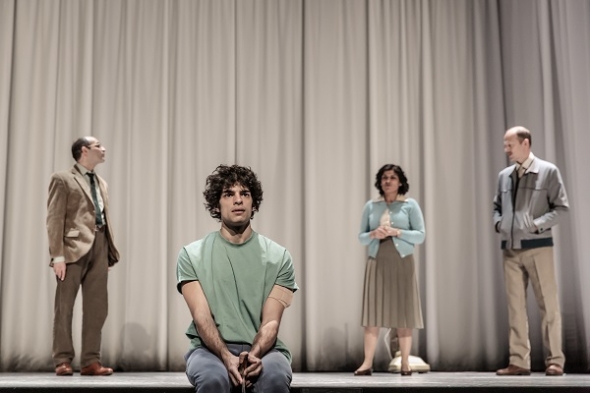 Regarded as a complex classic, one of the leads talks to acv about its particular challenges…

SYREETA KUMAR is an actor whose work I have enjoyed over the years and she can now be seen in the classic show, ‘Equus’, written by Peter Shaffer.

It is currently on tour and Kumar plays ‘Dora Strang’, mother of ‘Alan Strang’ (Ethan Kai) who has committed a violent act of blinding six horses and is undergoing a psychiatric evaluation by child psychiatrist, ‘Dr Martin Dysart’ (played by Zubin Varla), while the parents and the rest of the community try and understand what happened.

It’s a very physical play with a lot of movement, sound effects and lighting design which on one level works as thriller and on another, a psychological drama – because we all know what has happened – but at the same time we need to know why?

The ‘Why’ question is very deep and explores the nature of violence, religious worship, sexuality and eroticism.

Kumar said she was gripped by the script when she was invited to join the company.

“I didn’t know the story and I couldn’t stop reading it. It has many themes, but Peter Shaffer writes a lot in his plays about self-examination and meaning of life, meaning of ourselves, and our (forms of) worship.”

She explained that the playwright had heard about a real incident where a teenage boy had blinded several horses and was interested to write why somebody would do that.

“He came up with this whole story of the psychiatrist who is looking at the young boy, while at the same time questioning himself which is the disturbing part, because we want somebody to tell us what’s right and wrong.

Somebody in that kind of authority not to turn around and go, I don’t know who am I to question whether this boy and his worship are wrong.”

‘Equus’ is directed by Ned Bennett, a sought-after director whose credits include ‘An Octoroon’, ‘Yen’ and ‘Pomona’ and the production is a collaboration between English Touring Theatre and Theatre Royal Stratford East.

The show is very dynamic with actors playing horses and there are two actors, Ira Mandela Siobhan (who plays a horse called, ‘Nugget’) and Keith Gilmore (‘Horse’), “who are very exceptional in their physical ability”, she says. When you see them in a beach scene – where the Strang family are enjoying a summer holiday – and Alan gets on Horse it is a sight to behold.

“Ned has made the horse quite human and when we see Ethan (Alan) with the horse, we see the beauty and feel his passion and love.

“Here is somebody who is admiring and stroking and being next to something wonderful and that is what we feel in the theatre and if we feel that and then I think, we also feel like Dysart as to whether we should question this passion, this worship.”

‘Equus’ was first performed in 1973 at the National Theatre and it opened on Broadway the following year and won the Tony Award for Best Play and Best Director in 1975.

It was also turned into a film in 1977 directed by Sidney Lumet and it was revived in the West End in 2007 with Daniel Radcliffe (as Alan) directed by Thea Sharrock.

The current revival is set during the original period when the play was written and the costumes and design echoes that look.

“What is really lovely is I am revisiting my time when I grew up, I was born in 1968 and grew up in the 1970s, so it’s nice remembering that time,” she explained.

“It’s a simpler time, the language is like we’re speaking properly, almost in an old fashioned way and it is simpler storytelling.

“It’s nice to set it in that period, but it’s done very simply with simple costumes, simple little things.

“We don’t have a set, we have more lighting and sound to create the scenes, but just being in those clothes puts you back in those times and it adds to that ‘thrillerness’, because there is something interesting and dangerous about this right from the beginning.”

It can also be argued the playwright, Shaffer, was exploring the new approach to psychiatry where doctors tried to understand their patients in an analytical approach rather than undertake lobotomies as a method of cure.

Dora is a religious woman and introduces her son to the whole idea of ‘worship’ and it becomes centred around horses – while father Frank (Robert Fitch) is oppressive and an atheist. These countervailing standpoints may explain some of the turmoil Alan experiences.

Kumar is the mother of two teenage daughters and when she is not the mother on stage, she doubles up to play a horse, which she did enjoy – albeit her part was small – however she had some hesitancy of putting herself in shorts.

“I came from small-scale theatre, we were always very physical and played a hundred parts and being on stage.

“I am not happy that I have got shorts on – and portraying horses – there was this flesh on stage.

“It’s a thing as you get older showing your body on stage and even talking about the nudity on stage – because ‘Equus’ is known for its nudity – everybody I mention this play to says ‘that’s the play with the naked boy and horse’. I think that is what everybody remembers – it’s the naked play!”

Kumar, who is of an Indian background was born and raised in Croydon. Her parents were very strict, so she got into performance from watching television programmes. She has two older sisters, who both rebelled – which enabled her to pursue her passion for acting initially by working in small scale theatre, and then later on by studying drama at the Bristol Old Vic school.

In recent years, Kumar has been seen on television in ‘Line of Duty’ (Series 4), ‘Vera’, ‘Coronation Street’, ‘Apple Tree Yard’, and in theatre in ‘Pink Sari Revolution’ (Curve),’ Made in India’ (Tamasha) and ‘Midnight’s Children’, and ‘Much Ado About Nothing’ for the Royal Shakespeare Company to name just a few.

She will next be in ‘Life of Pi’ in a new adaptation by Lolita Chakrabarti.
“I have been very much a jobbing actor and have been this profession working for 30 years now and lucky to still be in it.”

www.asianculturevulture.com saw ‘Equus’ at Theatre Royal Stratford East but the show is currently on tour until May 11 at the venues below.